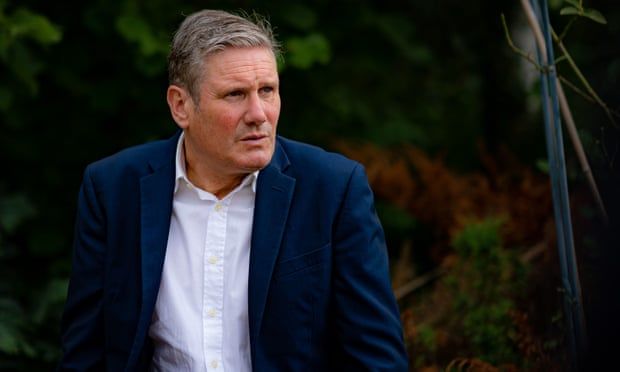 Labour has condemned the prime minister’s plan for a 1.25 percentage point increase in national insurance contributions (NICs) as unfair – but has so far declined to say how it would raise the funds.

Asked for his alternative to the NICs rise, Starmer said, “When it comes to funding it, I wouldn’t look to working people and have a tax hike on them. I would say that those with the broadest shoulders should pay.”

He added: “Those that earn their income from things other than work, should pay their fair share.” Pressed on whether that could include a wealth tax, he said: “People who earn their money from property, dividends, stocks, shares – capital gains tax, these should all be looked at as a broader, fairer way of raising taxes.”

Asked again whether he favoured wealth taxes, he replied: “I think we should look at all of these options.”

Leftwing MP Richard Burgon has recently called for a 10% tax on the assets of the super-rich who have over £100m in wealth.

Jeremy Corbyn’s radical 2019 manifesto included a pledge to tax capital gains and dividends at ordinary income tax rates, narrowing the gap between the tax treatment of earned and unearned income.

There was also a commitment to examine the idea of a land value tax, which could be levied on homeowners and businesses in proportion to the value of the property they own. The Conservatives responded to this idea by claiming Labour wanted to impose a tax on gardens.

Starmer has come under pressure to say more about how Labour would fix the crumbling social care system. Some senior Labour figures have been dismayed at the party’s lack of a fully worked-up proposal, despite widespread reports for several months that the Conservatives were about to produce their own.

The Manchester mayor, Andy Burnham, has said Labour should put forward its own proposal at its annual conference in Brighton later this month.

Burnham, who worked on social care reform as Labour’s health secretary a decade ago, said the annual conference, which kicks off in just over a fortnight, would be a good time to make the party’s position clearer.

“We have a government plan here, I think they’ve gone down the wrong path because they’ve loaded the whole cost of social care on the shoulders of younger people, lower-paid people, people who have student debt, people struggling to get on the housing ladder, I don’t think that’s fair.”

He added: “There’s an opportunity here for Labour to set out a much better alternative and I would say to them I think they should do that sooner rather than later, but the conference would be a good time to do that.”

Burnham has said more money for social care should be raised through a 10% levy on estates, instead of a national insurance increase. When the plan was originally mooted after cross-party talks before the 2010 general election, the Conservatives called it a “death tax”.

Labour’s annual conference will be Starmer’s first opportunity to address party members en masse, and aides say he spent part of his summer holiday in Devon working on his speech.

Johnson’s health and social care plan was comfortably passed by MPs on Wednesday. Starmer whipped his MPs to vote against the plan – prompting Conservative MPs to claim Labour had rejected extra funding for the NHS and social care.
#Boris Johnson  #Johnson
Add Comment