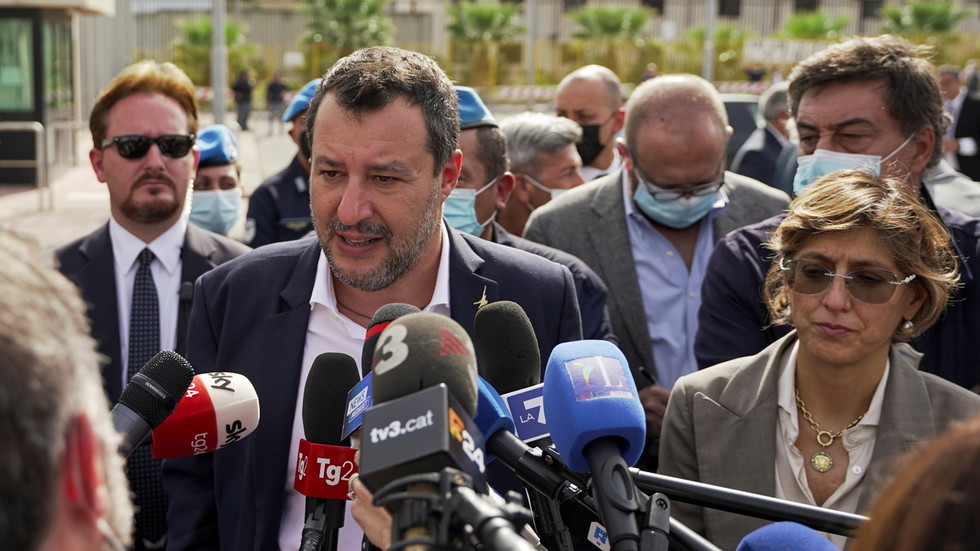 Former Italian interior minister Matteo Salvini is facing up to 15 years in prison in a controversial trial over his 2019 order to prevent migrants picked up by NGOs while crossing the Mediterranean Sea from entering Italy.

The trial, which started on Saturday in Palermo, is about one particular incident among dozens that happened during Salvini’s tenure as interior minister. It concerns his refusal to allow 147 migrants to disembark in Lampedusa in August 2019. The stand-off lasted for about 19 days before a court overruled a ban on private rescue ships entering Italian waters.

Salvini is the leader of the right-wing, anti-immigration Lega Nord (North League) party. He held the offices of deputy prime minister and interior minister in an unorthodox coalition government with the left-wing Five Star Movement (M5S) at the time his alleged crimes occurred. He is accused of abusing his power and kidnapping the migrants and may face up to 15 years in prison if convicted.

The trial was initially scheduled for September 15, but was postponed for over a month so that a larger courtroom could be found to accommodate more people interested in the procedures, including journalists.

A defiant Salvini tweeted a photo from the scene, saying his prosecution was “required by the left and the fans of illegal immigration”. Ahead of the hearing, he said illegal migrants were arriving in Italy by their hundreds under the current government and that he was simply doing his duty as interior minister when he attempted to stop the inflow.

Salvini said the policy to block migrants was approved by the entire cabinet, including the then-prime minister, Giuseppe Conte, who is now the leader of M5S. Conte, Interior Minister Luciana Lamorgese and Foreign Minister Luigi Di Maio are scheduled to appear as witnesses during the trial.

Actor Richard Gere, who helped deliver food to people on board the stranded ship, which was operated by the Spanish NGO Open Arms, previously agreed to testify as well. It’s unclear if he will take the stand in Palermo.

Outside the courtroom, Open Arms founder and director Oscar Camps defended his operation. “Saving people isn’t a crime, but an obligation not only by captains but by the entire state,” he told journalists.

Opponents of such rescue missions say people who sail towards European shores in boats and rafts are economic migrants rather than political refugees who need protection. Many suspect NGOs like Open Arms of facilitating the flow, if not directly colluding with human traffickers in countries like Libya, who organize the rides for profit.

Many of Salvini’s supporters believe his trial to be politically motivated. The Italian parliament lifted his immunity from prosecution in February 2020, long after the Lega-M5S government collapsed. Lega Nord was in opposition to the second Conte government, which was in power at the time. Senators from Salvini’s party boycotted the vote.

In May, a court in Sicily dismissed a similar “kidnapping” case against the former interior minister, which stemmed from a separate episode. The case involved a coast guard ship carrying migrants that was kept from docking in the port of Catania for six days in July 2019.