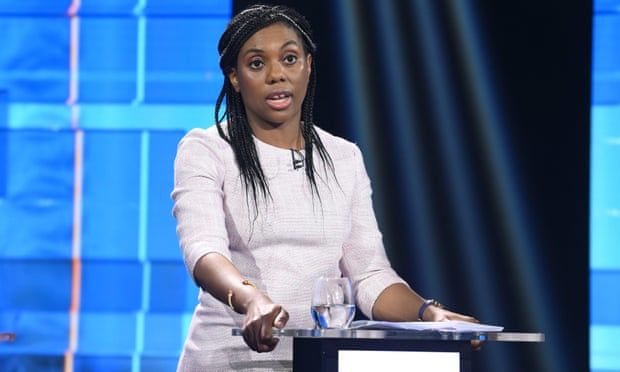 MP joins the four other candidates in saying they would not unpick UK’s environmental commitments
Kemi Badenoch has backed the government’s target of reaching net zero emissions by 2050 and vowed not to unpick current climate commitments in an apparent U-turn at the Tory leadership environment hustings.

The MP for Saffron Walden had previously likened the target to “unilateral economic disarmament” but under questioning from Alok Sharma, the Cop26 president, at the hustings in parliament on Monday she said she backed it.

Chris Skidmore, the chair of the all-party parliamentary group for the environment and organiser of the hustings, said: “For most people watching this debate, they were terrified that someone would think they have a mandate to unpick our climate commitments. Alok [who chaired the hustings] was quite tough and made sure that they all got on the record supporting net zero and our climate commitments. Now all five have.”

Badenoch, Liz Truss, Rishi Sunak, Penny Mordaunt and Tom Tugendhat were each given about 15 minutes to lay out their climate plans to an audience of 40 Tory MPs and peers, at the event run by the Conservative Environment Network. It took place in the sweltering heat of the House of Commons committee rooms during the hottest day of the year so far.

MPs who attended the closed hustings said they were pleasantly surprised; after a contest during which it was difficult to get candidates to even say they would commit to environmental pledges, there seems to have been a change of heart and most candidates rose to the occasion with some interesting environmental policy ideas.

Rebecca Pow, a former environment minister, was asking questions at the hustings. She said afterwards: “They all seem to ‘get it’, some have more knowledge than others but they all committed to current policies and I think they all came over very strongly.”

Pow is backing Sunak and said she felt his answers were the strongest: “He more than anyone understood about how you use land to increase biodiversity and reduce emissions, but they all made really good points, especially on things like energy efficiency.”

During the contest, biodiversity and nature restoration have not been mentioned much. Some MPs have been concerned that the new prime minister would not be as interested in attending the Cop15 nature summit later this year. The former chancellor Sunak said the conference in Montreal, Canada, in December was “very important” but did not commit to attending. Truss, the foreign secretary, gave the strongest response according to the audience, telling them that not only would she attend, she would lead a delegation.

Truss also said she wanted to look again at the EU’s habitat directive and instead have a stronger, British biodiversity target, based on animals and plants that are endangered here rather than in the EU as a whole. Sunak surprised those present during a speech otherwise focused on finance and technology by saying peat restoration was his “pet project” and was the equivalent of Britain’s rainforest.

Sharma’s intervention in the Observer at the weekend in which he said he may resign if a Tory leader did not back net zero appeared to have made a difference, with Truss quipping her “main priority is making sure Alok doesn’t resign”.

Skidmore said there had been a shift in focus after the weekend, with all candidates wanting to seem strong on the environment.

He explained: “I think it’s the heatwave, and I also think Alok’s intervention made a difference. There’s also been a number of briefings behind the scenes. But also once you had Rishi and Liz backing the net zero commitments, suddenly everyone wants to and there’s a tipping point.”

Candidates appear to have spent the weekend coming up with more detailed policy on the environment. Mordaunt said she would like to increase investment in marine renewable energy, while Tugendhat argued for increasing green industry in the UK rather than offshoring jobs to countries with laxer emissions standards. Tugendhat also said voting against cracking down on sewage pollution was his greatest regret in parliament, and said as prime minister he would prioritise preventive measures.

Sunak said he focused on “growth, markets and innovation” as a way to reduce emissions and meet net zero as well as growing the economy. He also vowed to improve the country’s housing stock, saying we have the “worst houses in Europe” for energy efficiency. He said Northern Ireland had an effective energy efficiency strategy that England could copy.
Add Comment