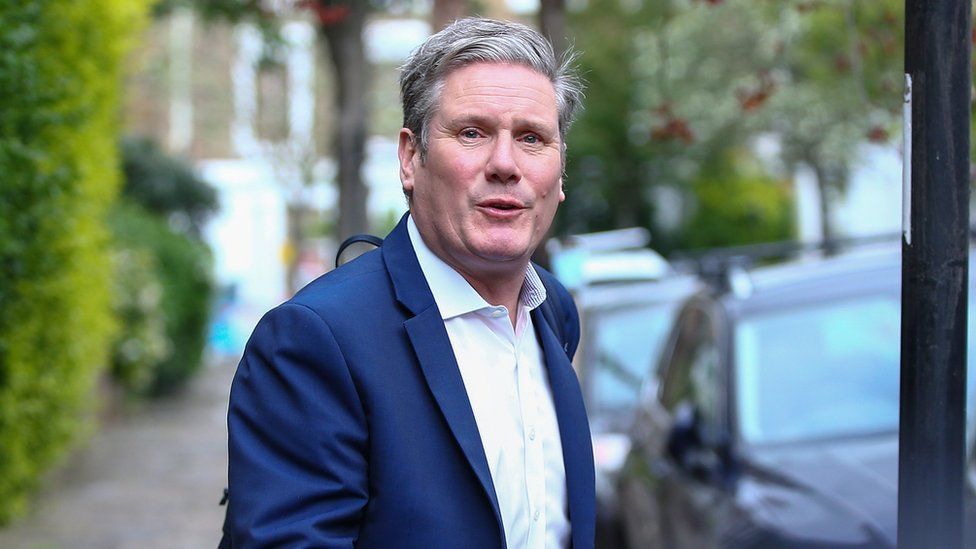 Sir Keir Starmer is facing further questions over whether he broke Covid lockdown rules at an MP's office in Durham, amid reports a leaked Labour memo suggested time was set aside for him to eat dinner with colleagues.

Durham police are investigating last April's event, when the Labour leader had beer and curry with others.

The Mail on Sunday published what it said was a memo showing timings for "dinner", before the visit would end.

A Labour spokesperson said he had eaten "between work demands".

A party source added that it would be "wrong to assume" activities during the visit occurred at the times originally planned.

Sir Keir was filmed drinking a bottle of beer in the constituency office of Durham MP Mary Foy last year, in the run-up to a by-election in nearby Hartlepool.

The Labour leader has maintained the visit was a work event, and that the food and drink was consumed in between doing work, so was within the rules.

But the internal planning document for the Durham trip apparently showed how an hour and twenty minutes were scheduled for "dinner" - after which, the visit would conclude.

The memo said a takeaway order would be placed by a member of Sir Keir's office from a nearby Indian restaurant for a meal between 20:40 and 22:00.

Covid rules in place at the time meant it was illegal for people in England to socialise indoors with people from outside their household or support bubble.

There was an exemption for "work purposes", although working from home was recommended in the guidance, but the rules did not mention socialising at work.

Describing the meal earlier this week, Sir Keir said that "at various points people went through to the kitchen, got a plate, had something to eat, and got on with their work". He has also previously insisted he returned to work afterwards.

Last week, Labour said Angela Rayner was also at the event, after previously denying she was there. It blamed a "mistake" in communication.

The real reason all this matters is less about what happened a year ago. And rather more about what Sir Keir Starmer has said since.

He has repeatedly expressed his outrage - shared by millions - at the behaviour of the prime minister and others in government in breaking the Covid rules.

And he's repeatedly called for Boris Johnson to resign.

Now his critics say if you get on a moral high horse, it might turn into a bucking bronco if you've broken the rules yourself.

Ministers I've spoken to are cock-a-hoop at this latest twist in this long running row about political conduct during Covid.

The Labour leader finds himself in a very perilous position.

Asked whether he would resign if fined, Sir Keir told reporters on Saturday: "I was working in the office. We stopped for something to eat. There was no party".

He said he would not resign and would lead Labour into the next general election.

Former shadow home secretary Diane Abbott said Sir Keir should consider his position as Labour leader if he is fined by police for breaking Covid laws.

Ms Abbott told LBC radio that she didn't think he would be fined, and criticised "hype built up by the Tory press".

But she added that if he did receive a fixed penalty notice, he would have to "consider his position". She insisted she was a "loyal supporter" of Sir Keir's, and was simply making a "common-sense point".

Durham police had initially decided no offence had occurred after reviewing footage from the gathering earlier this year.

But after Thursday's local elections concluded, the force announced it would launch an investigation after receiving "significant new information".

The force had been coming under pressure to revisit the matter after Mr Johnson, his wife Carrie and Chancellor Rishi Sunak were fined for attending a birthday party for the prime minister in Downing Street in June 2020.

Conservative MPs have also been calling for the force to launch a formal probe in recent days.

Sir Keir has urged Mr Johnson to resign since January, when the prime minister became embroiled in accusations Covid rules were broken during gatherings held in Whitehall during lockdown.

The Metropolitan Police are continuing their investigation into 12 gatherings held in Downing Street and the Cabinet Office during 2020 and 2021.

Asked what Sir Keir should do if he is fined, Education Secretary Nadhim Zahawi told Times Radio: "We've got to let the police carry out their investigation and that's only right and responsible.

"I do think, though, that the public will be uncomfortable with the hypocrisy.