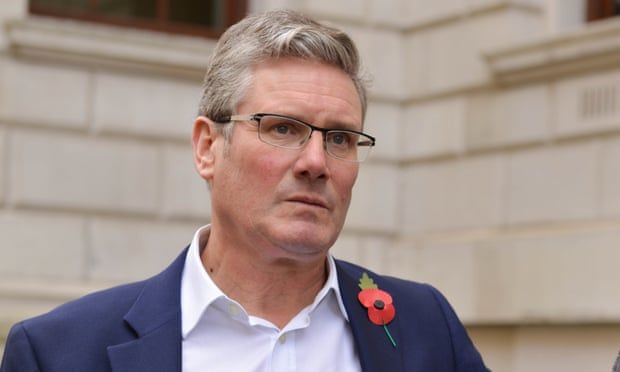 Keir Starmer ‘decided himself not to take lucrative second job’

Spokesperson denies claim Labour leader told not to take on work in 2017 as Corbyn thought it incompatible
Keir Starmer decided himself not to take a lucrative second job at law firm Mishcon de Reya in the summer of 2017, a spokesperson for the Labour leader has insisted.

Jeremy Corbyn’s allies have claimed Starmer was instructed not to take on the job by Labour’s then political director, Katy Clark, because Corbyn, then leader, believed it to be incompatible with his role as shadow Brexit secretary. “Katy Clark passed on the requirement to Keir: it was not a request,” said one Corybn-era source.

Two sources also said Corbyn raised at a shadow cabinet meeting his general view that senior frontbenchers should not take on second jobs, adding that the then leader did so without naming Starmer specifically.

However, a spokesperson for Starmer flatly denied that account of events on Thursday, calling it “completely untrue”. “Keir had already said no to the offer before the leader’s office were even aware of it,” the spokesperson added, referring to Corbyn’s immediate team.

The contradictory accounts underline the continuing deep suspicion between Starmer’s team and that of his immediate predecessor.

The Labour party is embroiled in costly legal action against five senior members of Corbyn’s inner circle over claims they leaked a contentious internal report.

Corbyn remains suspended from the Labour whip over his response to the publication of a critical report by the Equality and Human Rights Commission about the party’s handling of antisemitism complaints.

Starmer had held discussions in mid-2017 with the City law firm about advising its “academy” – described on the company’s website as, “Mishcon de Reya’s in-house place of learning, our driver for growth and a platform for thought leadership”.

According to Starmer’s register of financial interests, he had previously spent four months in 2016 as a legal adviser to the academy. He was paid £4,500 a month for six hours’ work, but gave up the role when he joined Labour’s frontbench as shadow Brexit secretary.

His allies said that as soon as he was approached the following year, Starmer knew the job was incompatible with being in the shadow cabinet.

At the time, the Conservative MP James Cleverly raised the question of the job publicly. He wrote to Starmer to say: “Members of the public will rightly detect a conflict of interest between your paid work for a law firm and your important role on the frontbench.”

Starmer then released a statement saying he had “decided not to further the discussions”.

The Labour leader was asked on Sky News earlier this week about whether he was wrong to have been in talks with the law firm. “No I wasn’t,” he replied. “There was discussion, nothing happened.”

Labour’s 2019 manifesto included a commitment to ban MPs from taking on any paid second job at all. Its current policy is that MPs should not carry out political consultancy.

More than a quarter of Conservative MPs have second jobs, making a total of more than £4m in extra earnings in a year, according to Guardian analysis.
Add Comment