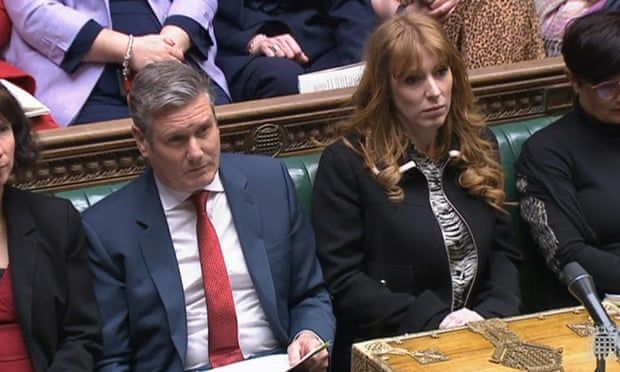 Labour leader and deputy have promised to resign if found to have breached Covid rules by eating curry and drinking beer at event
Keir Starmer and Angela Rayner have returned questionnaires to Durham constabulary, giving their account of a gathering during last year’s local election campaign, the Labour party has confirmed.

The pair have both promised to resign if they are found to have breached Covid rules by eating a curry and drinking a beer at the event, which was caught on camera.

Starmer has repeatedly said he is convinced no rules were broken, but Durham constabulary announced last month they would investigate, after local MP Richard Holden pressed them to pursue the issue.

Senior party officials have begun tentative planning for a leadership contest should the pair have to step down, the Guardian understands. The party would then face having no clear interim leader, with its leader and deputy having been forced to resign.

John Healey, the shadow defence secretary, is the name most mentioned as potential interim leader, though some on the party’s national executive committee (NEC) favour it being offered to Harriet Harman, who performed the role during the 2015 leadership election. Harman has said she will stand down at the next election.

The NEC would select the caretaker leader while a contest took place, with Healey’s name in the frame because most of the senior members of the shadow cabinet are likely to be either candidates or closely associated with a candidate.

The mayor of Greater Manchester, Andy Burnham, the favoured candidate of many MPs, would not be able to run in a snap leadership election except in the event of a rule change by the NEC to allow non-MPs to run. One source close to the committee said there was “absolutely no way” of that change happening.

Another said they did not think there would be any merit in changing the rules and forcing the party to then go through “three more months of hell” as it scrambled to find Burnham a seat and face a mayoralty byelection.

However, one senior party source suggested the upheaval that would be unleashed by the abrupt departure of Starmer and Rayner might persuade some NEC members to open the way for Burnham. “In an unstable situation, there could be all sorts of deals done.”

Some in the party executive’s centrist bloc – which is now dominant under Starmer – have made tentative plans to attempt to persuade MPs they should rally behind just two candidates, which could then be put to a vote by members.

There is no guarantee that strategy would be successful. After rule changes last year, MPs would need to get at least 40 MPs to back them in order to reach the ballot paper.

There is no candidate from the party’s left likely to reach the required number, amid a split in the Socialist Campaign Group between veterans of the Jeremy Corbyn years such as John McDonnell and Jon Trickett and younger more ambitious left-wing MPs who formed the Love Socialism group, including Clive Lewis, Alex Sobel and Lloyd Russell-Moyle.

One outsider candidate who might win some support from the party’s left is the shadow mental health minster Rosena Allin-Khan, who ran for deputy leader in 2020. Allin-Khan was widely expected to be promoted in Starmer’s reshuffle but stayed in her role and attends the shadow cabinet in that capacity.

The only other plausible candidate is Dawn Butler, who was closer to Corbyn, Starmer’s predecessor as Labour leader, though she is less likely to win as many votes from the party’s soft left, which she would need to do in order to get on the ballot.
#Covid
Add Comment