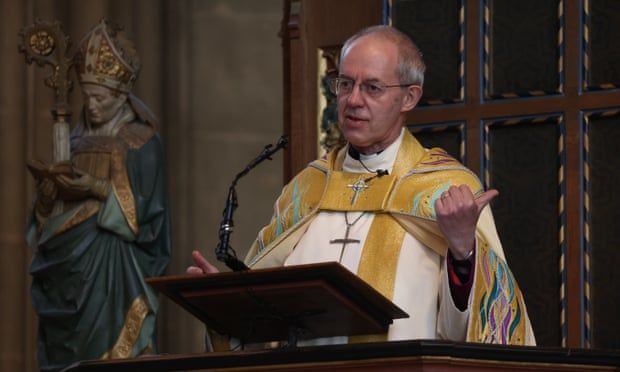 Justin Welby, the archbishop of Canterbury and leader of the global Anglican church, has sought to mollify conservative bishops around the world by “affirming the validity” of a 1998 declaration that gay sex is a sin.

He told more than 650 bishops attending the once-a-decade Lambeth conference that, for “a large majority” of conservative Anglicans, questioning biblical teaching was “unthinkable”.

Welby said: “In many countries, [it] would make the church a victim of derision, contempt and even attack. For many churches, to change traditional teaching challenges their very existence.”

In a letter sent to bishops shortly before what was described as a “robust discussion” on sexuality, Welby said the 1998 resolution, known as Lambeth 1.10, was “not in doubt”.

But he also indicated that he would not seek the authority to discipline or exclude churches – including those in Scotland, Wales and the US – that conduct or bless same-sex marriage.

And in a hint at possible future change in the Church of England, he told the conference that for churches in liberal democracies, not updating traditional teaching could also challenge their very existence. They, too, could be “a victim of derision, contempt and even attack”.

Speaking after the session, Michael Curry, the primate of the US episcopal church, who shot to global fame when he preached at the wedding of the Duke and Duchess of Sussex, said churches exist in “very different cultural contexts”.

In the US, “it would have been unthinkable for us not to bless and sanctify loving relationships between LGBT folk”. It was the first time that Welby had said publicly he understood the reasons for that, he added.

However, some campaigners for LGBTQ+ equality within the church were angry at Welby’s attempt to reaffirm the church’s traditional stance. Jayne Ozanne said: “Yet again priority has been given to saving a manmade institution over protecting LGBTQ+ people’s lives.

“Let us be clear that Lambeth 1.10 encourages ‘conversion therapy’ and negates the God-given love between two individuals. It is a stick with which many of us have been beaten and will continue to suffer under around the world.”

Ninety bishops, including eight archbishops, signed a statement saying “many LGBT+ people have historically been wounded by the church and particularly hurt by the events of the past few weeks”.

They added that they “look forward to the day when we all may feel truly welcomed, valued and affirmed”.

Meanwhile, conservative church leaders from the global south called on bishops at the conference in Canterbury to explicitly restate the 1998 declaration.

Lambeth 1.10 rejects “homosexual practice as incompatible with scripture” and “upholds faithfulness in marriage between a man and a woman in lifelong union”. It says same-sex unions should not be legitimised or blessed.

The Global South Fellowship of Anglican Churches, which claims to represent 75% of Anglicans across the globe, said 1.10 “explicitly applies the clear and historic teaching of scripture to matters of sexual morality”.

Justin Badi Arama, the archbishop of South Sudan, said: “We are living at a time of great spiritual confusion and moral flux. The church of Jesus Christ cannot afford to lose its moorings in holy scripture and drift with the world.

“Based on the need to establish clear doctrine on marriage and sexuality at this defining moment for the Anglican communion, this conference must reaffirm the biblical teaching of Lambeth conference 1998 resolution 1.10.”

Badi said he was confident a majority of bishops attending the conference would back his call.

He said all Anglican bishops should be “preaching the good news of Jesus Christ … If we do not respect the scriptures, we are saying God is wrong.” Bishops in same-sex relationships or who supported same-sex marriage had “distanced themselves from the way of God”, he added.

The issue of sexuality – or human dignity in conference parlance – is the most contentious in the 12-day meeting, which has been postponed twice from 2018. Divisions over same-sex relationships have been a running sore in the Church of England and the global church for decades.

Anglican churches in Scotland, Wales, the US, Canada, New Zealand, Brazil and Mexico either conduct or bless same-sex marriages. The most determined opposition comes from churches in sub-Saharan Africa, with the archbishops of Nigeria, Rwanda and Uganda boycotting the conference.