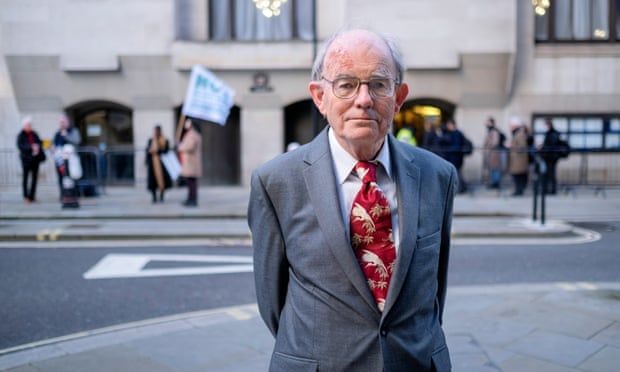 Chris Mullin is challenging action by West Midlands police at Old Bailey to make him reveal source’s identity
A former MP and investigative journalist has refused to divulge the sources of his information about the 1974 Birmingham pub bombings in a hearing at the Old Bailey.

Chris Mullin, 74, is challenging an application by West Midlands police to require him to disclose source material dating back to his investigation in 1985 and 1986.

Mullin has refused to divulge the information that would reveal the identity of the man who confessed his role in the bombings to him in an interview years ago, in the action brought under the Terrorism Act of 2000.

He said that if the application were to succeed it would “set a precedent which could be used to undermine the freedom of journalists to investigate alleged miscarriages of justice and other matters in cases involving terrorism”.

“This is a unique and deeply concerning case, especially to anyone who cares about public interest investigative journalism in this country,” Gavin Millar QC, for Mullin, told the recorder of London, Mark Lucraft.

“After the Birmingham pub bombs my client tracked down and interviewed a person who was prepared to own up in detail to having planted the bombs. The person did so reluctantly, not to promote terrorism or proclaim their role in the bombings but so that Chris Mullin could show that the Birmingham Six were – as the whole world subsequently came to know – innocent.

“Now the state – in the form of the West Midlands police, the very force that was responsible for failing to investigate the bombings properly at the time and instead framed six innocent men – seeks an order under the Terrorism Act forcing him to hand over documents in his possession to enable them to identify the person he interviewed.”

Earlier, James Lewis QC, for West Midlands police, told the hearing that one of the men responsible for the bombings, only described in court as AB, in which 21 people died and more than 200 were injured, had made a “voluntary, reliable confession” to Mullin.

“The real perpetrators have never been brought to justice,” said Lewis. Now the West Midlands police were reinvestigating the case and relatives of those killed in the bombing were “campaigning for justice for their loved ones”. He argued that there was a “strong and compelling public interest” in the court making a disclosure order because of the gravity of the case.

Mullin has declined to provide data, including unredacted notes and notebooks, because the information was given on the understanding that he would never reveal his source.

Mullin said in his statement that “I hold no brief for the terrorists responsible for this atrocity … I have every sympathy with those whose loved ones died and were I in their place I, too, would want those responsible to face justice.”

He added that “it must be said that at the time [when he published his initial findings], the West Midlands police were completely uninterested in pursuing any such line of inquiry. This would have required them to acknowledge that they had framed six innocent men … I believe my actions were overwhelmingly in the public interest.”

The court heard that Mullin had written an article in which he stated that “I know the names of the bombers … I will never name him.”

Mullin briefly responded to questions in court from Lewis about the identity of his sources by responding twice: “I am not prepared to say.”

A decision on the seeking of disclosure was reserved.
Add Comment