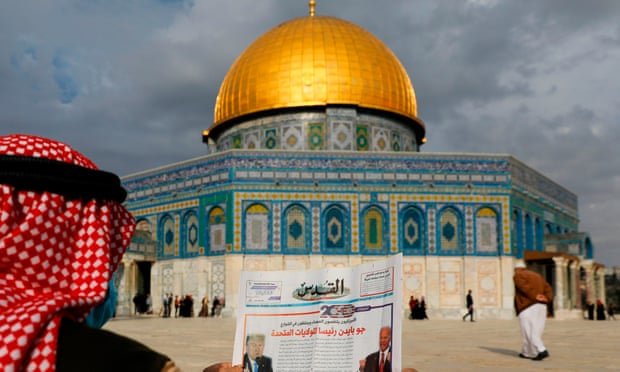 Jordan scrambles to affirm its custodianship of al-Aqsa mosque

Amman fears warming Israel-Saudi relations may threaten its hold on holy Islamic site
Jordan is scrambling to affirm its custodianship of the al-Aqsa mosque in Jerusalem after a meeting between Israeli and Saudi leaders raised fears in Amman that the fate of one of Islam’s holiest sites could be up for grabs in a normalisation deal between the two countries.

Warming relations between Saudi Arabia and Israel, capped by a weekend visit by Benjamin Netanyahu to the Saudi crown prince, Mohammed bin Salman, have alarmed Jordanian leaders already unnerved by Riyadh’s regional posturing. They fear al-Aqsa could be in play as the Trump administration tries to secure a regional legacy in its dying weeks.

Without apparent prompting, the Jordanian foreign ministry released a statement on Wednesday night challenging “attempts to alter the historical and legal status quo” of the mosque. A spokesman, Daifallah al-Fayez, said: “The kingdom will continue its efforts to protect and care for the mosque, and preserve the rights of all Muslims to it in compliance with the Hashemite custodianship of Jerusalem’s Muslim and Christian holy sites.”

The statement followed a call between the US president-elect, Joe Biden, and Jordan’s King Abdullah II, a member of the Hashemite dynasty, which has governed the Jerusalem sites, known as Haram al-Sharif, since 1924, the same year the Saud dynasty was given control of Mecca and Medina.

Tutelage of al-Aqsa and the Dome of the Rock has been a key source of legitimacy for Jordan’s ruling Hashemite dynasty for nearly a century, pre-dating the creation of Jordan and Israel and prevailing throughout seven tumultuous decades of stalemate, war and eventually peace. In the quarter century since both sides formalised ties, the pact has been central to the deal’s stability.

Jordanian leaders now fear Donald Trump, his vice-president, Mike Pence, and the secretary of state, Mike Pompeo, along with Netanyahu, may be tempted to change that dynamic by offering the sites to Saudi Arabia as the centrepiece of a normalisation deal. The impact of such a move would dwarf that of the pacts signed in recent weeks between Israel, the UAE and Bahrain.

Improving relations between Saudi Arabia and Israel have been near the top of the outgoing US president’s Middle East wish list, as has bolstering Riyadh at the expense of its foe Iran, which vies for supremacy as the standard bearer of Islam and disputes Saudi Arabia’s guardianship of the two holy shrines, Mecca and Medina.

Adnan Abu-Odeh, a former senior aide to both King Abdullah and his father, King Hussein, said guardianship of the Haram al-Sharif had been the cornerstone of the Hashemite dynasty and a sense of pride for Jordan. He said the arrangement was mentioned in the peace treaty signed between the two states, meaning Jordan’s claim on retaining the status quo was strong.

“Historically the religious aspect was key in the legitimacy of the ruler and the Hashemites, after leaving Hejaz, derive their legitimacy from Jerusalem,” he said. “Israel practises pressure and extortion over Jordan with the custodianship matter and they threaten to give it to the Saudis and it is not far fetched, and I believe his majesty the king understands that.”

The Hashemites, the rulers of modern-day Jordan, controlled the holy city of Mecca for centuries until it was conquered in 1924 by the House of Saud. The city and another of enormous religious significance, Medina, were incorporated into Saudi Arabia, while al-Aqsa fell under Hashemite control. Ever since, the two powerful bloodlines have been engaged in a struggle for influence, which has been increasingly dominated by Saudi Arabia, bolstered by oil dollars and US patronage that have transformed the kingdom into a regional heavyweight.

“I don’t think the Saudis will be in a hurry to give Mr Netanyahu, or even Mr Trump right now, more credit because they have to deal with four years of a potentially not very friendly American administration [if they did].

“Many Jordanians … [are] being vigilant about this. Netanyahu … might find it to be worthwhile giving this to the Saudi royal family rather than keep it with the Hashemites because that would probably bring him the prize he’s seeking, which is open and declared normalisation with Saudi Arabia.”

Elie Podeh, a professor of Middle East studies at Hebrew University in Jerusalem, said the fate of the Haram al-Sharif had been tabled by the former Israeli leader Ehud Olmert during peace talks with the Palestinian leader, Mahmoud Abbas, in 2008. “Olmert was very forthcoming on this issue,” Podeh said. “He suggested the Old City of Jerusalem be an international city run by a committee of five – Jordan, Saudi Arabia, the Palestinians, the US and Israel. The idea was raised, but nothing substantial ever transpired.

“The question of Jerusalem might come up in the current context. The Saudis would want to have some role. There is now an opportunity to do something bilateral, and with Trump it would be much easier than under Biden. But whether it would be wise to do so is another thing.”

Sir John Jenkins, a former UK consul general to East Jerusalem and ex ambassador to Riyadh, said such a move would likely have widespread ramifications for Israeli security and for Jordan. “It would radically crush the Hashemite monarchy and it would change the guarantee of sorts that Jordan has been providing for Israeli and regional security. It would be like throwing a grenade into a crowded room.

“As for the Saudis, there would be some appeal there. Iran has always challenged them on the legitimacy of their custodianship of Mecca and Medina. If they were to add a third shrine to their list, it could enhance their claims to be the absolute leaders of the Islamic world.”
#Donald Trump  #Joe Biden
Add Comment