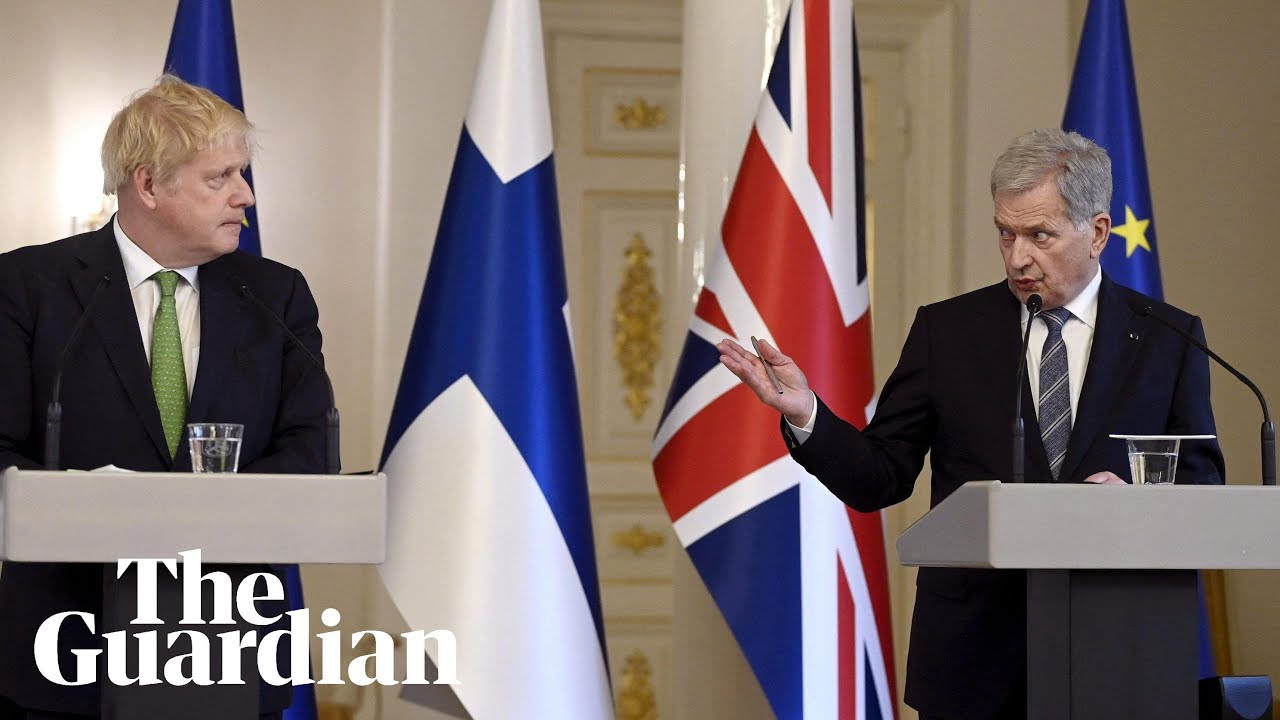 Johnson’s security assurances to Sweden and Finland not just symbolic

Boris Johnson’s offer of British written security assurances to Sweden and Finland was more than a piece of symbolism designed to nudge the two countries over the line into making a joint application for Nato next week, Swedish security experts said.

Although Johnson’s key guarantee is necessarily a political declaration, as opposed to an international treaty guarantee, the British commitment was of high value at a time of great tension, Anna Wieslander, the Atlantic Council’s northern Europe director said on Wednesday.

Johnson’s visits were designed to reassure the populations of both countries that in practical military defence terms key Nato countries, if not Nato collectively, are committed bilaterally to the Nordic countries’ defence if subject to attack or sustained Russian intimidation.

The UK statement goes further than any bilateral guarantees made so far by any other Nato country and is designed to cover the potentially vulnerable transition period between Nato membership application and full membership, the point at which Nato’s full article 5 collective defence protections kicks in. That transition is perceived as the moment of maximum risk for Stockholm and Helsinki and could last as long as 12 months as each of the 30 Nato states must ratify their membership.

In a visit to Washington last week Ann Linde, the Swedish foreign minister, was given a broad security assurance by Antony Blinken, the US secretary of state. Olaf Scholz, the German chancellor also promised to back the Nordics’ Nato membership when the Swedish prime minister, Magdalena Andersson, and her Finnish counterpart, Sanna Marin, travelled to Berlin last week.

Björn Fägersten, senior research fellow at the Swedish Institute of International Affairs, said the British offer “gives an extra layer of assurance in the event of an attack. It is written down and Boris Johnson was quite specific in terms of talking about increased deployments by the military, air force and naval operations.”

Wieslander said “at a time of very high tension in the region, it is of great value, and partly because it builds on what exists already through the agreements made at the time of the setting up of the joint expeditionary force in 2015. It also sends a signal to Russia that a nuclear power is willing to do this. I would expect the US to do something similar.”

The declaration could not come in the form of a fully fledged treaty since that might take as long to ratify as Sweden’s Nato membership.

In a decision that cuts deep into Swedish self-identity, the ruling Social Democrat board will decide on Sunday whether to end 200 years of neutrality, although many say the cooperation between Finland and Sweden with Nato members has been so close it was tantamount to Nato membership.

Leftwing critics have said Sweden is behaving like a reindeer in a herd, running in the same direction as the rest.

Fägersten said the meeting of the Social Democrats governing board was “the key decision point”, and predicted the party would join the non-left opposition parties in backing membership. “The statements from former foreign ministers such as Margot Wallström and the fact that Social Democrats have brought forward the decision to coincide with Finland’s timetable suggest there will be support.”

Asked if he thought Johnson was the best message carrier to take into the Swedish social democratic debate, he said: “I don’t think Brexit or Partygate will affect Sweden’s thinking. We have seen that Britain has been pretty supportive of Ukraine from an early stage, and that has increased its credibility. Britain is a pretty popular country here. We would still like you to be EU members, but we cooperate a lot.”

Support for Nato membership has not trailed off in Sweden since the Russian invasion of Ukraine on 24 February.

A poll conducted by Demoskop for the daily newspaper Aftonbladet showed support for Nato membership still rising and reaching 61 %. The same organisation’s poll published on 20 April showed 57% of Swedes in favour of joining Nato, up from 51% in March.

In addition, more than two-thirds of the Finnish parliament, according to surveys, now supports Nato membership. Finland, an EU member, has managed to balance criticism of Russia with a bridge-building role with Moscow, but may find that role harder to play once inside an alliance seen as Russia’s enemy.

Defence experts are stressing that Sweden could maintain its special role in advocating peace and disarmament by following Norway and Denmark, two founding Nato members, in making a condition of membership a ban on their soil of both nuclear weapons in peacetime and permanent foreign troops. In practice this does not prevent near permanent rotational forces or pre-positioning of supplies.

Security service chiefs have been surprised by the lack of direct Russian disinformation efforts in the Nordic debates, and Fägersten said it was possible that future Russian interference would focus instead in one of the 30 Nato states that would have to ratify the treaty possibly over the next 12 months. He said it was also possible Russia, preoccupied by the Ukraine front, simply did not have the resources to respond to the unforeseen emergence of a new Nato flank.

Asked what kind of disruption was possible, Wieslander said: “The expectations are cyberattack, disinformation campaigns, electronic jamming, intrusions in our airspace, even something more official, that they have moved Iskander missiles into Kaliningrad [a Russian exclave sandwiched between Lithuania and Poland on the Baltic coast], but they have played with this card before. Their methods are designed to be ambiguous.”