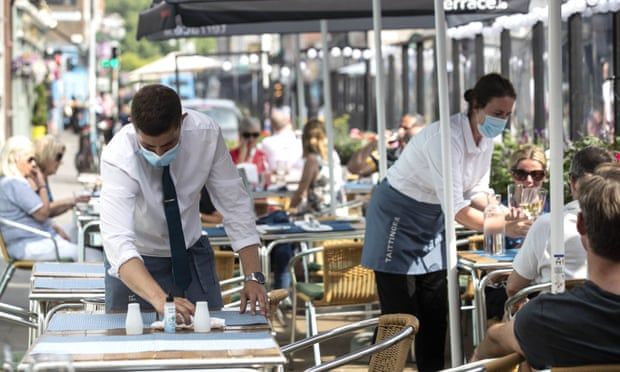 Asked this week about whether his move to drop Covid isolation requirements would drive infectious workers into the office, Boris Johnson said UK workers should learn from their German counterparts and stay home when unwell.

The prime minister did not mention the stark differences in the support available for British workers compared with Germany and the rest of the world, and whether this could explain their reluctance to take a sick day.

Employers’ groups have warned that the UK’s statutory sick pay regime is among the least generous in Europe, and steps by the government to scale back support as part of the “living with Covid” approach, which Johnson announced on Monday, could discourage those who catch the virus from staying at home.

Under the new strategy, support payments of £500 for people on low-incomes in England will end from Thursday when the legal requirement to self-isolate is scrapped. A month later, on 24 March, workers who are off sick will need to once again wait for four days of absence through illness to claim statutory sick pay, rather than from day one, reverting to pre-pandemic rules.

Announcing the plan during a No 10 briefing, Johnson said: “I’ve often heard it said over the last couple of years that we have a habit of going back to work, or going into work, when we’re not well. And people contrast that with Germany for instance where, I’m told, they’re much more disciplined about not going to work if you’re sick.”

Germany has one of the best sick pay packages among all of the OECD group of leading global economies, with laws requiring employers to pay staff 100% of wages for the first six weeks of sickness. By contrast the UK has one of the lowest – at just £96.35 a week it is worth less than a quarter of a typical salary.

The proportion of a UK worker’s salary covered by sick pay is just 19%, according to the TUC. Rates are higher in Spain (42%), Sweden (64%) and Belgium (93%), with support only worse in South Korea and the US, where workers do not have a legal right to any sick pay at all.

“This has been a thorn in our sides throughout this pandemic – undermining public health and pushing workers into hardship,” said Kate Bell, the head of economics and employment rights at the TUC. “But rather than learning this lesson, ministers are doubling down on their mistakes.

“The decision to stop access to sick pay – from the first day of illness – will put millions of low-paid workers in an even tighter financial bind if they become sick.”

Even before the changes announced this week, Britain’s lowest paid tended to miss out on the support altogether.

Analysis from the Resolution Foundation shows as many as 2 million employees are ineligible for statutory sick pay because they earn less than the £120 lower earnings limit required for the benefit. This has meant one in six workers in customer-facing sectors – where the spread of Covid-19 is most probable – receive no statutory sick pay at all. Women are more likely to fall below the threshold, as well as workers on zero-hours contracts.

Early in the pandemic, the government moved to provide statutory sick pay from day one of illness, abolishing three waiting days required to receive the benefit. However, employment experts and unions warned the changes needed to go further.

Johnson’s announcement comes after years of the benefit gradually being eroded to its lowest level since March 2003 after inflation is taken into account, while the soaring cost of living is expected to further damage the safety net this spring amid a huge hike in household energy bills.

In the UK statutory sick pay is paid to employers for up to 28 weeks. Some staff benefit from their firm topping up closer to their full pay under occupational sick pay schemes. However, government estimates made before the pandemic suggested 26% of the workforce rely on statutory sick pay alone when ill.

Business leaders have criticised the government for cutting back a rebate for firms, paid for by the state, when they are required to pay statutory sick pay to their staff during the pandemic.

Mike Cherry, the national chair of the Federation of Small Businesses, said lasting reforms were vital. “Even before the pandemic hit, the government recognised the need for a sick pay rebate for smaller firms, so it’s surprising to see it taking this route forward when hundreds of thousands of people are still testing positive for Covid,” he said.

A government spokesperson said: “The pandemic was an unprecedented situation. We needed people to self-isolate while protection was built up through our vaccination programme and we developed a range of new treatments. As a result, we made temporary changes to statutory sick pay (SSP) to support people to follow Covid rules and keep others safe.

“It’s up to employers to determine their sick pay policies and many employers choose to pay more than the minimum level. But SSP should not be looked at in isolation. Government support through the welfare system, including universal credit, is also available for those on low incomes who need extra financial help when they are sick or incapable of work for longer periods.”