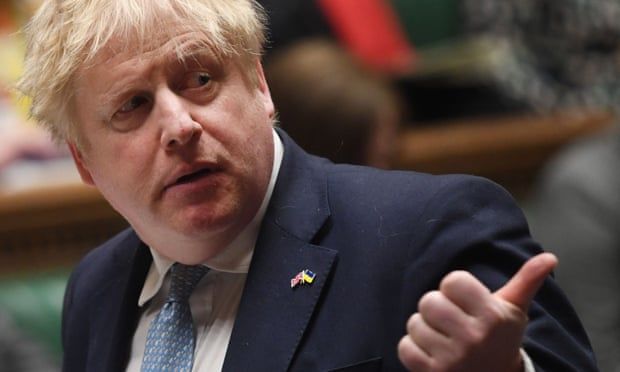 Dominic Raab says there were ‘clearly breaches’, but PM says he won’t give ‘running commentary’

Boris Johnson has repeatedly declined to admit rules were broken in Downing Street during lockdown, despite the Metropolitan police issuing 20 fixed-penalty notices, and Dominic Raab saying there were “clearly breaches of the regulations”.

Raab, who as justice secretary oversees the legal system, suggested in a BBC interview on Wednesday that the Met’s decision to issue 20 penalty notices to people involved in Downing Street gatherings showed the law had been broken.

But when the prime minister was later questioned by MPs on the backbench liaison committee, he repeatedly insisted he would not give a “running commentary”, adding: “I just think it would be wrong of me to deviate from that.”

Johnson also sought to suggest he had tackled some of the problems exposed in the report by the senior civil servant Sue Gray, by changing the leadership structure in No 10.

“I have been several times to the house to talk about this and to explain and to apologise and to set out the things that we were doing to change the way things were run in No 10, and we’ve done that,” he said.

Johnson declined to say whether it would be a resigning matter if he himself received a fixed-penalty notice.

Downing Street has said it will announce if the prime minister receives such a notice, and if the cabinet secretary, Simon Case, does – but will not disclose which other officials have received them.

Earlier, the Labour leader, Keir Starmer, argued that Johnson had misled the House of Commons when he claimed in December, after stories of rule-breaking parties first appeared, that “all guidance was followed”.

“He [Johnson] told the house no rules were broken in Downing Street during lockdown,” Starmer said. “The police have now concluded there was widespread criminality. The ministerial code says that ministers who knowingly mislead the house should resign. Why is he still here?”

Johnson avoided the question, saying: “Of course, the investigators must get on with their job, but in the meantime, we are going to get on with our job.”

Starmer replied by castigating Johnson for having repeatedly insisted he knew nothing about supposed Covid rule-breaking in Downing Street given the Metropolitan police have announced the fines, with others possibly to follow.

“Look, there are only two possible explanations: either he’s trashing the ministerial code or he’s claiming he was repeatedly lied to by his own advisers and didn’t know what was going on in his own house and his own office,” Starmer said, asking: “When is he going to stop taking the British public for fools?”

Starmer’s spokesperson later suggested Johnson’s claim that he could not comment while the police investigation was continuing, was “clearly untenable”. Labour has also suggested that Case, the most senior civil servant in No 10, should resign if he is issued with a fine.

However, Conservative MPs appear to have accepted for now the argument that it would be premature to move against the prime minister when it remains unclear whether he will receive a fixed-penalty notice himself – and before Gray’s full report has been published.

Several Tory MPs have previously said publicly they had sent letters to the 1922 Committee chair, Graham Brady, calling for a vote of no confidence in the prime minister, but some, including the Scottish Tory leader, Douglas Ross, have since withdrawn them.

If 54 such letters were received, a vote of no confidence would be called, and if Johnson lost it, his premiership would be over. Despite the narrowing of the national polls since the war in Ukraine pushed Partygate down the news agenda, some backbenchers insist if the prime minister receives a fixed-penalty notice it should still be a resigning matter.

The Met has not given any estimate of how long its investigations may take, and it has been suggested these first 20 notices are the easy cases, or “low-hanging fruit”.

Scores of Conservative MPs joined Johnson for a dinner on Tuesday evening, aimed at burnishing his links with the parliamentary party.

Starmer used the bulk of his questions at prime minister’s questions to tackle Johnson over the rising tax burden in the wake of last week’s spring statement, asking: “Does the prime minister still think that he and the chancellor are tax-cutting Conservatives?”

“Yes, I certainly do,” Johnson replied, citing the cut in fuel duty in the statement, and the promise to cut income tax rates by 1p in 2024, saying this would mitigate the impact of the rise in national insurance to fund the NHS and social care.

“Cut the nonsense and treat the British people with a bit of respect,” Starmer responded, adding, to laughs from Labour MPs: “I can only hope that his police questionnaire was a bit more convincing than that.”