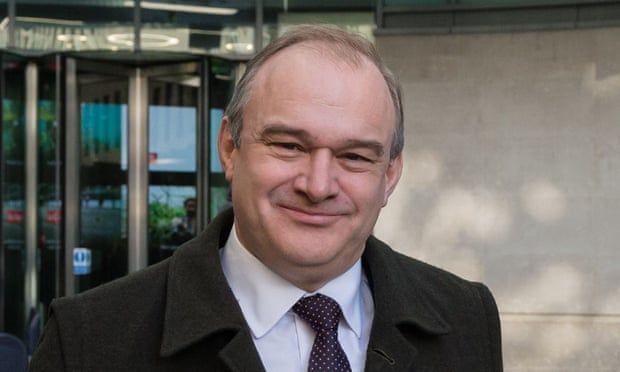 Ed Davey says PM should make it easier for No 10 officials to raise concerns about wrongdoing at work
Boris Johnson should act immediately on Sue Gray’s recommendation to help whistleblowers raise concerns about wrongdoing, the Liberal Democrats have said, arguing the prime minister is “picking and choosing” which parts of her report to implement.

Ed Davey, the party’s leader, has written to Johnson calling for action over what he called “staggering failures” in helping officials to challenge misconduct, and seeking details on how often staff had expressed worries about lockdown gatherings.

The interim report by Gray, a senior civil servant, into alleged breaches of Covid rules inside Downing Street and elsewhere in government withheld most details due to a continuing police investigation into potential lawbreaking.

However, it condemned “failures of leadership and judgment”, and also warned that some staff had “wanted to raise concerns about behaviours they witnessed at work but at times felt unable to do so”.

Gray recommended: “There should be easier ways for staff to raise such concerns informally, outside of the line management chain.”

While Johnson has apologised for the failings, and has since significantly shaken up his senior No 10 team, Davey said there was as yet no evidence of action being taken to help would-be whistleblowers.

“Boris Johnson stood up in parliament and committed to accepting Sue Gray’s findings in full,” Davey said. “But since then he has been picking and choosing what to implement, focusing on strengthening his position instead of preventing future law-breaking in No 10.”

Using a parliamentary question, the party asked the Cabinet Office, which works closely alongside Downing Street, and which was connected to some claims of social gatherings, what whistleblowing guidance it had in place.

The response said that “if individuals suspect wrongdoing, they have a responsibility to speak up”, stressing that this included potentially illegal actions.

In his letter to Johnson, Davey said: “Reading this guidance, it is quite clear that there have been staggering failures in regards to the whistleblowing policy at the top of government. Either staff simply felt unable to raise concerns about continued social gatherings in Downing Street and the Cabinet Office, or their concerns were ignored by senior management.”

Davey said that despite the reorganisation there had been no information on how to assist staff in raising worries: “It is extremely concerning that your response to this highly critical interim report has been to make changes which benefit you, rather than make it easier for your staff to report potentially criminal activity in future.”

He asked Johnson to outline how many concerns about the social gatherings were raised, whether there were any consequences for whistleblowers, and to instruct Samantha Jones, the newly appointed permanent secretary of the new Office of the Prime Minister, to update the whistleblowing policy in Downing Street and the Cabinet Office “as a matter of priority”.

“For the good of the country and for the sake of our national security, we need a culture in No 10 and the Cabinet Office which welcomes staff who blow the whistle – not one in which staff feel unable to speak up,” Davey wrote. “As prime minister, it is incumbent on you to understand the gravity of these concerns and urgently resolve the real problems which Sue Gray has outlined.”

A Downing Street spokesperson said: “We are making immediate changes to No 10 to address the issues identified in the Sue Gray report.

“This week we appointed a permanent secretary to lead the new Office for the Prime Minister. She will be reviewing the structures and operations in place to improve No 10 and ensure the team are supported to deliver on the prime minister’s agenda.”
#Boris Johnson  #Johnson  #Covid
Add Comment