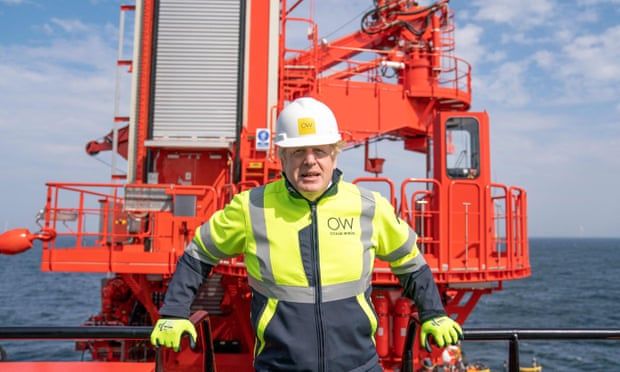 On a visit to Scotland on Thursday, the prime minister made a number of provocative comments, stating that a second referendum on Scottish independence is “about as far from the top of my agenda as it is possible to be”.

Speaking to reporters after a visit to the Moray East offshore windfarm, off the north-east coast of Scotland, the prime minister was questioned about Labour leader Keir Starmer’s remarks on Wednesday that there should be a “hard-edged” timetable for cessation of oil and gas exploration.

Johnson said: “We understand the importance to the north-east of Scotland of the oil and gas industry. The contracts that have been signed should not just be ripped up. But we need to transition as fast as we reasonably can.”

Pressed on whether he wanted to set a firm deadline, he replied: “Look at what we’ve done already. We’ve transitioned away from coal in my lifetime. Thanks to Margaret Thatcher, who closed so many coalmines across the country, we had a big early start and we’re now moving rapidly away from coal all together”.

Dismissing the comments as “crass and deeply insensitive”, the first minister of Scotland, Nicola Sturgeon, said on Twitter: “Lives & communities in Scotland were utterly devastated by Thatcher’s destruction of the coal industry (which had zero to do with any concern she had for the planet).

“To treat that as something to laugh about is crass & deeply insensitive to that reality.”

“These are shameful comments from Boris Johnson, and reveal the Conservative party’s utter disregard for the communities still scarred by Thatcher’s closure of the mines and failure to deliver good new jobs in their place,” she said.

“Without investment in good, green jobs as we move away from fossil fuels, the Conservatives risk repeating the mistakes of the past. It is vital that the green transition is a fair transition.”

The Scottish Greens immediately responded they “wouldn’t allow the Tories to repeat the mistakes of the past”, and would fight for a fair transition for workers.

The party’s Central Scotland MSP, Gillian Mackay, said: “Thatcher’s decimation of the coal industry had absolutely nothing to do with environmentalism – and everything to do with her despicable anti-trade union ideology. It’s no surprise that Boris Johnson eulogises Thatcher, but we must ensure his government doesn’t repeat her actions as Scotland begins to transition from oil and gas to our renewables future.”

Johnson was also pressed on comments made by the Cabinet Office minister, Michael Gove, last weekend, that the UK government would not stand in the way of another independence referendum if it was the “settled will” of voters.

The prime minister said: “The priority for our country as a whole is bouncing back together, working our way forwards from this pandemic together, and I think the opportunities are absolutely phenomenal. But the emphasis has got to be on economic recovery and constitutional change is not top of my agenda.”

Johnson was also asked about his refusal to support drug consumption rooms, after the more recent annual figures for drug deaths in Scotland which showed 5% increase on the fatalities registered in 2019, the seventh annual increase in a row.

Describing the deaths as “absolutely tragic”, Johnson said: “What we’ve got to do is make sure that we deal with the problem sensitively and humanely, try to help people off drugs to deal with their addictions.”

We also need to crack down on the county lines drugs gangs, but I think that [there are] legitimate questions to be asked about measures that might encourage more consumption of drugs, let me put it that way. That’s my anxiety about that particular solution. I’m not instinctively attracted to something that might lead to more consumption of drugs.”

Scotland’s newly appointed minister for drugs deaths, Angela Constance, said this week that she was considering pressing ahead with a pilot drug consumption room, regardless of whether Westminster devolved the necessary powers to the Scottish parliament.

The escalating public health crisis has been the subject of political deadlock between Westminster and Holyrood for several years, although many campaigners argue that the Scottish government’s focus should be on improving access to treatment, having previously cut funding for drugs services.