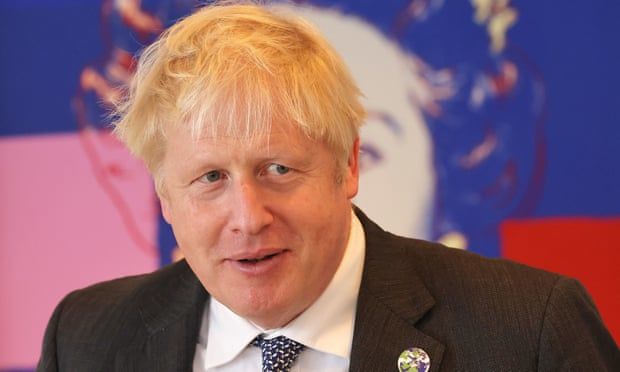 Johnson appeared blindsided by the lifting of the travel ban, having played down the prospects for a breakthrough en route to the US, telling reporters: “I wouldn’t hold your breath.”

Downing Street sought to claim credit for news that the UK is among the scores of countries whose citizens will now be able to travel to the US if they are double-vaccinated.

Johnson said bilateral “travel taskforce,” which has been meeting fortnightly since the summer, had been “hard at it”. But his spokesperson was unable to say how it had added any value, given that the new rules apply equally to many other countries.

The White House announced on Monday that the US would allow fully vaccinated passengers from the UK and most European Union (EU) countries to travel into the country from early November. The move signalled the end of a travel ban imposed by Donald Trump more than 18 months ago, in the early stages of the pandemic.

In addition to the UK and the 26 Schengen countries in Europe, the easing of restrictions will apply to Ireland, China, Iran, Brazil, South Africa and India.

It was welcomed by Johnson, who tweeted: “It’s a fantastic boost for business and trade, and great that family and friends on both sides of the pond can be reunited once again.”

No 10 is keen to showcase the warmth of relations between the prime minister and Biden, as well as the strong investment links between the two countries, when the pair meet in Washington on Tuesday. But Johnson, who had previously boasted of the prospects for a transatlantic trade deal, told journalists it now appeared unlikely to be imminent.

“The reality is that Joe has a lot of fish to fry. He’s got a huge infrastructure package, he’s got a build back better package. We want to do it, but what we want is a good free trade agreement. And I would much rather get a deal that really works for the UK than get a quick deal.”

With the travel ban no longer on the agenda, the two leaders are expected to discuss the situation in Afghanistan, the climate crisis, and the need to expand vaccination to developing countries.

Despite the chaotic withdrawal from Afghanistan in the summer, which saw the UK unsuccessfully implore Washington to delay its departure, Johnson insisted en route to the US that “our relations with the USA are about as good as they have been at any time in decades”.

Former US president Barack Obama sparked controversy during the Brexit referendum campaign in 2016 by claiming that leaving the EU would put the UK at “the back of the queue” in trade negotiations with the US.

Johnson, who was mayor of London at the time, while Biden was vice-president, hit back with a comment piece in which he attributed Obama’s hostility to the fact that he was “part Kenyan”.

Under current policy, only US citizens, their immediate families, green card holders and those with national interest exemptions (NIE) can travel into the US if they have been in the UK or EU in the previous two weeks.

The White House coronavirus response coordinator, Jeff Zients, said on Monday that international travellers would require proof of full vaccination before boarding a flight and a negative Covid-19 test within 72 hours before departure. They will not be required to quarantine upon arrival.

There will be some exceptions to the vaccine policy, including for children not yet eligible to be vaccinated. The new rules do not yet apply to travellers crossing land borders with Mexico and Canada.

“This new international travel system follows the science to keep Americans and international air travel safe,” Zients told reporters. “By requiring foreign nationals to be fully vaccinated in order to fly to the United States and in implementing additional strict safety protocols, we will protect Americans here at home and enhance the safety of international travel. This is based on individuals rather than a country-based approach.”
#Boris Johnson  #Donald Trump  #Afghanistan  #Coronavirus  #Joe Biden  #COVID-19  #Johnson  #vaccine  #Covid
Add Comment