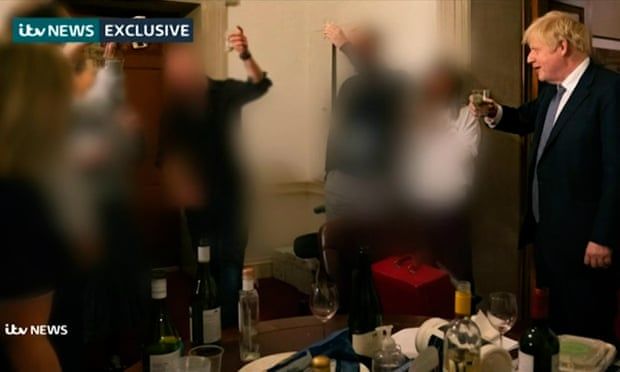 Boris Johnson is facing fresh claims of lying to MPs after photos emerged of him toasting a senior aide at a Downing Street leaving drinks event during a national Covid lockdown.

The Metropolitan police later fined staffers for attending the event on 13 November 2020 – but did not sanction Johnson, who is clearly seen raising a glass in a room full of alcohol.

The Guardian understands that the police had been handed details of the leaving drinks and Johnson’s attendance but chose not to issue him with a fixed-penalty notice (FPN), raising fresh questions about Scotland Yard’s Partygate inquiry.

Sources said that Johnson was the instigator of the event for Lee Cain, his director of communications, and was alleged to have poured the drinks for staff. 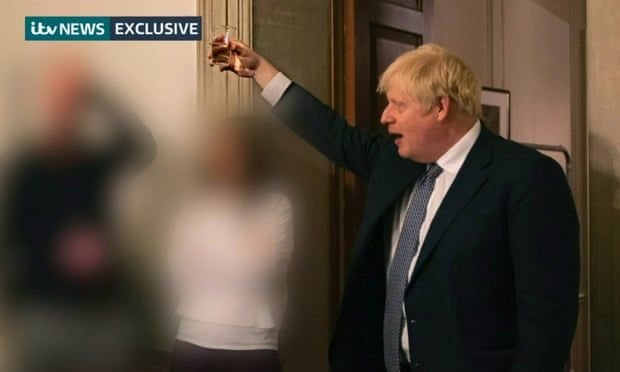 Johnson appeared to be giving a speech in the photos.

The leaving party came on a day of intense drama in Downing St – Dominic Cummings also quit that day – and those present recall it being an awkward occasion.

The new revelations came as No 10 was engulfed in a briefing war over the imminent publication of the inquiry by Sue Gray into the rule-breaking, which is set to be deeply critical of the prime minister and the cabinet secretary, Simon Case.

On Monday, Downing Street was forced to admit it had instigated a meeting between Gray and Johnson before the report’s publication – expected within days – having previously briefed ministers it had been at Gray’s request. During the meeting, Johnson apparently suggested to Gray that the report should no longer be published. He allegedly questioned whether there was “much point [publishing the report] now that it’s all out there”, according to a report in the Times.

Hours after No 10’s climbdown, the new pictures of an event in Downing Street were published by ITV News.

Johnson is seen raising a glass of wine in front of a table strewn with bottles of wine and spirits. At least nine people – including the photographer – appear to be in the same room. In another photo, Johnson gesticulates as he gives a speech, with his ministerial red box on the chair in front of him.

Others at the event to mark Cain’s departure were given fixed-penalty notices for their attendance.

At the time of the event in November 2020, England was in a four-week lockdown. Eight days earlier, Johnson had implored the nation to stay at home again as Covid infections rates soared.

Johnson has previously insisted repeatedly that “the guidelines were followed at all times” in Downing Street, before being forced to apologise for the first time in January after it emerged he had attended a “bring your own booze” event in the No 10 garden.

Johnson was asked in December last year by the MP Catherine West: “Can the prime minister tell the house whether there was a party in Downing Street on 13 November.” Johnson replied at the time: “Mr Speaker, no. But I’m sure that whatever happened, the guidance was followed and the rules were followed at all times.”

Johnson is facing an inquiry by the Commons privileges committee over whether he knowingly misled parliament, something that would be a breach of the ministerial code and theoretically compel him to resign.

The Conservative MP Sir Roger Gale said there was just “one answer” when a prime minister misleads parliament from the dispatch box. “It’s absolutely clear that there was a party, that he attended it, that he was raising a toast,” he told Times Radio. “And therefore, he misled us.”

Steve Baker, the Tory MP for Wycombe, was also critical of the developments – pointedly tweeting out a picture of an NHS public awareness poster about coronavirus, showing the face of a Covid victim using an oxygen mask above the words: “Tell her you never bend the rules”.

Not everyone was critical of Johnson, however. Peter Bone, the MP for Wellingborough, defended the prime minister last night, telling BBC’s Newsnight: “I think we can all agree it was a work event.”

Desmond Swayne, the New Forest West MP, told the same programme the event “wasn’t a crime”. He added: “It was a work do, that’s what people do at work. You have leaving dos.”

The disclosure puts the Met police under renewed scrutiny over their decision to only issue Johnson with a single fine, despite handing out FPNs to other staff at events the prime minister attended.

Last Thursday, the force announced it had concluded its inquiry. Asked about the new photo, a spokesperson for the Met said it had no further comment.

The Liberal Democrats immediately wrote to the Independent Office for Police Conduct (IOPC) on Monday night asking them to investigate the decision not to fine Johnson. MP Daisy Cooper asked the IOPC to open an investigation into the workings of the inquiry, saying that the “lack of transparency” was “likely to create considerable public confusion”.

Cain’s leaving drinks, along with a party in Johnson’s flat that allegedly occurred the same evening, were the two events that have drawn the most opprobrium from Whitehall sources about the Met’s decision not to fine Johnson. One said Johnson had “chucked them under a bus” by denying knowledge of the event.

A No 10 spokesperson suggested police had access to the photos. “The Cabinet Office and the Met police have had access to all information relevant to their investigations, including photographs,” they said. “The Met have concluded their investigation and Sue Gray will publish her report in the coming days, at which point the prime minister will address parliament in full.”

“Boris Johnson said repeatedly that he knew nothing about law-breaking – there’s no doubt now, he lied. Boris Johnson made the rules, and then broke them. The prime minister has demeaned his office. The British people deserve better.” 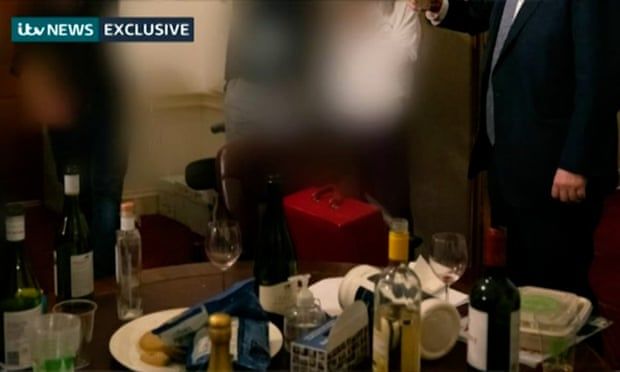 Multiple bottles of alcohol were seen on the table.

Cummings has provided written evidence to the inquiry by Gray.

“Any reasonable person looking at some of these photos will only be able to conclude that the PM obviously lied to the Commons, and possibly to the cops, and there is no reasonable story for how others were fined for event X but not him,” he wrote on his Substack blog.

Cummings said junior staff had taken the bulk of the blame for events that had been organised by their superiors. A number of staff have received multiple fixed-penalty notices for attending events.

He said there was also evidence of a separate birthday party in the flat in No 11 where Johnson and his wife, Carrie, live.

“There is a paper trail including WhatsApps from the flat. Sounds very bad for Boris/Carrie right? Surely that must be investigated? No! The police simply ignored it.”