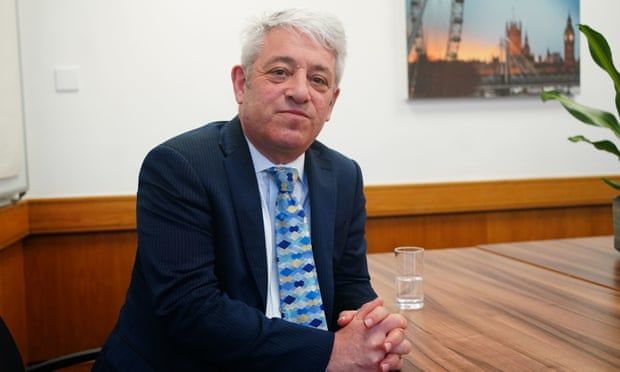 Complainant Lord Lisvane says refusal to accept verdict is ‘hysterical petulance from someone caught bang to rights’
Lord Lisvane, one of three complainants in the successful bullying claim against John Bercow, has said the former Speaker’s protests against the verdict have “not a shred of credibility”, as he praised the system that allowed a historical case to be brought.

Lisvane, a former clerk of the House of Commons, criticised Bercow’s “farcical” refusal to accept the verdict of the panel, calling it “hysterical petulance from someone caught bang to rights”.

He also backed the system that allowed historical complaints against Bercow to be investigated, exposing a pattern of serial bullying over a long period of time.

He said the process had been “forensically exacting” and the complainants came forward when they did because it was a “credible impartial process” that was extended in 2019 to cover historical complaints.

Parliament is moving to impose a one-year time limit on complaints against MPs and their staff under the Independent Complaints and Grievance Scheme (ICGS), which will come into force on 28 April.

Under the new rules, there could not have been an investigation into Bercow, who was found by the independent expert panel to have been a “serial bully” and to be a “serial liar” in his dealings with the investigation.

In an excoriating verdict on Bercow’s conduct during a decade as Speaker, the independent panel found his behaviour “fell very far below that which the public has a right to expect from any member of parliament”. It upheld 21 out of 35 complaints against him by former staff.

Lisvane, a crossbench peer, said he had experienced “an overwhelming sense of relief” after the verdict, because the inquiry took more than two years. Bercow was found to have repeatedly ranted at Lisvane, making “unfounded criticism”.

Bercow has said the process was unfair, describing it as “feeble conclusions reached [that] would be torn to shreds in any judicial process”. He told Channel 4: “I deny the allegations that have been levelled at me in the course of a protracted, unjust, and amateurish process. It’s been a kangaroo court and saying it’s a kangaroo court is extremely insulting to kangaroos.”

But Lisvane said Bercow’s protests against the verdict “had absolutely no foundation in truth”, in particular the idea that the complainants were standing in the way of reforms when he had personally “spent my entire career trying to make parliament better understood” and was supportive of diversity.

“When somebody is caught bang to rights, as has happened in this case, you get a lot of whining and whingeing about how it isn’t fair, they didn’t do it and it’s all a stitch-up and so on,” he said. “The fact is that the panel also regard him as a serial liar and somebody who attempted to defeat the complaints by false accusations of collusion and by advancing lies, quite simply deliberate lies, in a vain attempt to excuse the inexcusable. His shouting foul doesn’t carry a shred of credibility.”

Lisvane also highlighted the report’s statement that Bercow mimicked the complainants in an interview with the investigator. “It is extraordinary. He is a very good mimic. Once it may be funny, but if it is repeated with the aim of humiliation then it is not funny,” he added.

Two complainants whose complaints were upheld were the former staffers Angus Sinclair and Kate Emms.

Leakey, who made one of the complaints against Bercow and acted as a witness to others, said he had been determined to ensure Bercow’s record was examined fully.

Leakey said no public institution should give Bercow a position while he refused to show contrition for his behaviour.

Leakey’s own complaint against Bercow was not upheld, and he conceded there were no third-party witnesses, but he gave detailed witness testimony to the inquiry of the former Speaker’s bullying of other staff.

Bercow, who joined the Labour party after leaving parliament, was reported to be considering a run for London mayor after Sadiq Khan’s term is over. Labour has since suspended him from the party. He is a professor of politics at Royal Holloway, University of London, and until last year was the chancellor of the University of Essex. A spokesperson for Bercow said on Tuesday he had “never sought or wanted” to be London mayor.

The independent panel that examined the findings of parliament’s standards commissioner concluded that at least 21 complaints against him could be upheld. It banned him from holding a parliamentary pass and said he could have been expelled from the Commons if still an MP.
Add Comment