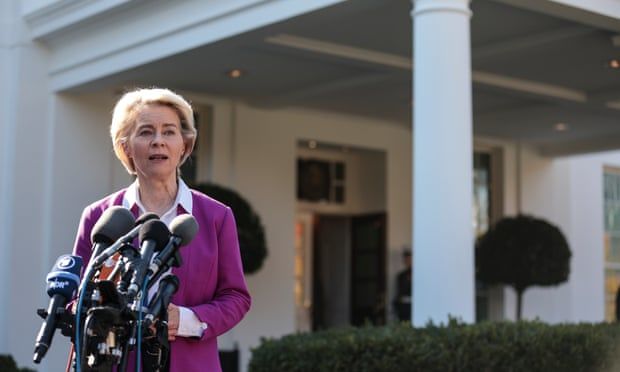 Ursula von der Leyen has claimed that the EU’s position on Northern Ireland has the support of the US president, as Brussels prepares a “ladder” of retaliatory options up to and including the suspension of the UK trade deal over Boris Johnson’s threats to ditch the current post-Brexit arrangements.

After a meeting at the White House, the European Commission president said Joe Biden was in agreement with the bloc that Johnson should not upend the tortuously negotiated Northern Ireland protocol.

Next week the commission is expected to present EU states with various retaliatory options if the UK government goes ahead with its threat to suspend parts of the arrangements designed to avoid a hard border on the island of Ireland.

Von der Leyen told reporters in Washington: “I think that President Biden and I will share the assessment that it is important for peace and stability on the island of Ireland to keep the withdrawal agreement and to stick to the protocol.

“This protocol has managed to square the difficult circle that Brexit caused. And now Northern Ireland has access to both markets that have access to the single market, the British single market as well as the European single market. Therefore, the situation is a positive one. And we want to do everything to cut red tape to be as flexible as possible within the protocol.”

The White House later issued a statement in which it said both leaders had during their talks “expressed their continued support for political and economic stability in Northern Ireland”.

EU diplomats were warned on Wednesday, during a downbeat assessment by the bloc’s Brexit commissioner, Maroš Šefčovič, that his British counterpart, David Frost, had been making unrealistic demands in the recent talks over the issue.

It is understood that Germany’s representative said in response that the EU must be ready to be hard-hitting should Downing Street ultimately decide to suspend parts of the agreed deal.

“The withdrawal agreement and the protocol were a prerequisite for the trade agreement,” Berlin’s ambassador said, according to one account. “It shouldn’t be forgotten when thinking about countermeasures.”

The withdrawal agreement keeps Northern Ireland in the single market and draws a customs border down the Irish Sea. But under article 16, parts of the agreement can be suspended as a “safeguard” in respond to a distortion of trade or the creation of societal difficulties.

The scope of the suspension must be “proportionate”, however, and the commission is expected to advise that Brussels must tailor its response should No 10 trigger the article. “The EU response must be well prepared, robust, proportional and legally sound,” a senior EU diplomat said. “Our response to the UK is also looked at by other trading partners.”

While suspension of the trade parts of the agreement is possible, the EU could also retaliate through targeted tariffs or even by ending arrangements that allow data flows between the bloc and the UK.

The advantage of giving a year’s notice of suspension of the trade deal would be to “open a new chapter” and force the UK to take the process seriously, according to one EU source, but diplomats added that there was no desire to “escalate” the issue.

Speaking in the House of Lords on Wednesday, Frost said he still believed the talks over Northern Ireland, now in their fourth week, could be successful and urged the EU to be calm.

“I gently suggest that our European friends stay calm and keep things in proportion,” he said. “They might remind themselves that no government and no country has a greater interest in stability and security in Northern Ireland and the Belfast Good Friday agreement than this government.”

Frost reiterated, however, that the UK was willing to trigger article 16 – and warned that Downing Street would not sit back and accept retaliatory measures from the EU.

He said: “At that point, of course, we would be entitled to come to our own judgments about how much value we could attach to their commitments supporting the peace process and the best interests of the people of Northern Ireland, as against protecting their own interests.”

Frost and Šefčovič are due to meet again on Friday. Frost told the Lords that if it became clear that no agreement could be reached, “the article 16 safeguards will be our only option”.

He added: “In my view, this process of negotiations has not reached its end. Although we have been talking for nearly four weeks, there remain possibilities that the talks have not yet seriously examined, including many approaches that have been suggested by the UK.

“So there is more to do, and I will certainly not give up on this process unless and until it is abundantly clear that nothing more can be done. We are certainly not at that point yet.”