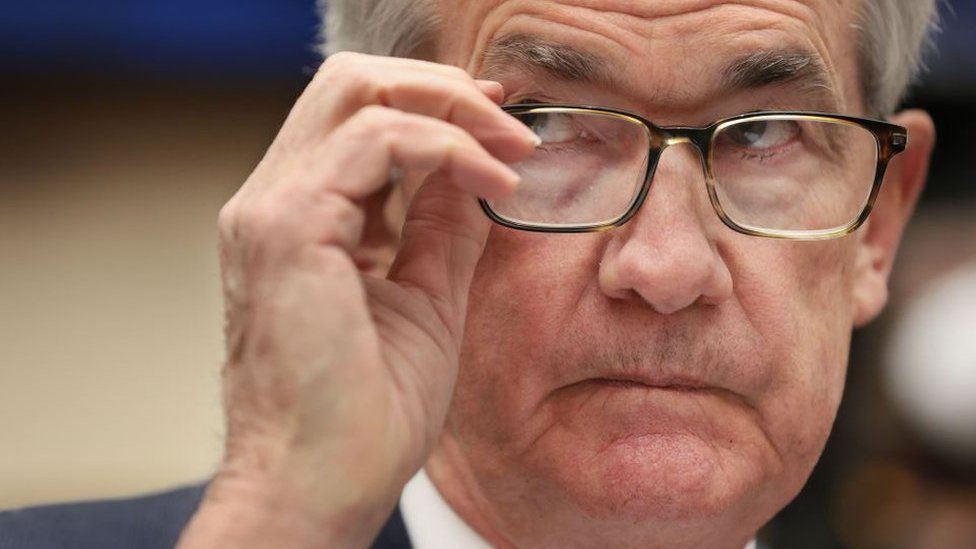 The US central bank's boss has indicated that he plans to press ahead with interest rate increases this month.

Speaking in front of Congress, Jerome Powell said he's in favour of a 0.25 point increase, aimed at tackling the surging cost of living.

The bank is under pressure to rein in inflation as prices in the US rise at the fastest rate in 40 years.

Analysts expect a rate hike in March, which would be the first since 2018.

It comes as costs for food, fuel and cars have risen sharply in recent months, leaving families' budgets strained.

Mr Powell admitted that he was open to further interest rate increases further down the line if inflation, which measures how quickly the cost of living rises over time, remains "persistently high."

The idea of raising interest rates is to keep those current and predicted price rises under control.

Higher interest rates make borrowing more expensive, for example. For households, that could mean higher mortgage costs, although - for the vast majority of homeowners - the impact is not immediate, and some will escape it entirely.

Many central banks, including the Federal Reserve in the US, aim to keep inflation contained at 2%.

Mr Powell acknowledged that price increases have jumped far above that target. In January, the increase in the cost of living jumped by 7.5% when compared with a year earlier.

"The inflation that we're experiencing is just nothing like anything we've experienced in decades," he said.

At the start of the pandemic, the Federal Reserve slashed rates to zero in a bid to stimulate spending and the economy at a time when many sectors were shut-down.

But a mix of issues, such as high demand as restrictions ease, labour shortages and supply chain problems have led to increases in the cost of goods in particular.

The chairman of America's central bank Jerome Powell has made it a point during his tenure of trying to demystify what the Federal Reserve does. He is committed to explaining what policymakers are doing and why because of what happened during the 2008 financial crisis.

Even by those standards, he was unusually blunt during his semi-annual Congressional testimony.

Mr Powell telegraphing explicitly what he wants to do at the central bank's next meeting in two weeks: proposing a quarter percentage point rate increase, while moving carefully and watching the economic implications of war in Ukraine.

Even before Russia's invasion, the Fed had a tough job on its hands trying to tame soaring inflation. A series of rate hikes were already expected this year.

But the conflict in Ukraine has complicated that job. The invasion is likely to undermine global growth while pushing up prices, especially for energy and food.

Given the uncertainty, Mr Powell is taking the view that a cautious approach is best and is putting all his cards on the table.

The chair recognised that "high inflation imposes significant hardship" on people and said the Bank will use all its tools to ensure the increased prices do not become "entrenched".

The Fed is not alone in its plans to raise interest rates from their current levels. The Bank of England raised interest rates twice in three months and drew outrage when its boss asked workers not to ask for a pay rise to try to stop prices rising out of control.

Looking ahead, Jerome Powell said that the Fed expects inflation "to decline over the course of the year as supply constraints ease... we are attentive to the risks of potential further upward pressure" on prices.

He cautioned, however, that the invasion of Ukraine, and sanctions imposed by Western countries, create a great deal of uncertainty around the prices of wheat, oil, and other goods.

"The near-term effects on the US economy of the invasion of Ukraine, the ongoing war, the sanctions, and of events to come, remain highly uncertain," he said in his semi-annual testimony to Congress.

"We will be monitoring the situation closely."

On Wednesday, oil prices surged again despite the US and other members of the International Energy Agency agreeing to release 60 million barrels of emergency stockpiles.

Russia is one of the world's largest oil and gas exporters, but US President Biden has not ruled out banning imports from the country.

Virgil 166 days ago
Oh ya has it straight up. The proverbial crap is about the hit the fan. Fed can't afford to raise rates and it can't afford not to. In business terminology, the USA is insolvent.

Oh ya 166 days ago
BS. unless he raises the rate over the 7.5% it will do nothing to stop inflation. Raising it 1/4 % is like peeing in the ocean, it is a joke the US government has to borrow money now to pay interest on its national debt so they can not afford a rate hike. Average Joe household is in debt more now than ever before and can not afford a rate hike. And everyone with 2 working brain cells knows you can not raise rates as your country is headed into a recession like the US is. So he might raise it .25% and then retract it and start QE again.
View all comments (2)Add comment