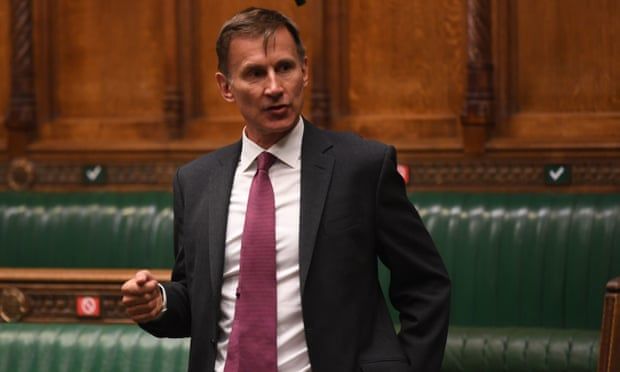 Former minister says Tory party is set to lose next election because of lack of integrity, competence and vision

Jeremy Hunt has urged Tory MPs to vote no confidence in Boris Johnson on Monday evening, saying the Conservative party is set to lose the next election because of a lack of integrity, competence and vision from the prime minister.

The former health secretary, who faced Johnson in the final two in the last leadership race in 2019, said he would be “voting for change”.

While Downing Street waited nervously for the vote, the prime minister suffered another reverse with the resignation of his anti-corruption tsar, and further public criticisms from MPs.

In a series of tweets that will be seen as firing the starting gun on another leadership pitch, Hunt said: “The Conservative party must now decide if it wishes to change its leader. Because of the situation in Ukraine this was not a debate I wanted to have now but under our rules we must do that.

“Having been trusted with power, Conservative MPs know in our hearts we are not giving the British people the leadership they deserve. We are not offering the integrity, competence and vision necessary to unleash the enormous potential of our country.

“And because we are no longer trusted by the electorate, who know this too, we are set to lose the next general election.

“Anyone who believes our country is stronger, fairer and more prosperous when led by Conservatives should reflect that the consequence of not changing will be to hand the country to others who do not share those values. Today’s decision is change or lose. I will be voting for change.”

John Penrose, the MP for Weston-super-Mare and the government’s anti-corruption tsar, announced he had quit and called on Johnson to stand down, too.

Penrose accused the prime minister of failing to address the “broader and very serious criticisms” contained in Sue Gray’s report last week into Downing Street parties. Given that demonstrating leadership was part of the ministerial code, he said, the only fair conclusion to draw from Gray’s report was “that you have breached a fundamental principle of the ministerial code – a clear resigning matter”.

Penrose said Johnson’s letter to his ethics adviser, Christopher Geidt, last week “ignored this absolutely central, non-negotiable issue completely”. He said nothing could justify a fundamental breach of the code and it was not “honourable or right … for you to remain as prime minister”, adding: “I hope you will now stand aside so we can look to the future and choose your successor.”

Angela Richardson, another Tory MP who quit as a ministerial aide in January, said she would be voting against Johnson in the confidence vote.

Before a meeting of the whole parliamentary party at 4pm where Johnson will make his last-ditch plea for MPs to back him, the prime minister wrote to them asking for support “because I know how much we can achieve together”.

He said “now is the time to concentrate every ounce” of energy and drive on “the priorities of the British people” and stressed his commitment to “Conservative principles”.

Johnson added: “I do not believe our voters will lightly forgive us if – just when they need us most to be focusing on them – we appear once again to be focusing on Westminster politics” because “the only beneficiaries will be our opponents”.

A vote of no confidence in Johnson’s leadership will be held between 6pm and 8pm on Monday, with the result expected to be declared shortly afterwards. The poll was triggered when 15% of Conservative MPs – 54 in total – submitted a leader calling for one.

To stay in office, Johnson needs to win the support of at least 50% of all Tory MPs plus one, totalling 180. If he does win he is theoretically safe from such a challenge for a year – although the rules can be changed.