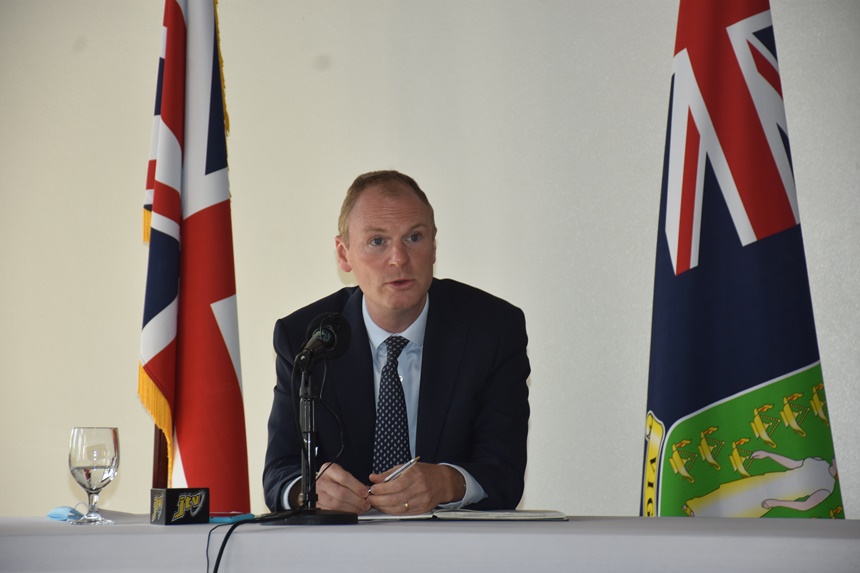 Former governor Augustus Jaspert has denied having a deliberately obstructive approach to signing requests for Crown lands to BVI Belongers during his tenure.

Before any piece of Crown land is issued, it must be approved by the sitting governor. But according to Natural Resources Minister Vincent Wheatley, Jaspert would delay the process for months.

“With that particular governor, Augustus Jaspert, he seems to have a real problem with locals owning Crown land,” Wheatley said in a recent appearance before the Commission of Inquiry (COI). “I had a lot of problems getting land signatures signed off on. It was always some other thing. He always wanted something else.”

“I look at these as deliberate attempts to stop or slow up the process,” Wheatley asserted.

But while appearing before the COI via video link, Jaspert told the Commission that he absolutely refutes the Land Minister’s contention.

Through a letter read out during the hearing, the COI heard that valuation reports formed the basis on which the cost of Crown lands are determined.

Jaspert in the December 2020 letter said valuations had not been provided in any files submitted to him and asked for an explanation for this.

He reiterated in the letter the importance and need for comprehensive guidelines that would support the process and provide an equitable system for decision-making.

“Contrary to that assertion [from Wheatley], actually, the action I took was very clear about the interest of the people of the territory — interest of Belongers — ensuring that they had fairness, transparency and clear guidelines to the operation of something that is so important. And I know they play such an important part in the culture of the British Virgin Islands to make sure that land was given out in a way that was fair to all Belongers,” Jaspert said.

I was exercising my constitutional duties

Jaspert told the commission that while it was not his responsibility to administer the lands, it was his right under the constitution to request information about guidelines on how they were distributed.

He said this was despite knowing there was no one-size-fits-all rule that applied to the distribution, given that different estates may have had different criteria on how land was distributed in the area.

According to the former governor, his actions were 100 percent in support of empowering people and making sure there was fairness, transparency and clear guidelines in the distribution of Crown lands.

The Governor, who served from 2017 before departing earlier this year, had a considerably testy relationship at times with current Premier Andrew Fahie.