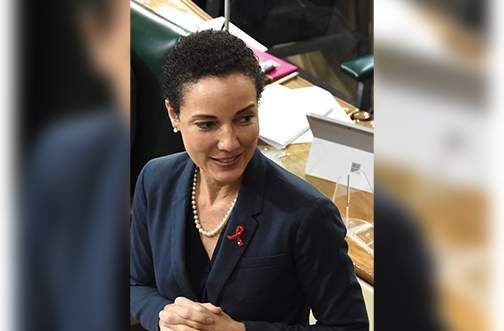 A diplomatic chess game, which started two years ago to oust Baroness Patricia Scotland as Commonwealth secretary-general, is now playing out in the Caribbean Community (Caricom) following Jamaica’s decision to nominate Minister of Foreign Affairs and Foreign Trade Kamina Johnson Smith for the post.
Scotland’s reign as secretary-general has been marred by allegations of corruption and cronyism at the London headquarters of the organisation, whose 54 nations have a combined population of 2.4 billion. She has denied the allegations.

Scotland has been the centre of controversy since it was reported in 2016 that she had spent thousands of pounds on the refurbishing of the London house that came with the job. She has, however, denied extravagant spending on the house.

In 2020 she was criticised by the Commonwealth’s Audit Committee for “circumventing” the tendering process after awarding a £250,000 consultancy contract to a friend. Britain, Australia and New Zealand have suspended their discretionary funding to the Commonwealth Secretariat until its financial systems are tightened up and tested by external auditors.

The withdrawal of funds saw the secretariat’s core budget dropping to £32 million from £52 million in 2012/13.

But those concerns appeared to have been ignored by Caricom leaders who — following the 33rd Intersessional Meeting of Heads of Government, held March 1-2, 2022, attended virtually by Jamaica’s Prime Minister Andrew Holness and in person by Johnson Smith — issued a communiqué which said, “Heads of Government expressed their overwhelming support for the re-election of Baroness Patricia Scotland as secretary-general of the Commonwealth”.

That came after a release from a special meeting of the Caricom Council for Foreign and Community Relations held October 16-17, 2021, and hosted by Jamaica’s consul general in Miami, Florida, which said, “The incumbent, Baroness Scotland, enjoys the broad support of the community,”

On Sunday, reports emerged that Caricom leaders are to meet this week to discuss the controversy, but up to press time there was no official word on the date for the meeting which is expected to be held virtually.

Scotland was elected to the post at the Commonwealth Heads of Government Meeting (CHOGM) in Malta in 2015. The next election is scheduled to take place during the June 20-25 Commonwealth summit in Kigali, Rwanda.

Scotland is the second secretary general from the Caribbean and the first woman to hold the post.

At the time of her election Scotland was mandated by Commonwealth leaders to review the operations of the secretariat. Three years later, she established a high-level group of mostly former Commonwealth foreign ministers, but according to a BBC story published in February 2020 the group’s report was never published.

The BBC also reported that a senior British diplomat wrote to Scotland on February 3, 2020 to say that continued UK funding would be suspended until the Commonwealth Secretariat complied with the recommendations of a KPMG report.

“These conditions included a register of occasions when procurement rules were waived, a register of real and potential conflicts of interest, and an updating of the body’s whistle blower policy,” the BBC report said.

However, the BBC reported a spokesman for the secretariat as saying that Scotland was making the organisation more “dynamic and integrated”.

Last Friday, following Jamaica’s announcement of Johnson Smith’s candidacy, prime minister of Antigua and Barbuda Gaston Browne described it as a “monumental error”, and said he was hoping that the matter will be resolved amicably.

“I know that there is a push now to have a meeting early this week and hopefully we can have a consensus and we can dissuade Jamaica from proceeding on this particular issue and for us to support Baroness Scotland.

“Baroness Scotland is a ‘Caribbeaner’ and as a member of the family I think we have a moral obligation to support her, to protect her and stand in solidarity with her, especially considering that there are entities and individuals outside of the region who are trying to emasculate her. We have to protect our own,” Browne said.
#Johnson
Add Comment