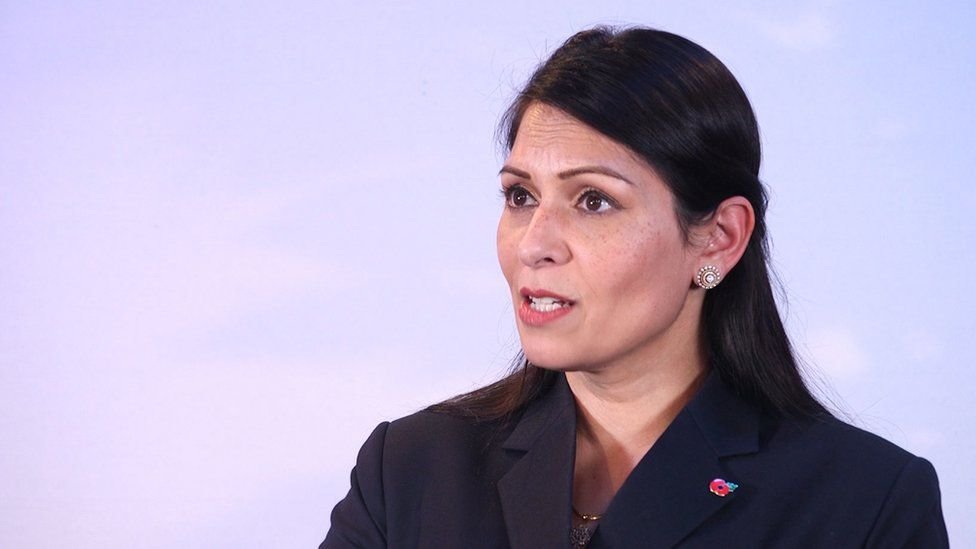 The plane containing 13 prisoners took off on Wednesday - 23 were left off it following legal challenges.

Campaigners said there was a risk people were being wrongly removed as had happened in the Windrush scandal.

The home secretary said their reference to Windrush was "deeply offensive".

She told the Daily Mail that it was "misjudged and upsetting" for "ill-informed Labour politicians and do-gooding celebrities" to invoke it in their campaign.

The Windrush scandal, which emerged in 2018, saw people who came to the UK from Commonwealth countries wrongly told they were in the country illegally.

It was cited in an open letter last month, signed by 90 public figures, including model Naomi Campbell and actress Thandie Newton.

Warning that issues linked to Windrush have "not been resolved," they argued the planned deportation flight brought "credible risks of unlawful and wrongful deportations" and urged airlines to boycott it.

The campaigners warned the UK "frequently" seeks to deport people whose crimes are linked to forced labour, and processes for identifying victims of trafficking were in "disarray".

A separate letter last month signed by over 60 mostly Labour MPs and peers also called for the flight to be cancelled.

The MPs said some children would "forced apart" from their parents and the flight posed a Covid-19 risk, adding that the government had "so far failed to learn any lessons" from a March review into the Windrush scandal.

But during a Commons debate on Monday, Immigration Minister Chris Philp told MPs the flight was about "criminality, not nationality," and had "nothing to do" with the Windrush scandal.

He added that "not a single individual on the flight" had been found eligible for the government scheme set up to compensate victims of the scandal in March.

Downing Street said all of the people on the flight were "dangerous foreign criminals", who had been born in Jamaica, adding: "Each week we remove foreign criminals - this is no different."

The home secretary is required by law to deport any foreign national who has received a prison sentence in the UK of more than a year, unless a specified exception applies.

It is reported that among those offenders originally due to be sent to Jamaica last Wednesday were the victims of modern slavery.

Others are said to have young children in the UK.

Frustration at human rights campaigners going to court to prevent the deportations is evident in Ms Patel's depiction of them as "do-gooding" celebrities.

But the government accepts it can only deport those convicted felons who do not need this country's protection and have no legal basis for remaining here, conditions which open the door to legitimate legal challenge.

There is also Home Office anger at suggestions that the deportation flights are akin to the Windrush scandal, with officials noting that all those due to be aboard Wednesday's flight had had their case checked by the Home Office's Windrush Taskforce.

In her interview with the Mail, Ms Patel said the Windrush generation had "made an enormous contribution to our country and were wronged by successive governments".

"To see ill-informed Labour politicians and do-gooding celebrities attempting to conflate the victims of Windrush with these vile criminals set for deportation is not only misjudged and upsetting but deeply offensive," she added.

After the flight took off on Wednesday, Mr Philp said it was "disappointing that immigration law firms continued to use last-minute tactics to remove a significant number of offenders".

"These individuals had every opportunity to raise the claims in the days and weeks leading up to the flight," he said.

"However a significant number of claims were not submitted until hours before the flight was due to leave - meaning some murderers and rapists were able to stay in the UK".

He said the Home Office would work through the cases of those taken off the flight as quickly as possible.

After the publication of her Mail interview on Friday, the Bar Council, which represents barristers in England and Wales, said: "Targeted attacks on individual lawyers who are simply doing their jobs applying the law of the land is completely wrong and dangerous."

"We and the Law Society have recently been in contact with the Home Office again about our concerns."

Glenda Caesar, a Windrush victim who lost her job as a GP administrator as she didn't have the paperwork to prove she could legally work in the UK, criticised Ms Patel's comments.

Ms Caesar, who arrived in the UK from Dominica legally in 1961 when she was a child, told the PA news agency: "She hasn't taken the time to meet with us or speak with us.

"How can she know what's deeply offensive for us?"

While stating that she did not condone crime, she said if the prisoners being deported had spent their childhoods in the UK then she could understand how they would feel about being taken to a country "they don't even know".

How many people are deported each year?

The majority of this group leave the country voluntarily (once caught for breaking an immigration offence, for example), but around 7,200 are forcibly removed.

These numbers have declined in recent years, with last year seeing the lowest number of removals in at least 15 years.

The numbers so far for this year suggest it has dipped further, which could be due to the impact of coronavirus.

Last year, the largest nationality groups to be forcibly returned were Romanian, Albanian, Brazilian, Polish and Lithuanian - representing half the total. Jamaicans represented 48 of the total.

We know that of all of the people returned from the UK, around 5,100 were foreign national offenders.