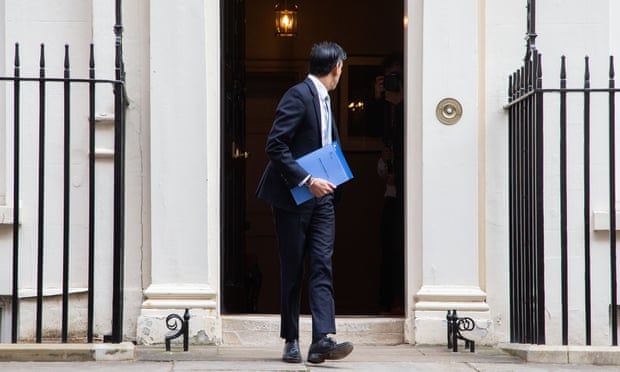 ‘It’s the inauthenticity’: has Rishi Sunak blown his No 10 chance?

Once the frontrunner for next Tory leader, Sunak has been written off by some as politically naive

There has been an uneasy consensus among Conservative MPs that the Russian invasion of Ukraine has meant Boris Johnson is saved from a leadership challenge.

But there is also a whispered agreement that there is another factor keeping Johnson in No 10 – the fast disintegration of Rishi Sunak’s reputation as a viable alternative.

Tory MPs who spoke to the Guardian said they believed his chances of becoming prime minister were now minimal.

“His stock has fallen considerably. I don’t think that he is a contender now. I’m not sure he ever really was,” one key Johnson critic said.

Some Tories are prepared to robustly defend the chancellor over the revelations that his wife, Akshata Murty, has non-domiciled tax status, which makes it unclear what tax – if any – she has paid on £11.5m in annual dividends from a stake in her family’s IT business empire, Infosys.

One said it was “deeply pathetic” to go after family members. The business secretary, Kwasi Kwarteng, and Johnson himself defended Murty, who on Friday night announced she would now pay UK taxes, on the airwaves.

However, the chancellor’s relationship with No 10 is fractured, despite Johnson being more supportive in public over the tax furore than Sunak was over the prime minister’s Partygate scandal.

And those tensions erupted on Thursday night as an ally of Sunak accused those around Johnson of being responsible for the leak of Murty’s tax status – something No 10 and No 11 deny on the record.

Privately, MPs concede that the revelations could be damaging. But they also point to instances such as Sunak’s photo opportunity with a Kia Rio, his quip that his household “all have different breads” and his £100,000 donation to Winchester college as more cringeworthy.

Sunak, with his slick PR operation, was the consensus choice when Partygate put Johnson’s future in the balance, though even then many MPs remained unable to say exactly who were the core Sunak squad among the parliamentary party.

YouGov polling shows the chancellor’s popularity has fallen by 24 points since the spring statement. Now he is less popular than Johnson and Keir Starmer..

Labour, which saw the chancellor’s popularity as a threat to its hopes of getting ahead in polls on economic competence, has expended huge effort to try to taint him. Starmer has used tax increases multiple times, even during Partygate, as his attack lines of choice at prime minister’s questions.

Since the spring statement, Labour has redoubled its efforts with a series of stunts, including hand-delivering mock letters about tax increases to political journalists with “signed by Rishi” branding that has been on the chancellor’s own publicity. Activists posed with Sunak masks outside the Treasury holding tax bills getting gradually larger.

Sunak has plummeted in the closely watched ConservativeHome polls of cabinet ministers. The poll had been in part responsible for Liz Truss’s growing reputation as the members’ darling, as she routinely topped it, though more rigorous polling of members revealed in February that Sunak would have beaten her comfortably. Now it is the defence secretary, Ben Wallace, riding high.

Conservative MPs point to Sunak’s growing reputation as a tax raiser because of a failure to cancel this week’s national insurance hike, despite the promise of a future income tax cut.

“The world changed radically from the time when it was announced – rising prices, Ukraine, the pressures people are under are just so awful at the moment,” one former minister said. “He can’t control global fuel prices but he can control the tax system.”

The second issue is a failure of the spring statement to deliver more help with the cost of living. Sunak has been blamed across Whitehall for blocking a multitude of measures to ease the crisis.

Whitehall sources confirmed Sunak had taken his red marker to a number of spending plans in the long-delayed energy security strategy released on Thursday. He is said to have vetoed proposals to increase the energy rebate, which officials had proposed raising to at least £500, either for all households or for the poorest homes.

Sunak also rejected an earlier offer in the strategy to expand funding for energy efficiency measures in people’s homes.

According to the Telegraph, the Treasury said it would not fund the extra £200m to expand the scheme, which uses money raised from green levies to pay for improvements such as insulation for the worse-off.

MPs, even those from the David Cameron era of austerity, said they did not believe having such tight pursestrings was a viable political position.

“Look, my politics are basically Rishi’s – small state. I do think it’s right we make the point that government cannot shield people from everything,” one frontbencher said. “But I accept that is not where the public is now. I’m not sure we’re really in a position to say no compromise with the electorate.”

The third issue raised by most MPs, potentially most damaging, is an emerging sense Sunak has been politically naive in making what appeared to be an obvious play for the leadership and in a catalogue of missteps about his family’s wealth.

In focus groups run by Labour, sources say it is striking how quickly the chancellor has become a subject of ridicule, having previously been widely praised. Most likely to prompt laughter is the picture of Sunak filling up someone else’s car in Sainsbury’s on the day he cut fuel duty.

“It’s not that people don’t like him because he’s rich, that’s not the issue, it’s the inauthenticity,” one insider said.

“The truth of the matter is that he’s been getting overexcited,” one former cabinet minister said. “Every week he was sending out the email equivalent of a glossy newsletter with his Rishi signature on it. It’s trying too hard.

“When Boris was at his lowest ebb, Rishi emailed all MPs to say ‘come and meet me and tell me your ideas’, with invites for that very night and the next day, and that’s just unheard of – it looks so opportunistic. And it looks naive, I think that is actually what it is.”

One backbencher said they feared the party would not benefit even from more popular measures such as the fuel duty cut or the income tax cut announced in the spring statement for 2024.

“Of course, that’s politically naive as well. It just underlines the inexperience because people will have discounted it by the time it comes in – they’ll think: so what?” the MP said. “What people are actually going to think when they hear that is ‘I don’t need a tax cut in two years’ time. I need it today.’”

Not everyone is ready to write off the chancellor. “I’ve been around a long time and I think we do this too quickly,” one frontbencher said. “His public reputation was never going to last because as a chancellor you have to make very hard choices. It’s actually not your job to be popular.”