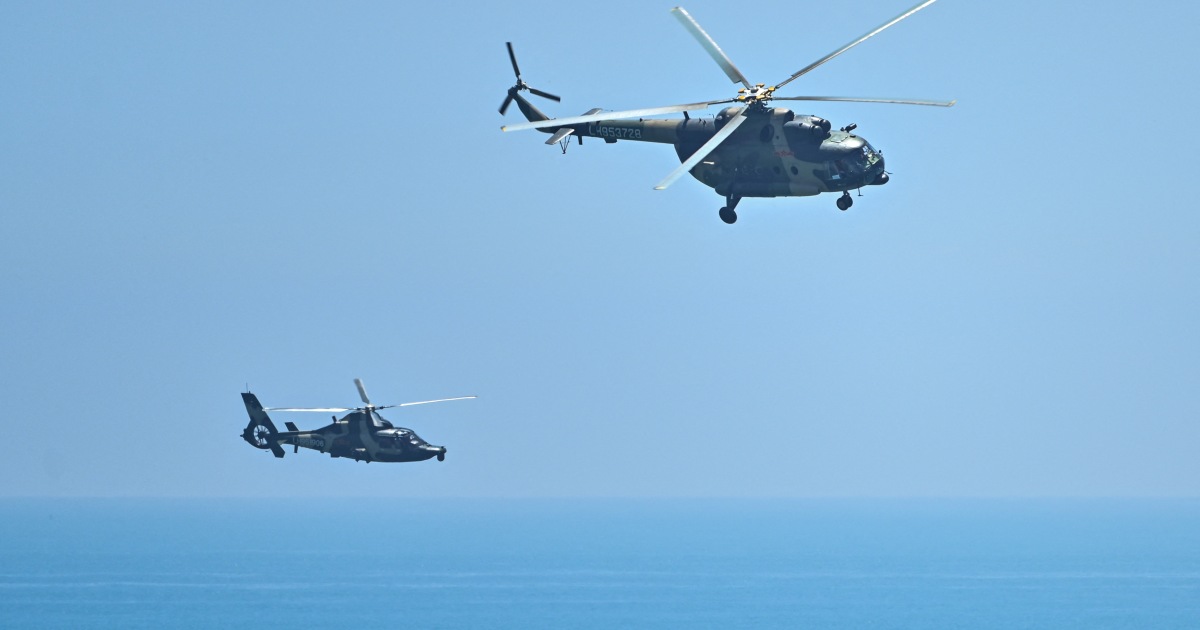 Tensions are rising in the Taiwan Strait after China launched its biggest-ever military drills following US House Speaker Nancy Pelosi’s visit to Taipei.

China has launched its biggest-ever military drills around Taiwan, firing ballistic missiles and deploying dozens of fighter jets and warships, in response to a visit to the self-ruled island by US House Speaker Nancy Pelosi.

Beijing called Pelosi’s trip to Taiwan, which it views as Chinese territory, a “dangerous, reckless and irresponsible provocation” by the United States against China. It said the ongoing military drills, which began on Thursday and will last until Sunday, are aimed at demonstrating its resolve to uphold its “sovereignty and territorial integrity”.

The exercises have ratcheted up tensions in the region, with Japan saying several missiles fired by Chinese forces landed in its exclusive economic zone (EEZ), while the Association of Southeast Asian Nations (ASEAN) warned the situation risked “miscalculation, serious confrontation, open conflicts and unpredictable consequences among major powers”.

Taiwan’s President Tsai Ing-wen, meanwhile, issued a statement late on Thursday calling on the international community to help end China’s “unilateral and irrational military actions”. She also said Taiwan would not provoke conflicts, but would firmly defend its sovereignty and national security. 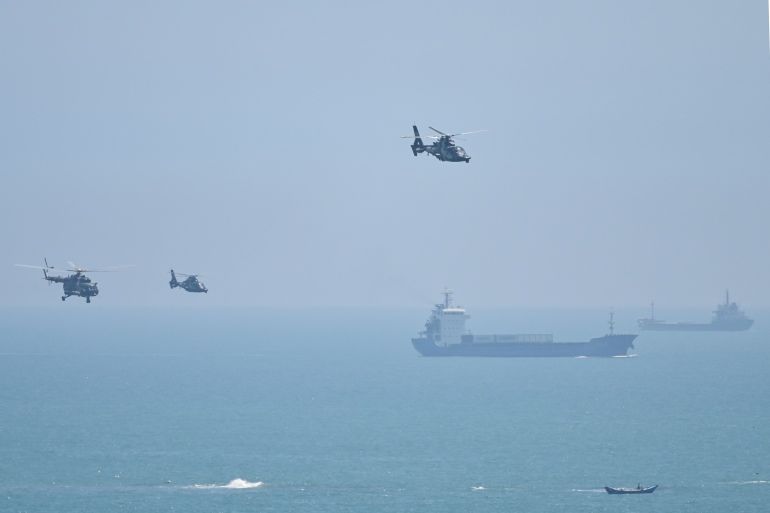 As frictions escalate, here are answers to three key questions:

How worrying are China’s military drills?

Chinese state media say the live-fire sea and air exercises are taking place in six zones around Taiwan, which lies 180km (112 miles) off China’s coast. They involve more than 100 planes, including fighter jets and bombers and 10 warships, according to CCTV.

Taiwan has condemned the exercises, saying some infringe on Taiwan’s territorial waters and amount to a sea and air blockade of the island.

On the first day of the drills, Chinese rocket forces fired several ballistic missiles into the waters around Taiwan, a first since 1996. Taiwan’s defence ministry said 11 missiles had been fired and identified them as Dongfeng ballistic weapons.

Japan said at least five missiles landed in its EEZ, a zone that stretches 200 nautical miles (370km or 230 miles) from the outer limits of its territorial seas, and has lodged strong diplomatic protests over the move.

Authorities in Taiwan also urged ships and planes travelling in the area to find alternative routes, and on Thursday cancelled dozens of flights at the Taoyuan Airport in the capital, Taipei. South Korea’s Korean Air and Asiana Airlines also suspended services to Taiwan for one or two days because of the exercises, according to local media. 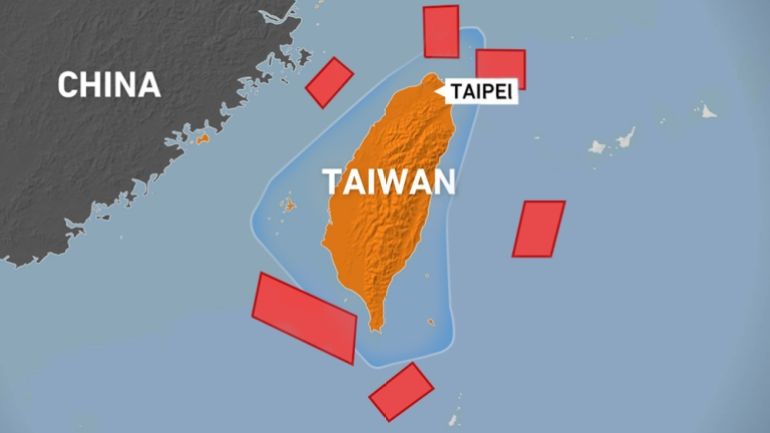 Could China invade Taiwan? And how difficult would that be?

China’s unprecedented drills have revived questions about whether Beijing intends to launch an invasion of Taiwan, especially with the state-run tabloid Global Times running commentary from experts describing the exercises as a rehearsal for “reunification”.

“In the event of a future military conflict, it is likely that the operational plans currently being rehearsed will be directly translated into combat operations,” it quoted Chinese mainland military analyst Song Zhongping as saying.

Despite the rhetoric, most experts say neither China nor the US wants a war in Taiwan – at least not in the near term.

“China is seeking to warn the US and Taiwan against taking additional measures that challenge Chinese redlines,” said Bonnie Glaser, director of the Asia Program at the German Marshall Fund of the US.

“They are demonstrating their military capabilities to impose a blockade on Taiwan. But [President] Xi Jinping does not want a war with the United States. He has not made a decision to invade Taiwan,” she told Al Jazeera.

But even if China – which has the world’s largest fighting force and has rapidly modernised its military – wanted to take Taiwan by force, such a move carries significant risks.

Its forces would have to cross the Taiwan Strait with more than 100,000 soldiers, according to observers, during which they would face aerial and naval bombardment. If the soldiers did manage to make it to Taiwan’s shores, they would find it difficult to make a landing as its rugged coastline offers few suitable beaches for unloading armoured personnel, carriers, tanks and artillery.

There is also the risk an invasion could provoke a larger conflict between China and the US.

Although the US does not officially recognise Taiwan as a separate state, under the Taiwan Relations Act of 1979, it is obliged to help the island defend itself. In May, US President Joe Biden suggested Washington would defend Taiwan with force in the event of a Chinese incursion.

While Biden has couched US support for Taiwan in the language of values – defence of democracy against autocracy – many experts note the island is also strategically important to Washington.

“This is because it is part of the first island chain of defence against aggression by the People’s Liberation Army,” said June Teufel Dreyer, professor of political science at the University of Miami.

“Chinese military strategists have referred to Taiwan as the buckle in the chain that keeps the PLA bottled up behind the first island chain, and taking over Taiwan would mean getting access to a very important port, Kaohsiung, and an entryway to the Blue Pacific and Guam, which is a US territory and is half-way to Hawaii,” she told Al Jazeera.

What is China’s problem with Pelosi’s visit?

Although the People’s Republic of China (PRC), as the government in Beijing is formally known, has never ruled Taiwan, it considers the island of 23 million people part of its own territory.

The Chinese government categorically objects to all official contacts between Taipei and Washington, and has characterised the visit by Pelosi, a longtime China hawk, as a provocation and a violation of its sovereignty.

Her visit also comes at a sensitive time, just weeks before Communist Party leaders are set to meet for the 20th Congress, with President Xi Jinping believed to be setting the groundwork to secure a norm-busting third term. Xi, in a recent phone call with Biden, warned the US leader against “playing with fire over Taiwan” and stressed he firmly opposed Taiwanese independence and interference by external forces.

Analysts say the trip is likely to further damage already strained relations between Beijing and Washington and increase cross-Strait tensions.

“This was a really bad move on the part of Pelosi, because she came at a time when bilateral relations between US and China are at the lowest point. And [at a time when] the world is facing a pandemic, the Ukraine crisis and an energy crisis, among many others,” said Henry Huiyao Wang, president of the Center for China and Globalization in Beijing.

“This damages not only the US-China relations, but brings a serious crisis to cross-strait relations,” he told Al Jazeera. “I think there is going to be a lot of consequences in the future.”