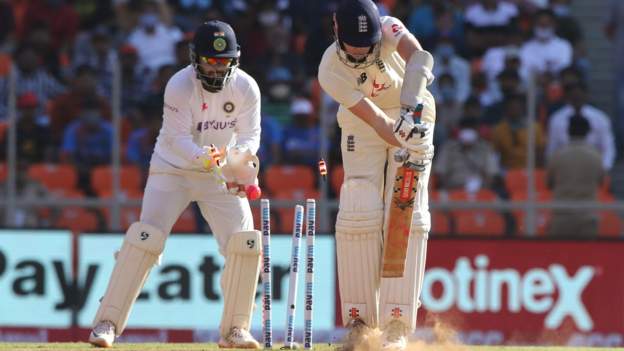 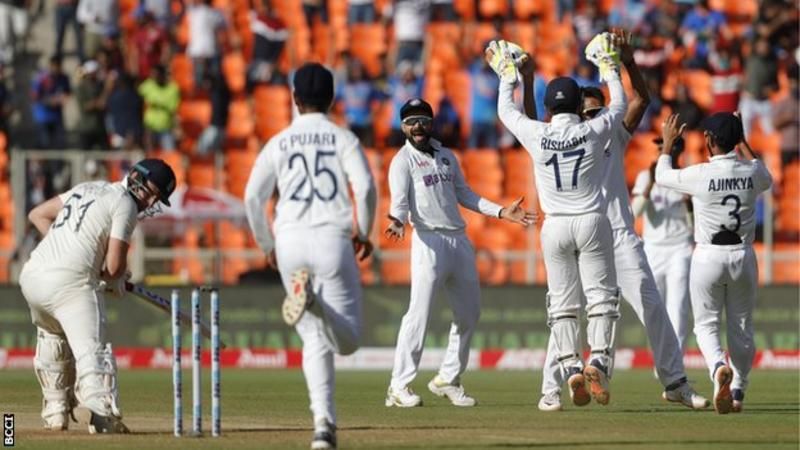 On a scarcely believable day when both sides collapsed and 17 wickets fell in two sessions, India completed the quickest Test win since 1935 not long into the final session.

England began the day with a thrilling fightback, turning India's overnight 99-3 into 145 all out.

But, faced with a first-innings deficit of 33, England were bowled out for 81 as India's spinners ran riot once again.

In a frenzied start to their second innings, England lost Zak Crawley and Jonny Bairstow within three balls - both bowled by Axar Patel.

Spinners were responsible for every wicket to fall on the day - and 28 of the 30 in the match - Joe Root taking 5-8 in the first session, Axar 5-32 and Ravichandran Ashwin 4-48, including his 400th Test scalp.

India cruised to their target of 49 inside eight overs, an incredible game wrapped up before the floodlit conditions of a day-night Test could have an impact.

Victory gave India, who lost the first Test, an unassailable 2-1 lead in the series with one match to play and ended England's hopes of qualifying for the World Test Championship final this summer.

England blown away on wild day

If the first day of this Test was remarkable - England bowled out for 112 despite winning the toss - the second was one of the most incredible in recent memory.

Neither side got to grips with a turning pitch, at least not until India's chase when England were demoralised after their second collapse of the game.

The 17 wickets fell in 53 overs for the loss of 127 runs, the match over with almost 30 overs remaining on the second day. 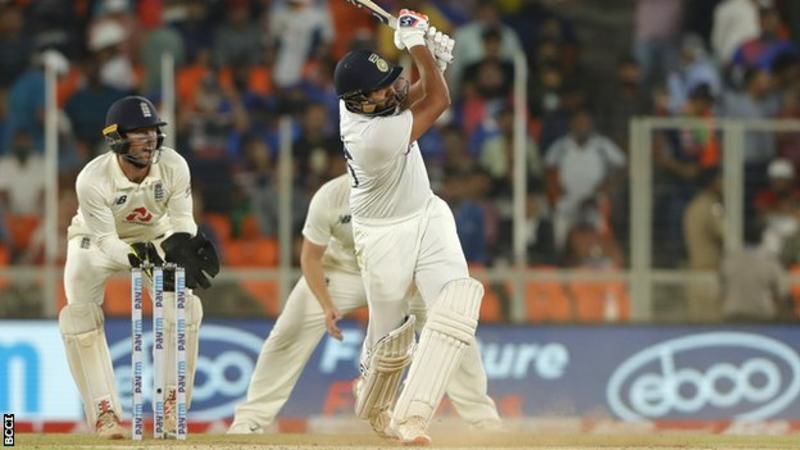 Although England's fightback brought them back into the contest, the skill and relentless accuracy of Axar and Ashwin proved too much for a side that also collapsed twice in the second-Test defeat.

Had England mustered another 100 runs India would have had a difficult chase.

Instead, under little pressure, Shubman Gill and Rohit Sharma cantered to victory in one-day mode to the delight of the crowd in the world's largest cricket stadium.

*  England lasted 476 balls across two innings - the fifth fewest in their Test history.


*  It is the eighth two-day Test since World War Two and England's first defeat inside two days since 1921.

Having wasted winning the toss on day one, England's fightback with the ball gave them a route back into the contest.

Jack Leach, who removed India captain Virat Kohli in the final over on Wednesday, struck twice early on day two, bowling Ajinkya Rahane as he tried to cut trapping a sweeping Rohit Sharma lbw for 66.

Root then ran through the lower middle order.

Rishabh Pant was caught behind off Root's first ball before Washington Sundar and Axar fell in the space of three balls to give the England captain figures of 3-0.

While it was Root's first five-wicket haul in Tests, it only added the questions over England's choice to pick one frontline spinner in Leach - a view compounded when Root opened the bowling in the fourth innings.

India collapsed from 114-3 to 145 as Leach finished with 4-48, but an impressive bowling performance was soon to be wasted by England's batsmen.

England's first showing with the bat put them in a difficult position. The second was feeble and confirmed their fate.

Having seen Crawley bowled first ball, Bairstow attempted to sweep his first delivery and was given out lbw. Although he overturned the decision on review, he was bowled next ball to complete a pair on his return to the side.

After Dom Sibley was caught behind attempting a leg-side heave at Axar, Root and Stokes batted positively in exceptionally difficult conditions but a wicket never felt far away.

Root had already survived a tight review when he was leg before for 19 pushing forward to Axar, and Stokes fell in similar fashion to Ashwin for 25.

Ashwin has now dismissed Stokes 11 times in Tests and, once he fell, the result seemed inevitable.

Ashwin tormented Ollie Pope before bowling him for 12, then had Jofra Archer lbw as he swiped across the line to give him his 400th Test wicket. Playing his 77nd Test, Ashwin is the second quickest bowler to reach the landmark, after Sri Lanka legend Muttiah Muralitharan's 72.

A series that started so strongly with the bat - England scored 578 in the first innings of the first Test - is teetering on the brink of disarray.

Defeat does not 'define' England - what they said

England captain Joe Root: "We're bitterly disappointed. We don't define ourselves on a performance like that. It was a very challenging surface.

"We missed an opportunity, more in the first innings than anything. If we'd got 200, that would have been a very good score on that wicket and the game would have looked completely different."

India captain Virat Kohli: "The result went our way but the quality of batting wasn't at all up to standard by both teams. We were 100-3 and hoping to get more than we needed. There was a lack of application from both sides."

India spinner Ravichandran Ashwin: "It felt amazing when the board was flashing 400 wickets and the crowd were clapping for me.

"When we collapsed I thought the game could be in the balance, but Axar Patel pulled it back for us and it was a good performance in the third innings."

England bowler Steven Finn: "England are going to have to look at their team selection. I'll be amazed if we don't see a different balance for the last Test.

"But the most important thing is doing your best to draw a line under this game now. They still have an opportunity to draw the series and it is only two Test matches ago that they produced one of the most complete performances by an England team in the sub-continent for a long time."