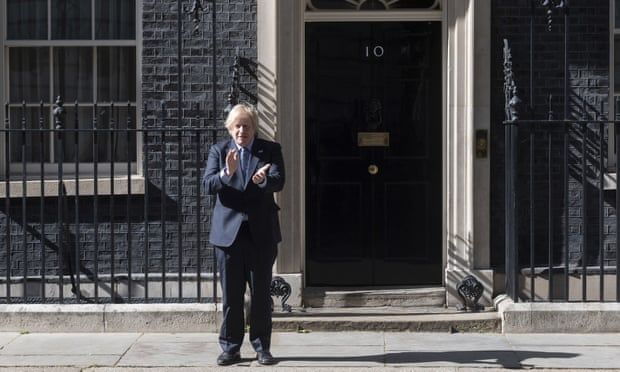 If Johnson didn’t believe the ‘NHS overwhelmed stuff’, why was he clapping? | Rachel Clarke

In public he called doctors and nurses heroes. Now we know what he really thought: that we were crying wolf over Covid
Last October, in their first joint television appearance, Boris Johnson and his then fiancee, Carrie Symonds, showered praise on frontline NHS workers for their “courage and dedication” during the pandemic.

“Thank you – to each and every one of you – for your care, your compassion and your kindness,” the prime minister gushed. “You are the beating heart of our nation. You truly are the pride of Britain.”

Isn’t that lovely? Especially after the claps, the hero-worship and the illumination of Downing Street in NHS blue – not to mention the roughly one-millionth of a George Cross every NHS staff member would later discover we had earned.

Alas, it turns out that at almost exactly the same time Johnson was privately telling his aides: “I no longer buy all this NHS overwhelmed stuff.” Oof. Thanks to Dominic Cummings’ decision to share his WhatsApps this week, we’ve discovered just what the prime minister really thinks of NHS doctors and nurses. We are, apparently, the irksome kind of hero who cries wolf, moaning and groaning tediously about the pressures that Covid put on our working lives.

If only the prime minister’s fake piety were remotely surprising. I cannot help but remember the words of one of the great global statesmen whom Johnson no doubt aspires to be. In a Thanksgiving proclamation just days before his assassination, John F Kennedy told the United States: “As we express our gratitude, we must never forget that the highest appreciation is not to utter words, but to live by them.”

There is also a wildly inappropriate flippancy revealed in the Johnson messages, in addition to the two-faced insincerity. Who in their right mind makes mid-pandemic jokes about the average age of the thousands of elderly victims of Covid, meaning that the virus – ha! – increases life expectancy? “Get Covid and live longer,” he chortled. The UK death toll had reached about 45,000 that month.

But the most depressing aspect of the messages is the way they depict a world leader who is entirely – and lethally – detached from reality. The “NHS overwhelmed stuff” that Johnson chose not to “buy” was so stark, so ominous in its implications last October that many of us in the NHS were already tossing and turning at night, haunted by the dread of having to do it all over again each day. We could see – on the overcrowded wards, in the A&E waiting times, in the growing pressures on intensive care units – another wave of carnage inexorably heading towards us.

And the numbers bore out our fears: 300 deaths a day by the end of October, then 600 by late November, then nearly 1,000 by late December. Sickening, vertiginous, dumbfounding numbers. By the first week of January I was having panic attacks.

Johnson knew all this. In fact, incredibly, on 12 October – three days before he sent his WhatsApp to Cummings – the prime minister stood up in the Commons and warned the nation: “The number of cases has gone up four times in four weeks, and it is once again spreading among elderly people and [those] vulnerable … deaths, alas, are also rising once again. These figures are flashing at us like dashboard warnings in a passenger jet. And we must act now.”

The disconnect between these public words and Johnson’s private dismissal of the NHS “stuff” is incredibly hard, as a doctor, to stomach. For it turns out the prime minister wasn’t ignorant of what was unfolding in our hospitals. He just chose to ignore it, like a child closing their eyes and thinking their mummy can’t see them.

But Johnson lacks the excuse of being a toddler. The cost of his wishful thinking was paid by many of the 100,000 men, women and children who would die from Covid in Britain from November onwards.

By January, we found ourselves treating one, two, sometimes even three generations of the same family in hospital, each having caught Covid from the other at Christmas. Several young pregnant women with Covid in ICU had to have their babies removed from their bellies by caesarean section as they lay marooned between life and death on a ventilator. There weren’t enough ambulances to bring the critically ill to hospital: people suffocated to death from Covid at home before the paramedics could get there.

They died on the wards; they died in the hospital corridors. Care was rationed. The NHS was overwhelmed. People were sometimes denied what they needed – despite our very best efforts. We wanted so badly to protect everyone, but we couldn’t. I’m so sorry. We tried and tried, but we failed.

And so here we are again, in week one of Boris Johnson’s latest experiment in closing his eyes to the facts that don’t suit him. Post “freedom day”, there are no longer any meaningful government efforts at containing Covid, although I gather we may see some introduced in nightclubs in September. Numbers of Covid admissions are doubling every two weeks again, and hospitals are already being forced to cancel life-saving cancer operations and transplants. Meanwhile, Johnson keeps his eyes screwed shut as he tries to banish the virus to by sheer force of will and ego alone.

“People die all the time,” wrote the renowned Japanese writer Haruki Murakami. “Life is a lot more fragile than we think. So you should treat others in a way that leaves no regrets. Fairly, and if possible, sincerely. It’s too easy not to make the effort, then weep and wring your hands after the person dies.”

Sincerity. Is it too much, in a global pandemic, to ask for? I am horribly fearful of another wave of retrospective handwringing from the steps of Downing Street. We’ve been here too many times before. I don’t know any longer if I’m wolf, canary, hero, scaremonger, workhorse, cynic or fool. I just know that I don’t want to witness any more death by appointment, by political decree. It’s not the dying, – it’s the lying that kills me.
#Boris Johnson  #Johnson  #Covid
Add Comment