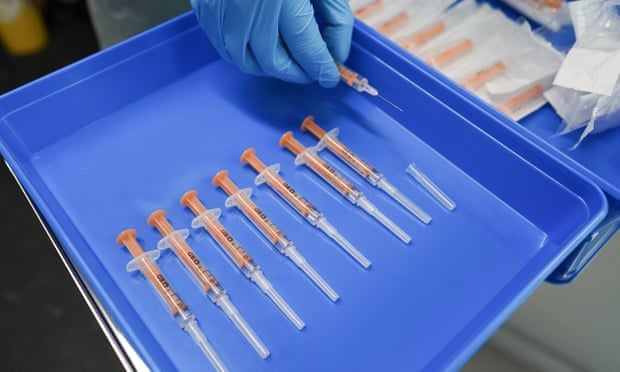 The Downing Street review which is considering making it mandatory for NHS workers to have the jab, as a way of protecting patients, has led to questions about its moral and legal implications.

A consultant in a busy north-west hospital said they would feel “incredibly uncomfortable” with the idea of forcing NHS staff to have the vaccine.

They said they would prefer a concerted high-profile campaign to encourage staff to have the vaccine, with a last-resort option of asking unvaccinated staff to take on different roles, away from the frontline.

“I would feel very uncomfortable with us forcing anyone to have it – you can’t force an injection into someone,” the consultant said.

On Monday, Public Health England (PHE) released preliminary findings from more than 7.5 million people aged 70 and over in England showing that both the Pfizer and AstraZeneca vaccines offer substantial protection from serious Covid infections.

Last week Care UK said it only wanted to hire new staff who had had the vaccine, while another care provider, Barchester, said it wanted all of its staff, including current workers, to have had the jab by 23 April, adding that if they did not they would not be considered for shifts.

The matron of a care home in Merseyside said there had been a lot of pressure put on her to have the vaccine, which was making her anxious.

“I feel our human rights to choose are being violated and as I practice normal infection controls I have as little or as much chance of passing on the virus as someone that has been vaccinated,” she said.

“I don’t want to be bullied into a decision when I have legitimate concerns. I feel being told I am selfish and putting others at risk is insulting.”

However, a CBT therapist in her 30s, who also works in the north-west of England believed all NHS staff should be vaccinated, regardless of their role. She said her hospital trust’s values emphasised “care, compassion and commitment” and individuals who refused the vaccine could potentially harm others.

“If we’re going to be caring for people, it comes under that value and it’s a core part of what the NHS is about. So if someone is saying they don’t want the vaccine, it puts into question whether you are going against the values of the trust.”

The therapist, who had her first vaccine in January, had come across colleagues who were nervous about taking the vaccine and one of them did contract Covid. She thought there was some misinformation circulating on social media, but felt that protecting vulnerable people should be the primary concern for all NHS staff whether or not they were working on the frontline.

She said: “I would prefer that everyone did [have the vaccine] that I was going to come into contact with at work. Because we don’t know transmission rates even though I’m vaccinated. If I’m sitting next to a man who hasn’t, then I could transmit it through my clothes or germs that I have, and pass it on to the next patient I see. And we see vulnerable people.”

Ministers are reportedly considering making vaccination mandatory for health and care staff because of evidence that a minority of them, particularly among those from black, Asian and minority ethnic backgrounds, are choosing not to have a jab.

Yvonne Coghill, a British NHS manager who currently serves on the NHS Equality and Diversity Council, said that she did not think making vaccines compulsory would disproportionately “punish” minority ethnic communities. However, she thought it could be counterproductive, making those already hesitating about taking the vaccine even more nervous about doing so.

“People have genuine questions to ask about taking the vaccine and they need to be heard and responded to respectfully, not forced to do something they don’t believe will benefit them,” said Coghill.

“We know that the trust levels of authority figures are lower in some communities than others, therefore making the vaccine mandatory might cause even more problems for people than we currently have.”

Coghill, who sits on the advisory board of the Health Foundation’s Covid-19 impact inquiry, which explores the pandemic’s implications for health inequalities in the UK, said she could not envisage a scenario where NHS staff would quit in disproportionate numbers due to being forced to take the vaccine.

“Most people are pragmatic and will weigh up the pros and cons of any decision to leave the service in terms of how it would ultimately impact them and their families. People have mortgages to pay and mouths to feed,” she said.

“I believe healthcare workers are very sensible people. Of course a few people might have strong views about the vaccine being made mandatory and leave, but do I envisage a mass walkout because of it? Definitely not,” she added.
#COVID-19  #vaccine  #Pfizer  #AstraZeneca  #Covid  #Vaccines
Add Comment