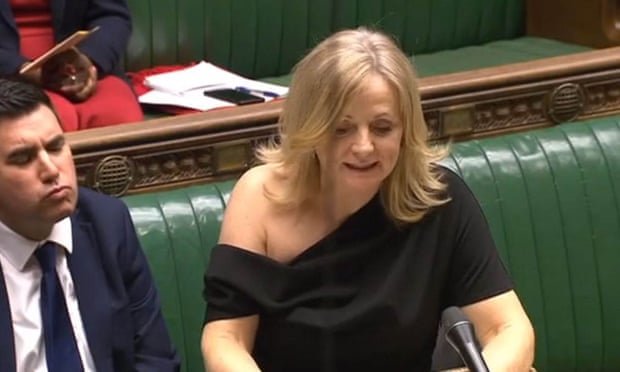 'I am not a slapper': Labour MP hits back at criticism of attire

A Labour frontbencher has shrugged off criticism over an outfit that showed part of her shoulder in the Commons as she spoke at the despatch box.

Tracy Brabin reported that she received a series of insults over her choice of attire on Tuesday. Her remarks were in response to a Twitter user sharing a photograph of her wearing the outfit and asking: “Is this really appropriate attire for parliament?”

The shadow culture secretary and MP for Batley & Spen said she was “not a slag, hungover, a tart, about to breastfeed, a slapper, drunk [or] just been banged over a wheelie bin'”.

Hello. Sorry I don’t have time to reply to all of you commenting on this but I can confirm I’m not....
A slag
Hungover
A tart
About to breastfeed
A slapper
Drunk
Just been banged over a wheelie bin.

Who knew people could get so emotional over a shoulder... 🙄 https://t.co/sTWWiEY2TF

Brabin was raising a point of order in the Commons on Downing Street’s decision to order senior journalists from some of the UK’s major news organisations to leave before a briefing on Boris Johnson’s Brexit plans.

Addressing MPs on Tuesday afternoon, she said: “The ability of the lobby to have access to briefings without favour is a longstanding tradition, and one vital to the health of a functioning democracy.

“The government’s behaviour in these matters threatens the civil service’s core values of impartiality and objectivity. It also brings into question the integrity of future government media briefings and the conduct of their special advisers, and it damages a free and vibrant press, which is central to this parliamentary democracy.”

Brabin has also spoken out against sexism in politics before, accusing some activists from her own party of trying to run deselection campaigns targeting female MPs that displayed an “element of misogyny”, shortly before the most recent general election. At the time, the party denied allegations women were being unfairly targeted.