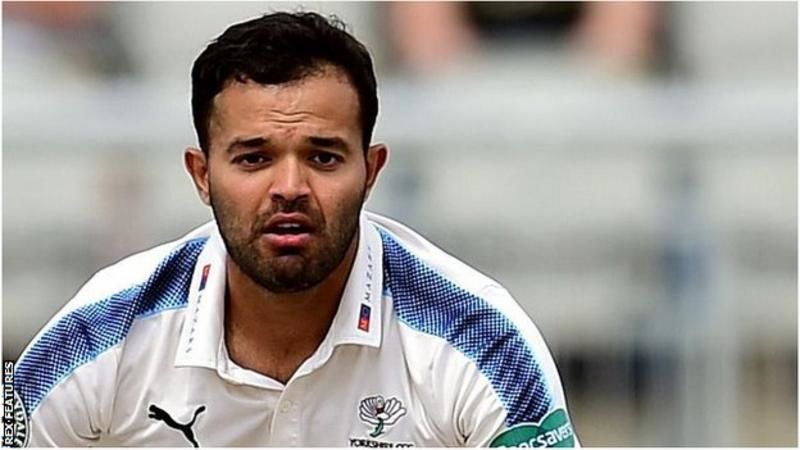 Two further Yorkshire board members have joined chairman Roger Hutton in resigning over the club's response to racism experienced by Azeem Rafiq.

Hutton "apologised unreservedly" to Rafiq, 30, when he quit his role on Friday.

Hanif Malik and Stephen Willis stepped down from the board following an emergency meeting later that day.

Lord Kamlesh Patel of Bradford has been appointed as a director and chair of the club.

A fourth board member, Neil Hartley, will step down in the near future after "ensuring smooth transition to new leadership".

Lord Patel is chair of the England and Wales Cricket Board's South Asian advisory group and was previously a board member at the governing body.

"The club needs to learn from its past errors, regain trust and rebuild relationships with our communities," Lord Patel said.

"Yorkshire is lucky to have a vast talent pool of cricketers, and passionate supporters, from all of our communities and we must re-engage with everyone to make a better Yorkshire County Cricket Club for everyone."

Hutton released a lengthy statement on Friday, admitting the club "should have recognised at the time the serious allegations of racism" raised by Rafiq.

He added that at Yorkshire he had "experienced a culture that refuses to accept change or challenge".

Hutton was also highly critical of the England and Wales Cricket Board (ECB), claiming the governing body "declined to help".

It comes after an investigation found Rafiq was a victim of "racial harassment and bullying" - but the club said they would take no disciplinary action.

On Thursday, Yorkshire were suspended from hosting England matches by the ECB.

The ECB said it was "clear" Yorkshire's handling of the issue is "wholly unacceptable and is causing serious damage to the reputation of the game".

Hutton claimed that when he was made aware of Rafiq's allegations, he "immediately reached out" to the ECB "to ask for their help and intervention to support a robust inquiry" but there was a "reluctance to act".

In response, the ECB confirmed Yorkshire had contacted them at the start of the investigation, but said: "Our role is to operate as a regulator across the entire game. We must act independently of any club investigations, should we ever be required to intervene as regulator - either during or after.

"The reason why our governance is structured in this manner, is perfectly demonstrated in the way that these issues have played out at Yorkshire County Cricket Club."

The ECB has confirmed it is to investigate a tweet sent by Yorkshire head coach Andrew Gale in 2010.

Gale told Jewish News he was "completely unaware" of the offensive nature of the term and deleted the tweet as soon as he was made aware.

BBC Sport has contacted Yorkshire for a response.

'Constant unwillingness to accept there was racism'

In a statement, Hutton said: "I would like to take this opportunity to apologise unreservedly to Azeem.

"I am sorry that we could not persuade executive members of the board to recognise the gravity of the situation and show care and contrition.

"There has been a constant unwillingness from the executive members of the board and senior management at the club to apologise and to accept [there was] racism and to look forward.

"During my time as chairman, I take responsibility for failing to persuade them to take appropriate and timely action.

"This frustration has been shared by all of the non-executive members of the board, some of whom have also now resigned."

Speaking about the ECB, Hutton, who will be questioned by MPs alongside senior Yorkshire officials and Rafiq on 16 November, added: "I was saddened when they declined to help as I felt it was a matter of great importance for the game as a whole.

"It is a matter of record that I have continually expressed my frustration at the ECB's reluctance to act."

Hutton, a lifelong Yorkshire fan and local lawyer, took up the role in April 2020 and said he "never met Azeem and was not at the club during the period he was employed."

Speaking on Thursday, Julian Knight MP, the chair of the Digital, Culture, Media and Sport select committee, said he hoped the sanctions handed down by the ECB would "act as a short, sharp shock to bring the club to its senses".

"Like the rest of us, I imagine the members of Yorkshire County Cricket Club will be questioning why the board is still in place," he added.

Many companies have cut their ties with Yorkshire, including kit manufacturer Nike, primary sponsor Emerald Publishing and Yorkshire Tea. On Friday, NIC Services Group, who sponsor the front of Yorkshire's shirt, suspended its partnership with the club with immediate effect.

England limited-overs captain Eoin Morgan, who is leading the side at the Men's T20 World Cup in the United Arab Emirates, says the issues raised by the report and Yorkshire's response to it need to be addressed.

"We want to see the sport in a great light but equally if there's an issue as serious as this we want it dealt with," Morgan said.

"We firmly believe that there is no place in our sport for any type of discrimination, and I think the actions of the ECB board to Yorkshire have indicated how serious they are about dealing with issues like this."

Meanwhile, former England captain Michael Vaughan says he was named in Yorkshire's report but "totally denies any allegation of racism".

Vaughan says the report states that in 2009, while he was still a Yorkshire player, he told a group of Asian team-mates, including Rafiq: "Too many of you lot, we need to do something about it."

On Wednesday, ex-England international Gary Ballance said he "regrets" using racist language towards Rafiq when they were Yorkshire team-mates.

2 September 2020: Following an initial interview with Wisden, ESPN Cricinfo publish an article with Rafiq in which he claims "institutional racism" at Yorkshire County Cricket Club left him close to taking his own life.

3 September 2020: Yorkshire say they have launched a "formal investigation" into the claims made by Rafiq and chairman Roger Hutton says the club would be carrying out a "wider review" of their "policies and culture"

5 September 2020: Yorkshire ask an independent law firm to investigate racism allegations against the club by Rafiq.

13 November 2020: Rafiq says he hopes to bring about "meaningful change" after giving his first statement to the inquiry.

15 December 2020: Rafiq files a legal claim against Yorkshire "claiming direct discrimination and harassment on the grounds of race, as well as victimisation and detriment as a result of trying to address racism at the club".

2 February 2021: Yorkshire threaten a lifetime ban for anyone found to have made threats against Rafiq or his family and legal team, after ESPN Cricinfo show them messages sent to Rafiq's legal firm.

17 June 2021: An employment tribunal case between Rafiq and his former club Yorkshire fails to find a resolution. The independent investigation into his racism allegations remains ongoing.

16 August 2021: Yorkshire receive the findings of an independent investigation into the racism allegations and, two days later, the England and Wales Cricket Board (ECB) asks for a copy.

19 August 2021: Yorkshire, yet to release the findings of the report at this stage, admit Rafiq was "the victim of inappropriate behaviour" and offer him their "profound apologies".

Rafiq accuses Yorkshire of downplaying racism by calling him the victim of "inappropriate behaviour".

8 September 2021: MPs tell Yorkshire to publish the findings of the report "immediately".

10 September 2021: Yorkshire release the findings of the report, which says Rafiq was the "victim of racial harassment and bullying" and seven of the 43 allegations made by the player were upheld by an independent panel.

According to Hutton, the report said there was "insufficient evidence to conclude that Yorkshire County Cricket Club is institutionally racist".

Yorkshire released a summary of the panel's report and recommendations, but said the full report could not be released for legal reasons "in relation to privacy law and defamation".

8 October 2021: Yorkshire miss a deadline to send the full report to Rafiq and his legal team after BBC Sport understands an employment judge ordered the club to release it in full by Friday, 8 October.

13 October 2021: Rafiq then receives a heavily redacted version, while the ECB says it is still awaiting the full report.

28 October 2021: Yorkshire says it carried out its own internal investigation after the findings in the report and concluded that "there is no conduct or action taken by any of its employees, players or executives that warrants disciplinary action".

2 November 2021: The Digital, Culture, Media and Sport select committee calls on Hutton to appear before it to answer questions about Yorkshire's handling of a report into Rafiq's allegations of racism.

MP Knight, chair of the DCMS select committee, calls on the board of Yorkshire County Cricket Club to resign after a leaked report emerges apparently containing details of the investigation into the treatment of Rafiq.

A story published by ESPN says the report had concluded that a racially offensive term used towards Rafiq was regarded as "banter".

Knight makes his comments after health secretary Javid calls for "heads to roll" at Yorkshire and said if the ECB did not take action "it's not fit for purpose". He further states in a Twitter post that the term allegedly used to describe Rafiq was "not banter".

The ECB announces it will conduct a "full" investigation into the situation.

3 November 2021: The date of the DCMS hearing is scheduled for 16 November and Rafiq is called to give evidence in person, along with senior Yorkshire officials.

4 November 2021: The ECB board suspends Yorkshire from hosting international matches.

Former England captain Michael Vaughan says he was named in the report but "totally denies any allegation of racism".

5 November 2021: Yorkshire chairman Roger Hutton resigns over the club's response and apologises "unreservedly" to Rafiq. Two further board members also quit and a fourth will step down in the near future. Lord Kamlesh Patel of Bradford is appointed as a director and chair of the club.

Former Yorkshire player Rana Naved-ul-Hasan says he heard an alleged racist comment made by Vaughan to a group of Asian players.