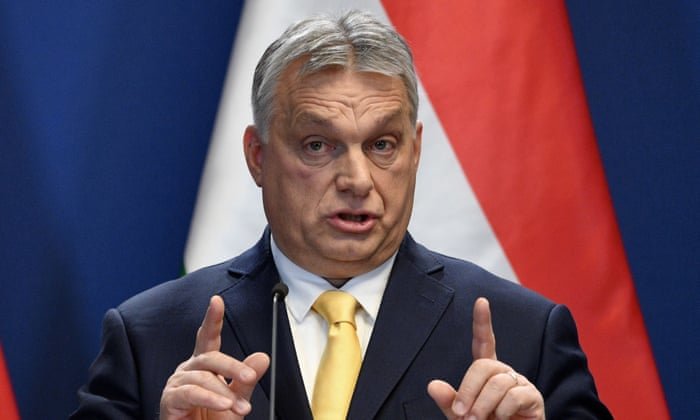 Far-right leader, known as conspiracy theorist, backs PM as ex-No 10 aide predicts close ties
Hungary’s far-right prime minister, Viktor Orbán, has given a ringing endorsement to Boris Johnson and Brexit, offering a pointer as to which European capitals are likely to be friendliest to post-Brexit Britain.

Orbán said Johnson and Donald Trump were “the most courageous, the most dynamic and the most ready to effect change” of all the politicians in the world today. The admiration is mutual: it emerged this week that Tim Montgomerie, a former aide of Johnson, said he expected Britain and Hungary to forge a “special relationship” after Brexit, and praised Orbán’s thinking on the “limits of liberalism”.

Most European leaders have expressed their dismay at Brexit, but Orbán, who believes Europe is “under attack” from Muslim migrants and has claimed the Jewish Hungarian-American philanthropist and financier George Soros has a plot to destroy Europe, said he is a fan.

“They have opened this vast door of opportunities for themselves. I’m sure there is a success story that will be written there,” said Orbán, during his annual press conference in Budapest on Thursday. He implied that if Hungary had the same financial, diplomatic and military strength as Britain, it may also have considered leaving the bloc.

His comments came as Michel Barnier, the EU’s chief negotiator, warned in a speech in Sweden that failure to seal a deal on trade over the next 11 months would damage the UK more than the 27 remaining member states.

“Yes, the UK represents 9% of all EU27 trade. But more significantly, the EU27 accounts for 43% of all UK exports and 50% of its imports,” Barnier said. “So, it is clear that if we fail to reach a deal, it will be more harmful for the UK than for the EU27.”

Also on Thursday, Croatia’s prime minister, Andrej Plenković, warned that negotiations over access to British waters for the EU fishing fleet had the potential to end in a repeat of the cod wars of the 1970s, when the UK was forced to deploy the Royal Navy to deal with outbreaks of violence on the seas.

Speaking as his country assumed the six-month presidency of the EU council , Plenković said he “never thought Brexit was a very bright idea”.

Orbán, however, criticised European leaders who thought Brussels held the cards in the negotiations and called on Europe to be “generous” during the next 11 months. “I think the EU misunderstands the situation, because they believe that a good relationship with UK is the Brits’ interest, but it is our interest too, the other members of the EU,” he said.

He paid a lengthy tribute to Johnson’s election victory last month. “The whole world was against him: the liberal leftist media, the global Soros network and all the tools of the pro-remain EU, but just because he and the British people believe in democracy, they’ve done it,” said Orbán.

The Hungarian prime minister has been in power since 2010, and in 2018 he won a third consecutive term. His government is in trouble with Brussels over corruption and rule of law issues, and has spent the past five years campaigning relentlessly on the supposed threat to “Christian Europe” from migration.

Orbán has promoted conspiracy theories, usually with antisemitic undertones, about the overarching influence of George Soros in Hungary and across Europe, and has also tapped into another far-right conspiracy theory, that of the “great replacement”.

He has built a fence along the country’s border with Serbia, and his government has been accused by human rights groups of starving migrants by denying them food in the transit zones where they must process asylum claims.

While all this has been criticised by rights groups and many European politicians, Montgomerie, a former journalist who was hired as a senior adviser to Johnson last September, praised the Hungarian government’s ideology, saying there was a lot for Britain to learn from Orbán, and promising close relations with the country after Brexit.

“Budapest and Hungary have been home, I think, for an awful lot of interesting early thinking on the limits of liberalism, and I think we are seeing that in the UK as well. So I hope there will be a special relationship with Hungary amongst other states,” said Montgomerie, in a speech to a thinktank in Budapest last month, comments that were posted online and first uncovered by Buzzfeed News earlier this week.

On Thursday No 10 described Montgomerie as a “former adviser” without giving a reason for his departure.
Add Comment