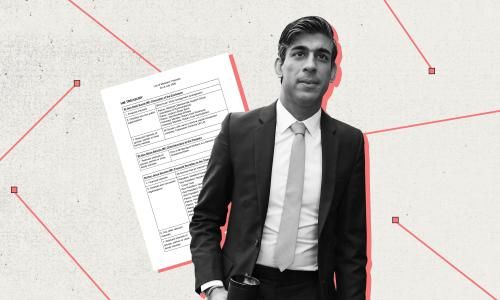 The chancellor, Rishi Sunak, is facing questions over the transparency of his financial affairs after a Guardian investigation established that his wife and her family hold a multimillion-pound portfolio of shareholdings and directorships that are not declared in the official register of ministers’ interests.

Akshata Murty, who married Sunak in 2009, is the daughter of one of India’s most successful entrepreneurs. Her father co-founded the technology giant Infosys, and her shares in the company are worth £430m, making her one of the wealthiest women in Britain, with a fortune larger than the Queen’s.

Sunak is bound by the ministerial code, which requires him to declare any financial interests that are “relevant” to his responsibilities, and which could conflict with his duty to the public. Ministers must also declare those interests of their close family, including siblings, parents, spouse and in-laws, which might give rise to a conflict.

But Sunak’s entry mentions no family members other than his wife, and only refers to her ownership of a small, UK-based venture capital company. Research by the Guardian shows that Murty and her family hold many other interests, including:

• A combined £1.7bn shareholding in Infosys, which employs thousands of staff in the UK and has held contracts with government ministries and public bodies.

• A £900m-a-year joint venture with Amazon in India, through an investment vehicle owned by Murty’s father.

• A direct shareholding by Murty in a UK firm which runs Jamie Oliver and Wendy’s burger restaurants in India.

• Five other UK companies where Murty is a director or direct shareholder, including a Mayfair outfitter that supplies the tailcoats worn by pupils at Eton College.

Sir Alistair Graham, a former chair of the committee on standards in public life, which acts as a watchdog for UK public office holders, said it was vital that Sunak declare the financial interests of himself and his close family given “the chancellor’s capacity to determine the government’s financial and business policies”.

“He seems to have taken the most minimalist approach possible to this requirement. Perhaps Rishi Sunak should carefully read the ‘Seven principles of Public Life’ to make sure he is fulfilling the two principles of ‘Honesty and Leadership’.”

Sunak and Murty have not responded directly to requests for comment. The Treasury said all the proper procedures for declaring interests had been followed, and that decisions about what to declare were not taken by ministers themselves but by civil servants and independent advisers.

A Treasury spokesperson said the prime minister’s independent adviser on ministerial interests “confirmed he is completely satisfied with the chancellor’s propriety of arrangements and that he has followed the ministerial code to the letter in his declaration of interests”.

After becoming chief secretary to the Treasury in July 2019, Sunak revealed for the first time that he was the beneficiary of a blind trust. He also included Murty for the first time, stating: “Mr Sunak’s wife owns a venture capital investment company, Catamaran Ventures UK Ltd.” There is no information about his own family or his wife’s parents and siblings.

Catamaran represents just a small part of the interests held by the chancellor’s wife. The source of her extraordinary wealth is a stake in Infosys, founded by her father NR Narayana Murthy (his children have dropped the “h” from their surname).

According to the Infosys annual report, Akshata Murty owns a 0.91% stake in the group; that stake is currently worth £430m. Each year, her shares entitle her to millions in dividends. Of all the family, only her brother, Rohan Murty, owns more of the company. The combined family holding is worth an estimated £1.7bn.

Murty’s holding is not secret, and it is not clear why it was not declared in the register. The interest could be seen to present a conflict, because Infosys is a contractor to the UK government and publicly funded organisations.

Since 2015, the firm has won taxpayer-funded work worth £22m, according to filings on the government’s contracts website. These include a £5m deal with the Medicines and Healthcare products Regulatory Agency, awarded in 2018, which runs until 2021.

Infosys has also worked for the Home Office and has signed a framework agreement with Whitehall, which means it can be awarded contracts without competition. The company employs an estimated 10,000 staff in the UK, some of whom benefited from Sunak’s furlough scheme.

The Murty family has invested part of the wealth created by Infosys through Catamaran Ventures, which takes stakes in growth businesses. It is understood Murty has no financial or legal interest in the Indian arm of Catamaran. However, the fund benefits other family members, including her father. One of its most successful deals is a partnership with the online retailer Amazon.

Together they own Cloudtail, one of the largest sellers on Amazon’s Indian marketplace, with revenues of over £900m last year. The investment could be seen as a conflict of interest, given that the chancellor is responsible for decisions about how to tax large digital corporations, such as Amazon, in the UK.

Murty set up Catamaran’s UK arm with Sunak in order to invest her private wealth. He transferred his shares to her just before entering parliament and she is now the sole owner. Through it, she has invested in a clutch of start-up businesses. What Sunak has not declared is that his wife also holds direct shareholdings – in her own name, rather than through Catamaran – in at least six UK companies.

She is an investor and director at the gentlemen’s outfitters New & Lingwood, which measures Etonians for their tailcoats, and sells silk dressing gowns for £2,500 each.

Murty also holds shares in a UK business which operates Jamie’s Pizzeria, Jamie’s Italian and Wendy’s outlets in India, the nanny agency Koru Kids, and gyms operator Digme Fitness, where she is a director. Both Digme and New & Lingwood have furloughed staff during the pandemic. Soroco, a software company co-founded by her brother, lists Murty as a director of its UK arm.

Before entering the Treasury, Sunak met the government’s then head of propriety and ethics, Helen MacNamara, to decide what needed to be declared, a government source said. MacNamara reviewed the interests of Sunak and Murty and confirmed at the time, and again recently, that she was satisfied with what had been registered. Sir Alex Allan, the former independent adviser on minister’s interests, also approved the disclosures, according to the source.