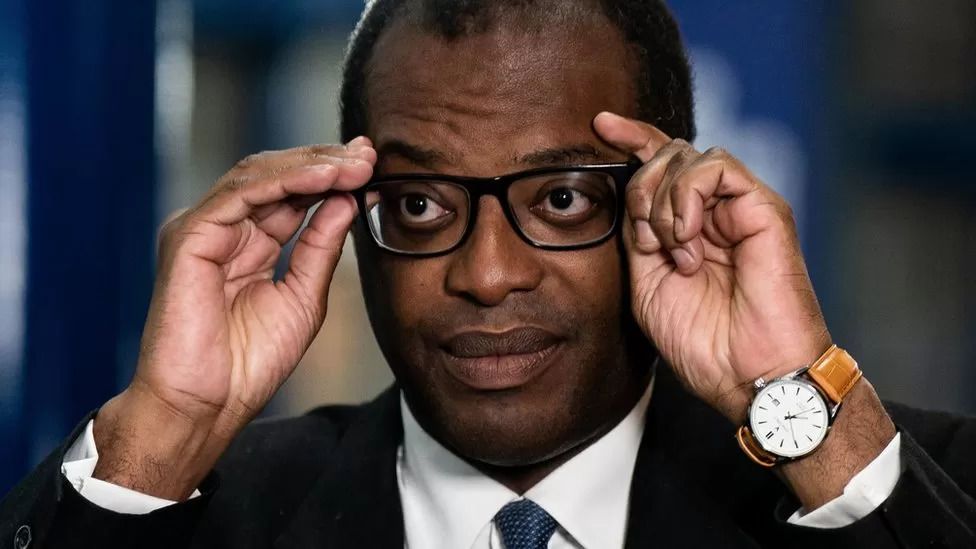 On Sunday morning, she was telling Laura Kuenssberg her plan to scrap the additional rate of tax was here to stay.

Are you completely committed to it? Yes, she replied confidently.

As late as last night, senior ministers were defending the plan in the fringe meetings around the conference.

But something had changed.

The prime minister and chancellor held a series of crisis talks over the course of Sunday, as it became increasingly clear the policy was unsellable.

The telltale signs were there. Conservative MPs were hitting the airwaves and social media to say they thought it was wrong. They had a talisman in the form of Michael Gove. What many had been saying privately was not coming out in public.

The warning they might lose the whip seemed to be counterproductive; it infuriated sceptical MPs who didn't think the prime minister had the authority to see it through.

Grant Shapps - famous around Westminster for his ability to predict the result of votes - warned the government could lose in the Commons. Privately, Labour was confident of the same.

And by the time Mr Shapps appeared on the BBC's News at 10pm - to say the government had got its priorities wrong - the policy was already destined for the dustbin.

It was late evening when the final decision was made. Liz Truss and Kwasi Kwarteng gathered for talks in the Hyatt Hotel in Birmingham, just beside the conference venue. They both now agreed: the policy had to be dumped immediately.

It was agreed the chancellor would kill it off in the morning in his BBC interviews.

Some senior cabinet ministers found out this morning, shortly before the announcement was made and after it had been reported, first by the Sun newspaper.

This is a significant blow for a government that has been in office for less than a month. It's a personal blow for a chancellor who had always prided himself on sticking to his guns.

Despite that, Mr Kwarteng's allies insist he is calm and even relieved that the policy is dead.

"He knew this was going to dominate everything," one says this morning.

But any sense of calm doesn't extend far beyond Mr Kwarteng's hotel room.

Around the conference centre, the Conservative Party feels as febrile as at any point in the past couple of years.

In the words of one former minister: "No wonder Labour are laughing. You couldn't make it up… it's just incompetence."

What's been noticeable is that many true-believers aren't sure she's made the right decision.

I asked one cabinet minister, close to the prime minister, if she'd made the right decision. They shrugged, adding: "There was an inevitability to it."

One minister I spoke to put it politely when they said they were "not happy".

"It undermines credibility," they said, predicting that Tory backbenchers would now be emboldened to challenge policies they didn't like, a daunting prospect for a new prime minister just a few weeks into the job.

A backbencher, who opposed the 45p policy, said junking it was bad for the PM's authority: "It looks weak."

Language we couldn't publish has been used more than once this morning.

Another MP who backed Ms Truss for the leadership was more sanguine, but still sceptical: "I'm not sure I would have gone for the u-turn. But she's done it and we need to support her."

But there's also a question mark over the relationship between the prime minister and her chancellor.

She told the BBC on Sunday that the decision to scrap the 45p rate was his. He said this morning that the U-turn decision was hers (he later said it was both of them).

When Ms Truss and Mr Kwarteng moved into Downing Street, they were seen as the closest of political friends. Allies said they would be joined at the hip.

More than a few eyebrows were raised by the willingness to attribute a decision to the other in the past couple of days.

Sources close to them say the idea of a split is overplayed. But a month in, not many people would have expected it to be a discussion at all.

So what state is the government in this afternoon? Battered and bruised? Definitely humiliated? Probably.

Unable to recover? Some Tories think so.

A former minister told me the conference has a "last days of Rome" feel about it. They warned the government hasn't solved the problem of unfunded borrowing, which will still be well over £40bn for tax cuts.

But in doing so, the prime minister is admitting her determination to fight for unpopular policies only goes so far.

There is a limit to how unpopular they are prepared to be.