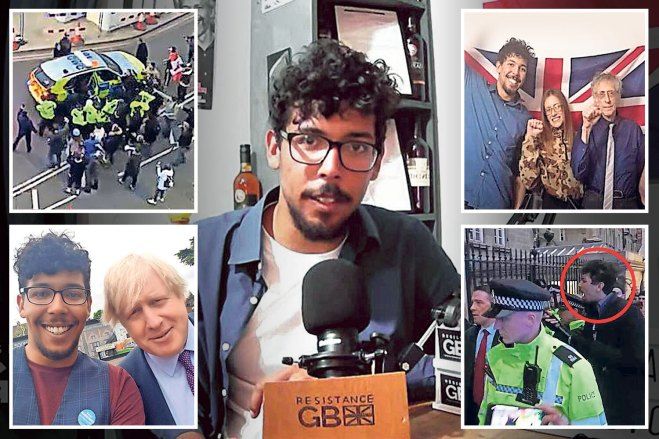 But then Will Coleshill is not all that he seems. 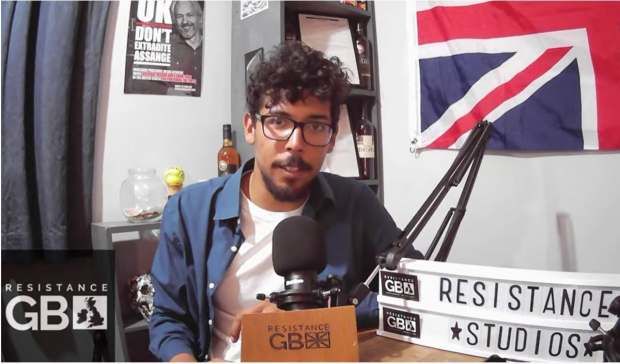 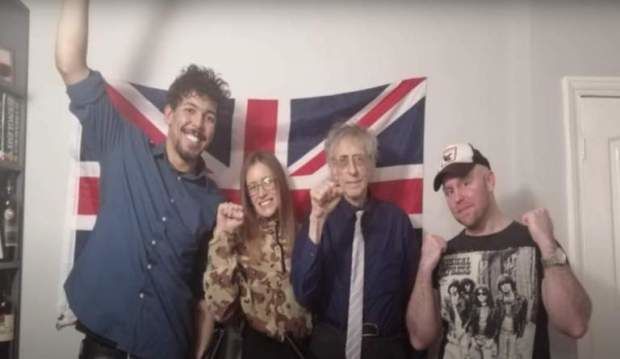 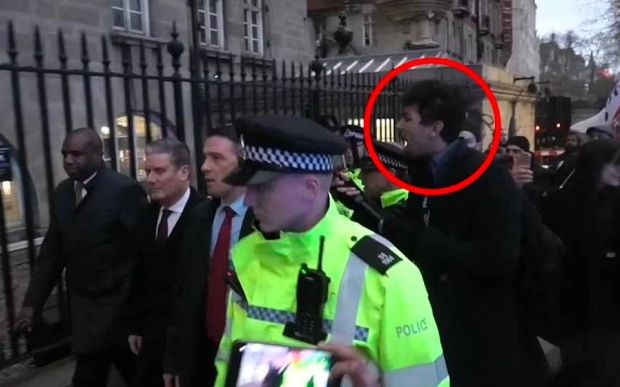 The 27-year-old is the fanatical face of “Resistance GB” — a radical anti-lockdown group intent on bringing Canada-style chaos in the UK.

Just last week, Coleshill was part of a mob who chased Sir Keir Starmer in Westminster.

Coleshill filmed the Labour leader being mobbed on Monday and could be heard yelling questions at him throughout.

The baying crowd, some draped in Canadian flags and caps, shouted “F***ing traitor!” and “Nonce!” at Starmer, falsely accusing him of ­protecting paedophile Jimmy Savile.

The slur has gained ground since PM Boris Johnson claimed Starmer, in his former role as Director of ­Public Prosecutions, had targeted journalists and not the TV presenter.

A man — not Coleshill — and a woman were arrested for assault after a traffic cone was thrown at police.

And in one online rant he claimed the Queen was the “worst monarch in English history”, dubbing her “that vile woman”.

Largely produced from a cramped bedroom, the group has 73,000 subscribers on YouTube, where its videos have been viewed 8.3million times.

Tens of thousands of others follow the movement on Twitter and fringe platforms such as Telegram, Rumble and Odysee.

And it is from his bedroom that Coleshill, Resistance GB’s self-styled “editor-in-chief”, spreads a host of wild conspiracy theories in front of a grubby poster of his hero, controversial WikiLeaks founder Julian Assange.

On Odysee, more “uncensored” videos can be found, including footage of a rally led by far-right leader Tommy Robinson.

And more recently, Resistance GB has hailed the truckers’ blockade that has brought Canadian capital Ottawa to its knees.

The 500-vehicle “freedom convoy” has gridlocked the city for almost a fortnight, causing chaos and calling on PM Justin Trudeau to quit.

The defiant Premier dismissed the truckers as “a few people shouting and waving swastikas” — but world leaders fear the blockades could spread like wildfire across the globe.

In recent months, Coleshill has hosted fawning interviews with the Canadian protest’s leaders and falsely claimed the UK has built “concentration camps” to tackle Covid.

And laughing, he tells viewers in one video how some opponents to Covid passes protest by wearing yellow Star of David badges — used by the Nazis to indicate Jewish people in the Holocaust.

So just who is the leader of the Resistance GB movement?

The answer is even stranger than some of his theories.

For The Sun can reveal Will Coleshill is not who he appears to be — even down to his real name.

He was born CongoRay Salamat in December 1994 to mum Claire, who was then 23.

She had married to husband Emanuel, a law student from Caribbean island Dominica, four years previously.

Emanuel was 13 years her senior — and friends say the pair split soon after the baby was born.

CongoRay was left in the care of his gran, Margaret Coleshill, now 74, in Enfield, North London, where he is still believed to live.

He is thought to have spent part of his childhood in care.

Coleshill is said to have lost contact with his father — perhaps for understandable reasons.

Emanuel Salamat was already a convicted fraudster when his son was born.

Salamat’s deportation to Dominica was ordered in the early 1990s.

He is thought to have later returned to the UK and remarried — only to be convicted of child sex offences in January 2010.

Salamat, 64, was finally deported back to Dominica in 2013 after serving half of a five-year jail sentence at HMP Pentonville.

Despite his troubled background, Coleshill did well at school, going on to Manchester University to study politics and philosophy.

But pals say his turbulent childhood left him “with a huge chip on his shoulder” towards authority.

One former friend told The Sun: “He had a real loathing for the local council and said he’d spent time in care.

“The suggestion was he’d been briefly taken away from his gran, who he adored.

“He was clearly very intelligent, but he held some very odd views.”

Coleshill spent time working as a teaching assistant and in the office of Tory MP Nick De Bois.

The friend added: “He was always very political. He was drawn to causes and protests very easily.”

But just weeks later he had his party membership and the whip suspended after making racist comments at a council meeting.

Speaking to a Labour councillor of Turkish heritage, Susan Erbil, Coleshill added: “When the Erbil family entered this country, did they bring a classroom with them?”

His outburst led to cries of “racist”, “shame” and “resign”.

He was later removed from the council for failing to attend any further meetings for six months.

A year after his ousting in November 2018, Coleshill formally apologised to the council.

And as the pandemic unfolded at the start of 2020, Coleshill was drawn like a moth to a flame.

He was charged with taking part in an anti-lockdown demo at Speakers’ Corner in London’s Hyde Park in November 2020, although the case was later dropped.

In April last year he hosted a video interview with Piers Corbyn, in which the former Labour leader’s brother talked of his role in helping to “destroy the new normal and the new world order”.

Now sources say Coleshill has realised the potential of latching on to “resistance” movements overseas to build his own profile.

Resistance GB has recently hosted a series of interviews with key figures in the Canadian protests.

In an hour-long video interview, Coleshill heaps praise on protest leader Chris Saccoccia, known to Canadians as Chris Sky, and trades conspiracy theories with him.

And in an earlier video interview with two other Canadian activists, Coleshill tells viewers how the UK is “building concentration camps” as part of its Covid strategy.

He is seen telling the activists “there’s pretty good evidence to suggest Fidel Castro was Justin Trudeau’s father” before launching into a rant about the Queen.

With his co-editor, identified only as “Laura”, by his side, Coleshill tells viewers: “Did you see Philip Mountbatten’s funeral?

“You’ve got Elizabeth Windsor just sort of sitting there with a muzzle on, no one near her, right, and you just think, ‘Is she as gaga as Joe Biden?’

“That vile woman. There’s no bill (that) can become an Act (of Parliament) without her signing off on it.

It denied Coleshill and his colleagues were “activists” and said they were journalists.

When asked about Coleshill’s comments about “concentration camps”, the group claimed its members were “journalists for a news outlet”.

And it said it interviewed “people from all backgrounds” and promoted “the right to live freely”.

He says: “People are likely to be drawn in by viewing a picture or reading a post on social media that shocks them into exploring further, which can then set them on a path to extremism.

“The vast amounts of disinformation, sometimes funded by shadowy sources, is swirling around them with little in the way of scrutiny.” 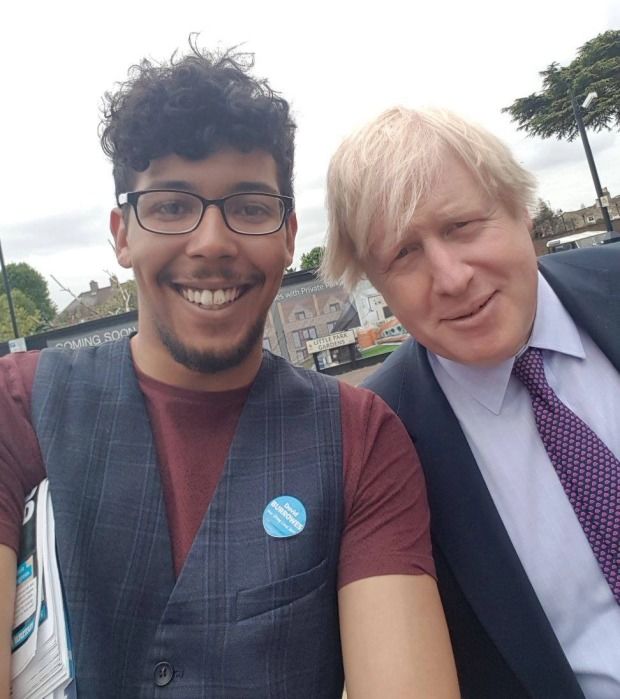 Coleshill with Boris Johnson in 2018 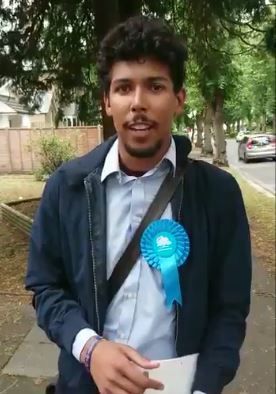 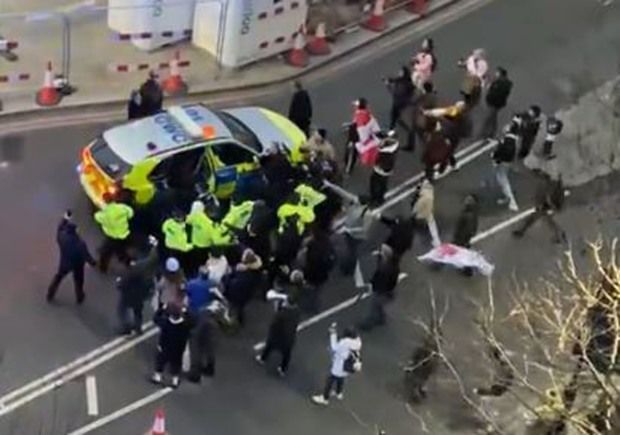