Hotel quarantine guests can leave and will be refunded

People in quarantine hotels in England have been told they can leave confinement, as long as they have tested negative for Covid.

Health Secretary Sajid Javid also confirmed guests will be refunded for the days they have not used.

It comes after the government took all 11 countries off its travel red list earlier on Wednesday.

From late November, UK arrivals from these places had to book and pay for an approved hotel and isolate for 10 days.

But on Tuesday, Health Secretary Sajid Javid said the Omicron Covid variant had spread so widely that the rules were no longer effective.

According to a letter from the Department for Health, hotel guests will be allocated time slots to leave, organised by floor, from 16:00 GMT onwards on Wednesday.

People have been advised they are required to stay until formally told they can leave. Guests will be asked for details of their onward destinations for test and trace.

Speaking outside a vaccination centre, Mr Javid said: "Anyone that is in a quarantine hotel that has not tested positive, I want to see them leave those hotels today and they will get a refund for the portion of their hotel... that they have not used."

Anyone who tests positive must continue to complete their quarantine at the hotels, the government says.

The same applies to unvaccinated guests who have been in contact with someone who has tested positive. 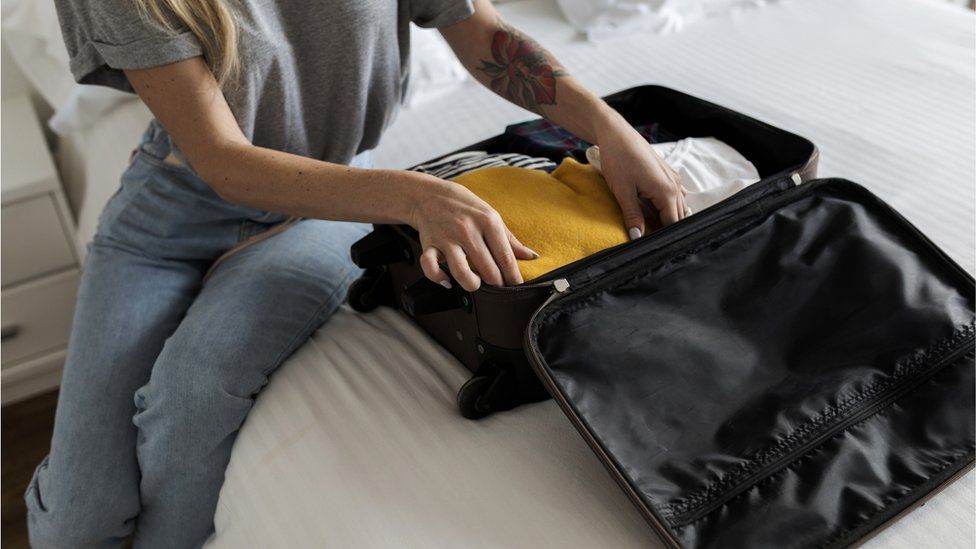 The government had said on Tuesday that guests would be allowed to leave early, but took a further 24 hours to officially confirm when, angering some.

By Wednesday morning, some guests had already left their accommodation and returned home.

One guest near Gatwick airport told the BBC hotel staff had tried to stop her leaving, but she'd walked out. She saw several cars parked outside picking up other people.

Another said security guards told her and her husband to return to their rooms, but they were able to board a minibus they'd arranged to take them home.

'Thrilled to be out'

Ruth Horton, who left a hotel near Heathrow after she was told that she could, told the BBC she was "absolutely thrilled to be out of quarantine".

"When we were leaving, there was joy in the foyer. You could just see everyone was anxious to get out, but there was happiness. The staff, security, everybody was extremely helpful," she added.

Ms Horton said it was "great" she could claim back the hotel costs of the days not used, but added it would be "really nice" if the whole amount could be refunded.

Roughly 5,000 people have come through the hotel quarantine system since the red list was re-started in late November, according to Jonathan Mogford of the UK Health Security Agency.

Speaking to the Transport Select Committee on Wednesday, he said the latest figures suggested about 5% of people in the hotels had tested positive for Covid. Of those, between 1% and 3% had Omicron.

Since late November, all UK arrivals from red list countries have been required to pay for and self-isolate in a pre-booked, government-approved hotel.

Some travellers have paid thousands of pounds, with complaints of chaotic organisation and inedible food during their stays.