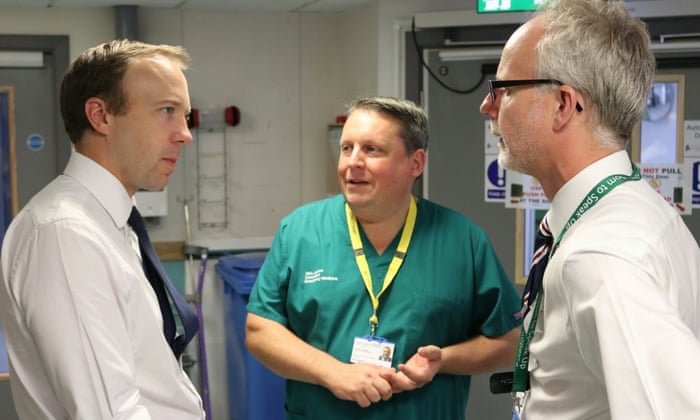 The incident had already prompted internal complaints from senior staff at West Suffolk hospital, but the whistleblower decided to take matters a step further when the same doctor was later involved in a potentially botched operation.

The whistleblower then wrote to relatives of a dead patient and urged them to ask questions about the conduct of the doctor and his background.

When they did this, the hospital launched a widely criticised “witch-hunt” in an attempt to find out the identity of the leaker.

The doctor’s drug use, which the trust has never acknowledged until now, helps explain why it demanded fingerprint and handwriting samples from staff – tactics which the NHS regulator roundly condemned in a hard-hitting report last week.

Last month Hancock ordered the trust to undergo a rapid review from which he recused himself after failing to act on doctors’ concerns about bullying.

In an anonymous letter to widower Jon Warby, the whistleblower said the self-injecting doctor was later present when medical blunders were made before the death of Warby’s 57-year-old wife, Susan, in August 2018.

The letter said: “He had injected himself with drugs before, while in charge of a patient and it was all hushed up.

“You need to ask questions about this doctor and what investigations had been [made] about him before. We think there is a big cover-up.”

Consultants at the trust had already raised the alarm that the doctor’s use of injected drugs could pose a risk to patients by impairing his judgment and coordination.

But rather than address the criticism of its handling of the problem, the trust’s management launched an extraordinary hunt to identify the whistleblower.

The Care Quality Commission said the lengths to which the hospital was going to find the whistleblower were “unprecedented and concerning” as it handed out its biggest ever rating downgrade.

It said the “questionable” tactics left doctors feeling intimidated, at loggerheads with bosses who it said were too focused on who sent the letter rather than why they had done so.

One doctor at the trust told the Guardian “more than 10 people felt really concerned” about the doctor’s behaviour after he was seen injecting himself intravenously with magnesium sulphate and another drug used as painkiller. They claimed the trust failed to properly respond to the incident and offer the doctor appropriate support and time off work.

A letter from a consultant sent to the trust’s medical director, Dr Nick Jenkins, in March 2018, confirmed there was “a great deal of concern” after the self-injecting episode was logged as a patient safety incident.

The letter, one of four formal complaints on the issue, said: “Rapid IV administration of magnesium can cause arrhythmias and hypotension and it is only given in this way in monitored patients. The self-administration of this drug intravenously whilst being on call can therefore only put patient safety at risk.”

It recommended that the doctor be given a “a period of leave whilst doubts are put to rest”.

A trust investigation into the incident found the doctor had done no harm to patients. The General Medical Council was informed but recommended no disciplinary sanctions.

The Guardian can also disclose that the trust is still trying to discipline a suspected whistleblower using handwriting samples and demands for fingerprints despite being heavily criticised for the practice by CQC and publicly stating it had stopped using it.

After the Guardian first revealed the trust’s tactics, managers delivered written apologies “for the stress and upset caused” to all staff involved and said it “no intention of pursuing fingerprint requests further”.

Despite this public display of contrition, bosses have since refused to drop disciplinary action against a doctor accused of being the mole on the basis of handwriting samples and their refusal to provide fingerprints.

The trust’s chief executive, Steve Dunn, personally assured a meeting of consultants that the management would no longer be using handwriting and fingerprints to pursue the matter.

A doctor said: “There is no contrition. The trust continued to pursue an aggressive and intimidatory campaign based on biometrics culminating in accusing an entirely blameless individual.”

A spokeswoman for the trust refused to discuss the investigation directly but pointed out that it was now subject to the rapid review, being overseen by the health minister Edward Argar. She said: “In these complex cases, an independent review with maximum transparency is the right way forward, and we are in support of this approach.”

On the self-injecting doctor she said: ““The matter was investigated in line with trust policies and discussed with the GMC. The individual no longer works at the trust, but, as part of our duty of care, support was provided to ensure they were fit and well to be at work during their time here.”

The letter to Warby prompted Suffolk’s senior coroner to refer the drug claim to the police. Suffolk police decided not to investigate after establishing that no illegal drugs were involved.
Add Comment