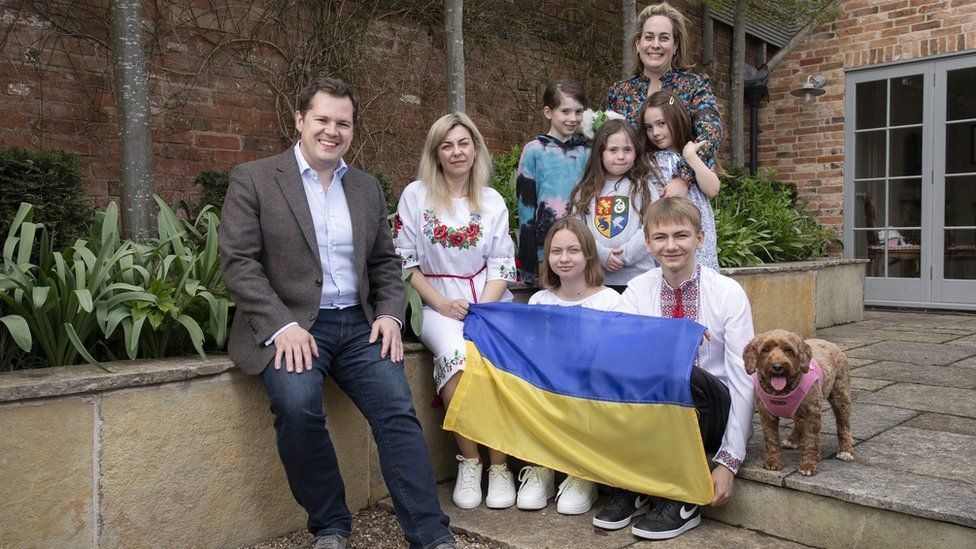 A former cabinet minister has taken in a refugee family under a government scheme to help those fleeing Ukraine.

Robert Jenrick, the MP for Newark, and his family have welcomed Maria, 40, Christina, 11, and Boden, 15, into their Nottinghamshire home.

He is thought to be the first MP to take in refugees under the Homes for Ukraine scheme.

Mr Jenrick said both families had found it "very emotional" when they finally met in person at Stansted.

"I think the family we are sponsoring were happy to be in a place of safety," he told the BBC. "Like most Ukrainians who come under the scheme they are leaving behind husbands, fathers, relatives and friends so there are mixed emotions."

The former communities secretary said his family had discussed doing something to help after being moved by the news from Ukraine, and had been put in touch with the family through another Ukrainian family who was staying with friends.

"The process was relatively slow to begin with but well worth the wait from our perspective," he said, adding that Maria and her family had been "absolutely lovely".

As of Wednesday 25,100 visas have been issued under the Homes for Ukraine Scheme - which allows families in the UK to sponsor refugees to come and live with them - from 55,600 applications.

Since it began the scheme has faced criticism for being slow - and Home Secretary Priti Patel has previously apologised for the delays in granting visas.

Several MPs and government ministers have previously said they would be open to hosting a Ukrainian refugee. Environment minister Victoria Prentis was the first to welcome one, according to the Telegraph, although Vika came to the UK via an existing scheme, not Homes for Ukraine.

Mr Jenrick said that he was hoping to arrange places at school for the two Ukrainian children now under their roof in the coming weeks.

While he said he would encourage anyone who was lucky enough to be in the position to host a refugee to do so, he said that it was a commitment which "should be entered in to seriously".

"But I think it is going to be a very rewarding experience for my family," he said, adding that it had made them grateful for the life they have in the UK.

Mr Jenrick told the Daily Telegraph's Chopper's Politics podcast - which first reported the story - that the process had been "overly bureaucratic" and red tape had "tested the patience" of sponsors and the families applying for the scheme.

In his experience, he said it took around three weeks to get the three visas needed.

"There were simple things that we could and should have done from the outset, like having the form in Ukrainian, for example," he told the Telegraph, adding he was not sure it was necessary for security checks to be done on minors who were "extremely unlikely to be a threat to this country".

But Mr Jenrick said it had not been too difficult to find a family wanting to come to the UK.

It has meant a busier house with the Ukrainians joining Mr Jenrick, his wife, their three children and two dogs in the family home.

But he told the Telegraph's Christopher Hope the experience had been humbling for him and his family, and said they would be "a little less selfish" for the experience.

Maria and her children had been through "harrowing" experiences in Ukraine, he said, and had queued for seven hours at the Polish border on their way to the UK.

"It does feel very rewarding," he said. "It's a very tangible way to reach out and help another family."

He added that he was looking forward to spending the Easter weekend with his "new extended family".

Asked if he had received the £350-a-month payment being offered to hosts as part of the scheme Mr Jenrick said that either they would return the money or it would be given to the Ukrainian family.