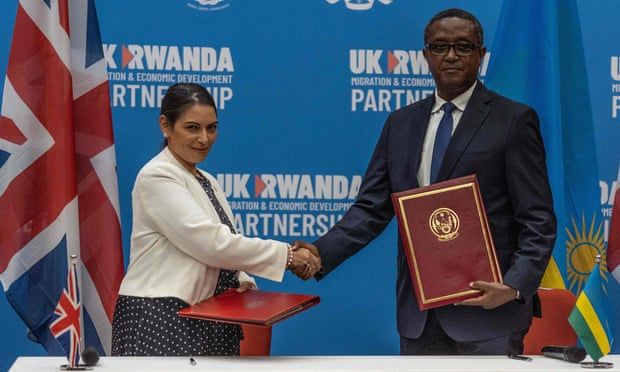 On an intranet noticeboard civil servants drew a comparison with serving under Adolf Hitler, and asked if they had a duty to ‘resist’
Home Office staff have threatened to strike and drawn comparisons to working for the Third Reich over Priti Patel’s plan to send asylum seekers to Rwanda, it has emerged.

Comments on an internal online noticeboard include calls for industrial action to stop the policy and concern from a staff member of 20 years who feels “deep shame” and is considering their position.

One anonymous civil servant drew a comparison to serving under Adolf Hitler. In a reference to the post-second world war Nazi trials at Nuremberg, they wrote: “The words ‘I was only obeying orders’ are echoing down through history to me and making me queasy.” They were later chastised by a colleague for making “absurd comparisons”.

It comes as a Conservative MP challenged the government’s plan to build a processing centre for asylum seekers in a small North Yorkshire village.

The internal comments, first disclosed by Mail+, reveal that dozens of staff have voiced their opposition to the agreement with Rwanda, which was signed off by the home secretary this week and has been applauded by Boris Johnson.

One Home Office staff member asked whether staff would have a duty to campaign against the policy. “Do we have a responsibility to not just leave, but to organise and resist? We cannot simply wash our hands and walk away,” they wrote. Another asked: “I find the government proposal totally unethical and it impacts directly upon my workstream. As a civil servant can I refuse this type of work in contravention of my own ethics?”

Another said: “I’ve worked for the Home Office for 20 years. There’s been some ups and downs in that time. But this announcement has made me feel deep shame and is the first time I am considering my position here and whether I need to get out of this department.”

Another stated: “Can the permanent secretary and seniors give staff any advice on coping with our conscience with these sort of policies? I don’t feel safe telling people I work for the Home Office any more and now just make up a nondescript role in another government department when asked what I do for a job.”

The report has been confirmed as accurate by a Home Office source. The comments will be put to the Home Office permanent secretary, Matthew Rycroft, during an online group call for staff on Thursday.

In a further development, the local Tory MP has challenged plans for a new centre at the former RAF base Linton-on-Ouse, announced as part of the government’s new migration measures.

Kevin Hollinrake, representing Thirsk and Malton, initially suggested he was sympathetic to the plans.

But on Wednesday, after meeting Patel, he called for the proposal to be reversed and threatened to support a judicial review if it is not.

“The current proposal of 1,500 young men in an open camp in the heart of a small rural village is not workable, sustainable or acceptable,” wrote Hollinrake in a letter to the home secretary. “It simply cannot be that availability of a site dictates the appropriateness of the location,” he said.

Some Conservative MPs raised concerns over the Rwanda policy on Wednesday as they debated the government motion to disagree with Lords’ amendments to the nationality and borders bill.

Simon Hoare, the MP for North Dorset, said: “A safe route clearly would kill the evil traffic of people-smuggling at a stroke. That’s one way of dealing with it.

“I fail to see how moving people to Rwanda is going to in any way disrupt this money-making scheme which these people traffickers have. They’re just going to use different routes to land people on our shores. I’m just not getting it, I’m afraid.”

“Can I make the point that the salary of an immigration tribunal judge, first tier tribunal judge, is £117,000. If you put on costs, even most generously, that’s about £200,000.

“Look at the £120m so far committed to the Rwanda scheme; there’s about 600 first tier tribunal judges could be bought for that, or any number of hundreds of Home Office case workers. Would that not be an alternative, actually to invest in the current system? … That would be a constructive alternative, surely,” he said.

Tom Pursglove, the junior migration minister, replied: “That of itself will not solve this issue and I genuinely believe that the approach that we are taking through the comprehensive plan will shift the dial, will change the dynamic and will ultimately help us to shut down these evil criminal networks.”

A Home Office spokesperson, said: “The Home Office is committed to constructive and open conversations with staff on our policies. However, personal attacks are unacceptable and we will remove comments from our channels that are disrespectful, break our guidelines or contravene the Civil Service values of integrity, honesty, objectivity and impartiality.”
#Boris Johnson  #Priti Patel  #Johnson
Add Comment