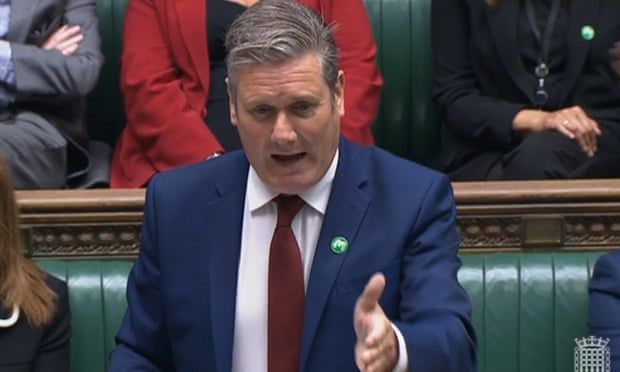 Labour and CBI express concerns the government’s tax policies are bad for business and workers
Higher national insurance payments will leave low-paid frontline workers potentially more than £1,000 a year worse off, while also depriving firms of the cash needed to invest, according to the latest analyses.

The combination of higher national insurance contributions (NICs), Universal Credit cuts and a freeze on the income tax personal allowance, would take £1,040 a year away from the average supermarket worker, according to Labour. The retail sector is the UK’s biggest private sector employer. For hospitality workers, nurses and social care workers the hit is bigger at about £1,100.

Keir Starmer said the figures showed the impact of the government’s policies on people’s everyday lives and suggested the Conservatives were “putting the very wealthiest ahead of working people who have to pick up the bill”.

The Labour leader was scathing about last week’s announcement of a 1.25 percentage point increase in NICs, saying it would not “fix the crisis in social care, will not clear the backlog in our NHS and will not protect homeowners from having to sell their homes to pay for care”.

In a speech on Monday at the Alliance Manchester Business School Tony Danker, the director general of business lobby group the CBI, will warn that higher business taxes and lower investment are not a plan for economic growth.

“After the pandemic, we in business believe that we should pay our fair share to tackle the debts of Covid,” Danker will say. “That is why many business leaders accepted the jaw-dropping six-point corporate tax increase announced in March.”

But he will say there is now a real risk the government will keep turning to business taxes to “carry the load” and the choice of national insurance to fund social care is the latest example of this.

“I am deeply worried the government thinks that taxing business – perhaps more politically palatable – is without consequence to growth,” he will say. “It’s not. Raising business taxes too far has always been self-defeating as it stymies further investment.”

A government spokesperson said: “This government has consistently backed business – including through our £400bn plan for jobs – and we’ve shown we are committed to supporting business investment, extending the annual investment allowance increase for another year and introducing the super-deduction – the biggest two-year business tax cut in modern British history.”
#Covid
Add Comment