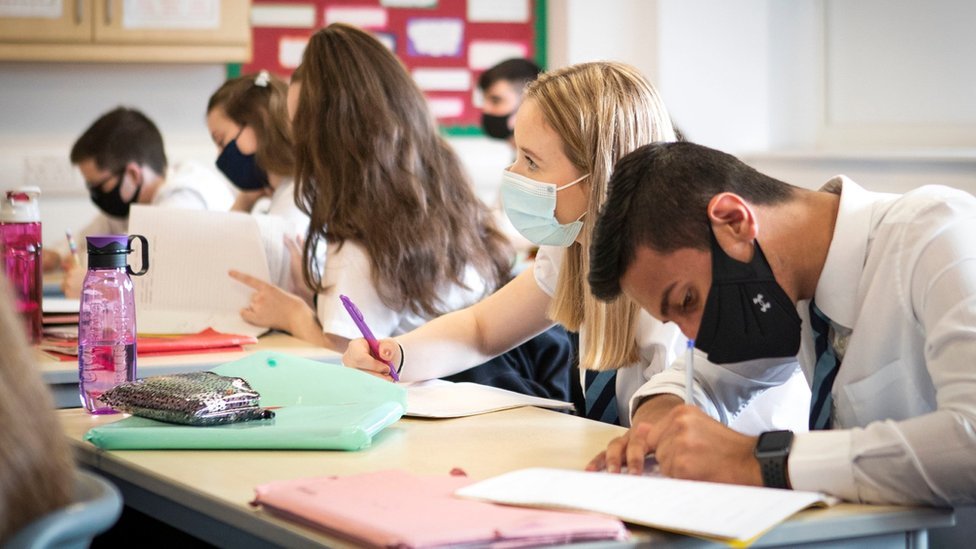 Higher exams to be cancelled for Scottish pupils

Next year's Higher and Advanced Highers exams are to be cancelled in Scottish schools, it has been confirmed.

Education Secretary John Swinney said the decision was based on the disruption that Covid has caused to the education system rather than safety concerns.

The move means that pupils' final grades will be based on the judgement of their teachers.

The country's National 5 exams have already been cancelled.

There were more than 200,000 entries for Higher and Advanced Higher courses this year.

The Scottish government had previously said a final decision on whether the exams would go ahead would not be taken until the middle of February.

But teaching unions had warned that timescale would be too late, with the EIS calling last week for an early decision to be made to cancel the exams and switch to an alternative assessment model.

Mr Swinney told the Scottish Parliament that many pupils had already lost "significant learning time" through having to self-isolate in addition to the teaching time they lost before the summer holidays.

And he said the level of disruption had not been equal - with pupils from the poorest backgrounds the most likely to have been affected. 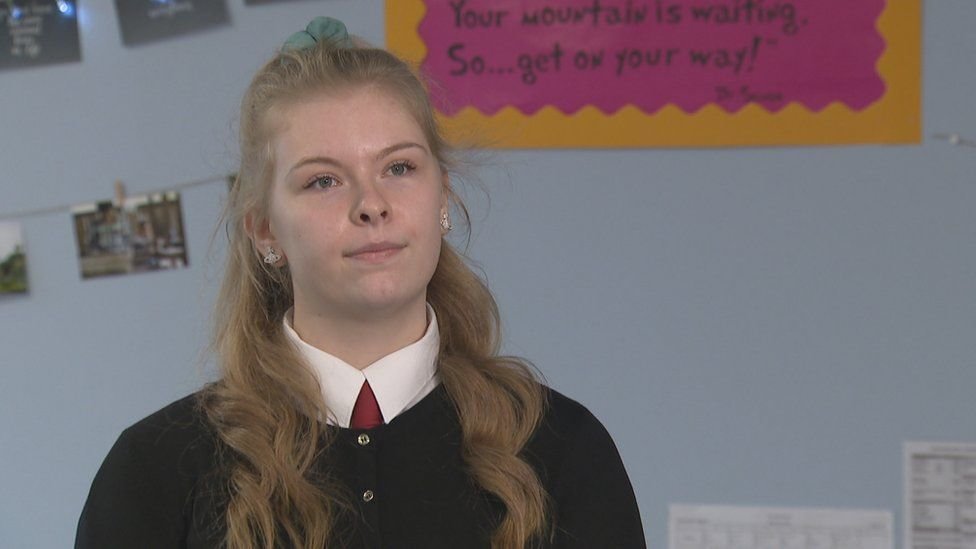 Mr Swinney added: "I am therefore announcing today that there will be no Higher or Advanced Higher exams in 2021.

"Instead we will adopt the new model that has been developed and base awards on teacher judgement of evidence of learner attainment.

"This is safe, it is fair, and it better recognises the reality of the disruption so many pupils have already had to their learning".

Mr Swinney also stressed that there would be no algorithms used to adjust the estimated grades put forward by teachers after controversy about their use in deciding this year's results.

Some pupils have told BBC Scotland that they were relieved the exams had been cancelled.

They included Carly, an S6 pupil at Govan High School in Glasgow, who is studying Advanced Higher History, Higher Modern Studies and Higher Care and is hoping to do nursing at university.

"I feel relieved that exams are cancelled and can make sure that I am getting everything done that I need to and not just working towards something that's not going to happen." 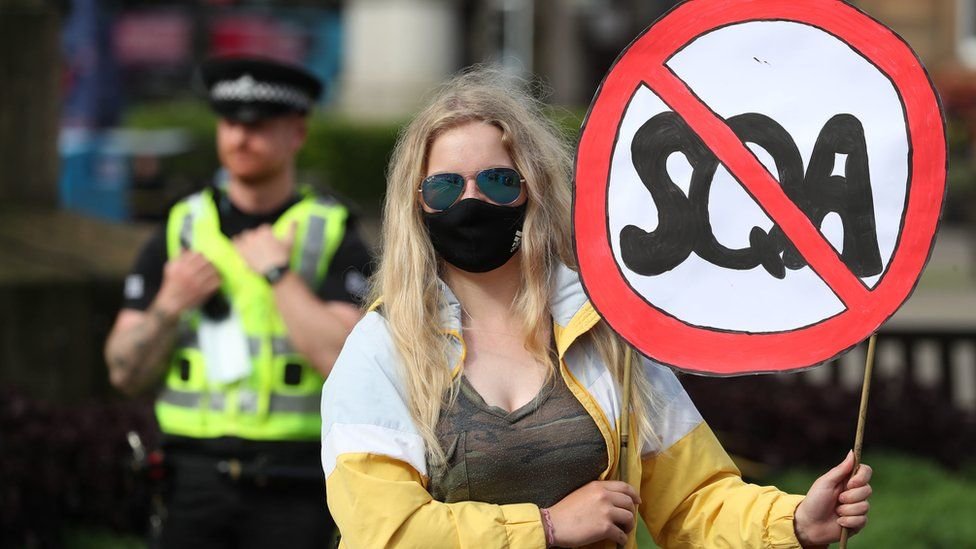 This year's exams were also cancelled due to the pandemic and lockdown, with the results initially decided using teacher estimated grades which the Scottish Qualifications Authority then moderated based on the past performance of different schools.

There was an outcry and protests took place after it emerged that 125,000 of those teacher estimates were downgraded, with claims the system was unfair to children at schools with worse records in exams.

The Scottish government then agreed to accept just the teacher estimates.

Opposition parties have regularly accused the education secretary of "dithering" over key decisions, which they said had left pupils, staff and parents in the dark. 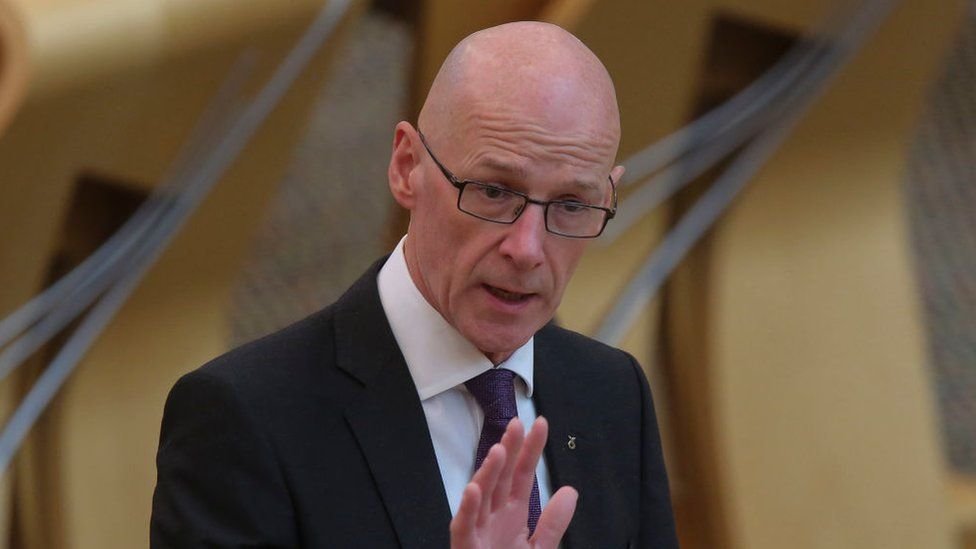 He added: "First it was the exams fiasco, then it was throwing the towel in over National 5 exams, and now he has dithered and delayed over Higher and Advanced Higher exams.

"By his own admission, the education secretary now accepts that it is our poorest students who have been deprived of their education this year.

"No wonder beleaguered teachers are writing in their droves to confirm they have completely lost confidence in John Swinney's abilities."

The group's Jo Bisset said: "The fact the Scottish government couldn't get its act together and run an exams diet tells you exactly how seriously the system takes children's interests in the short, medium and long term."

The announcement was welcomed by the EIS, Scotland's biggest teaching union, which described it as a "common-sense decision that is in the best interests of students."

But the union also warned that agreement needed to be reached on the "additional workload" that would be created for teachers by the alternative assessment programme.

What is happening elsewhere in the UK?

Wales has cancelled all GCSE and A-level exams in 2021. Welsh Education Minister Kirsty Williams said it was impossible to guarantee a level playing field for pupils due to the Covid pandemic. Grades will be decided using classroom assessments.

In England, A-levels and GCSEs are due to go ahead next summer, starting three weeks later than usual. Plans for how to manage them in a pandemic are expected to be published later this week.

Northern Ireland is planning to hold all exams in 2021, with its education minister, Peter Weir, saying they represented the "fairest way of judging students".

The decision to cancel Highers and Advanced Higher exams is not straightforward.

There are, of course, questions over the best way to ensure fairness towards students whose learning has been badly disrupted

The original plan was to delay Highers and Advanced Highers by a few weeks and give a greater choice of questions. The hope was this would make up for any disruption.

Many students have faced disruption. But could this disruption all have been anticipated when the original plan was announced two months ago?

One challenge now is to ensure the system for awarding grades is seen as credible and robust.

Nobody wants the real achievements of candidates questioned in future years because they didn't sit exams.

It is also worth noting that most new university students this year will not have sat exams since their National 5s in fourth year - and some may not have sat any at all.

Swinney: 'No Higher or Advanced Higher exams in 2021