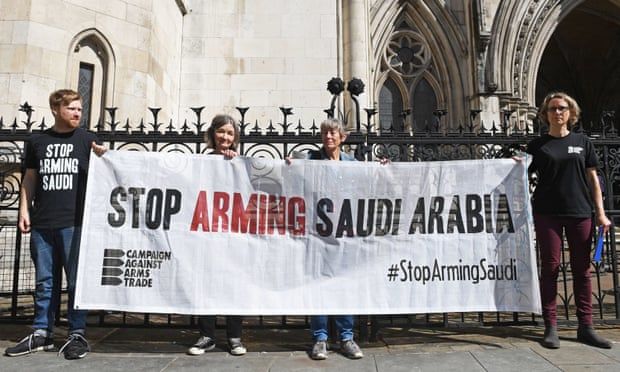 Anti-arms trade campaigners have been given permission to challenge in the high court the UK government’s decision to resume the sale of arms to Saudi Arabia that could be used in the war in Yemen.

Campaign Against Arms Trade (CAAT) won leave to seek a judicial review of a decision taken by international trade secretary, Liz Truss, last summer, which was followed by £1.4bn worth of arms exports soon after.

A full hearing will take place in a few months, renewing a legal battle between the campaign group and the British government that has previously resulted in UK arms sales to Saudi being halted pending a review.

UK arms export criteria say that if there is a “clear risk” that a weapon might be used in a serious violation of international humanitarian law (IHL) then an arms export should not be licensed – although in practice very few sales are halted.

The Saudi-led coalition that is fighting against Houthi rebels in Yemen is accused of engaging in indiscriminate bombing, which has contributed to 8,759 civilian deaths in the country according to the Yemen Data Project.

Sarah Waldron, of Campaign Against Arms Trade, said: “UK-made weapons have been central to a bombardment that has destroyed schools, hospitals and homes and created the worst humanitarian crisis in the world.”

Truss announced the resumption of full arms sales to Saudi last July, including bombs and missiles used by Typhoon jets part-made by Britain’s BAE Systems. An official review concluded there had been only “isolated incidents” of airstrikes in Yemen that breached humanitarian law.

Sales had been halted for a year after the UK court of appeal ruled that ministers had “made no concluded assessments of whether the Saudi-led coalition had committed violations of international humanitarian law”. By holding the review, Truss said sales could lawfully continue.

CAAT is arguing that it was wrong of Truss to conclude there were only isolated incidents of airstrikes, and its lawyers argue that related conclusions that there were only a “small number” of violations of international humanitarian law that did not form a pattern were irrational. 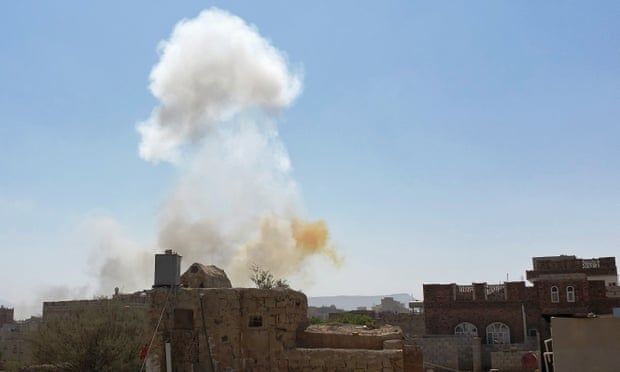 Smoke rises after Saudi-led airstrikes on an army base in Sanaa, Yemen.

Pressure has already been mounting on the UK after the Biden administration announced in February it would halt US sale of weapons to Saudi Arabia that could be used in offensive operations. In practice, this amounts to banning the sales of bombs and missiles used by aircraft and drones.

British officials have said previously that the UK takes its export responsibilities seriously. Ministers have to personally authorise the export of arms to Riyadh, with the international trade secretary formally taking advice from the foreign secretary.

Officials maintain a “tracker” – a substantial dossier documenting every airstrike where there is deemed to be a risk of civilian casualties or damage to civilian infrastructure – to help ministers decide whether arms exports can be approved.

A spokesperson for the Department for International Trade said: “We do not comment on ongoing legal proceedings.”