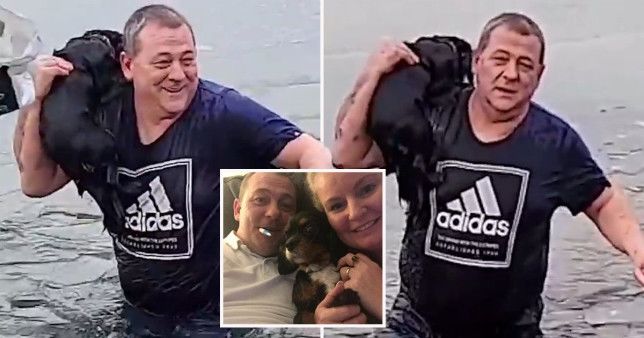 'Hero' dad jumps into frozen lake to save his dog

A ‘hero’ dad jumped into a frozen lake and waded through the ice to rescue his dog, who had scampered out and then fallen through.

Helen and Ste Cotton were out on their daily walk with their 11-year-old family pet, Trudy when she somehow made her way to the middle of the frozen lake at Walton Hall Park, Liverpool.

Trudy, a Cavalier King Charles Spaniel found herself in freezing cold water seconds later and was unable to pull herself out.

It was at that point owner, Ste, 48, jumped in the ice cold water to rescue his beloved family pet.

The incident, which was captured on camera by Helen’s daughter Emilia has been described as ‘hysterical’.

In the video, Ste, a former lifeguard, wearing only jeans and a T-shirt is seen carrying Trudy on his shoulder, to fits of laughter.

Ste’s wife Helen said: ‘Me and my husband go walking everyday as part of our daily exercise. Trudy has never ever gone near a lake so we were quite shocked.

‘Yesterday my daughter decided to join us with her dog and her dog kept going over and sniffing the lake and Trudy got interested.

‘She went over and had a sniff herself, realised it was hard so that she could walk on the ice and just ran off into the middle of the lake.

‘As you can imagine as soon as she got to the middle the ice just collapsed so she went in. She wasn’t big enough to break the ice to make her way back so she was stuck.’

Helen added: ‘It was the look of realisation on Ste’s face when he was going to have to go in. It was the funniest thing. He just looked as if to say ‘I’ve got to go in here’. 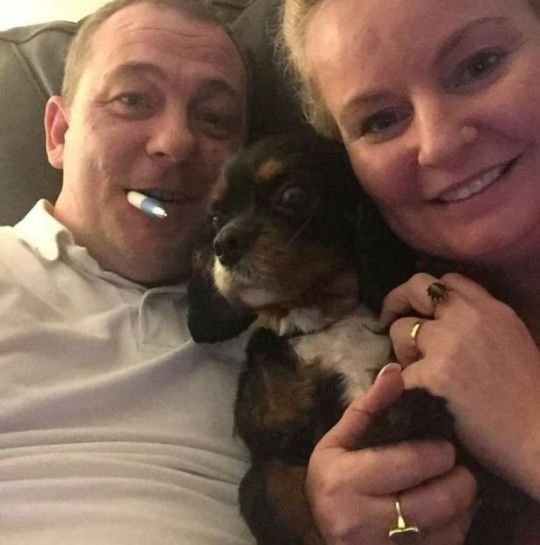 Helen and Ste Cotton with their dog Trudy, who is now safe at home

‘At the beginning, of course, there was cause for concern when she went in. We all got scared but Ste didn’t hesitate.

‘When he got hold of Trudy, that’s when we started laughing.. My daughter is quite a mischievous person anyway so as soon as she saw him going in, she grabbed the phone to film.

‘I was laughing with a nervous laugh but she was just hysterical but once he rescued her it was all fine and fun and games then.

‘There were quite a few people who gathered around and applauded him when he got out.’

Thankfully Trudy, who received a nice warm bath, is now back home with her family.