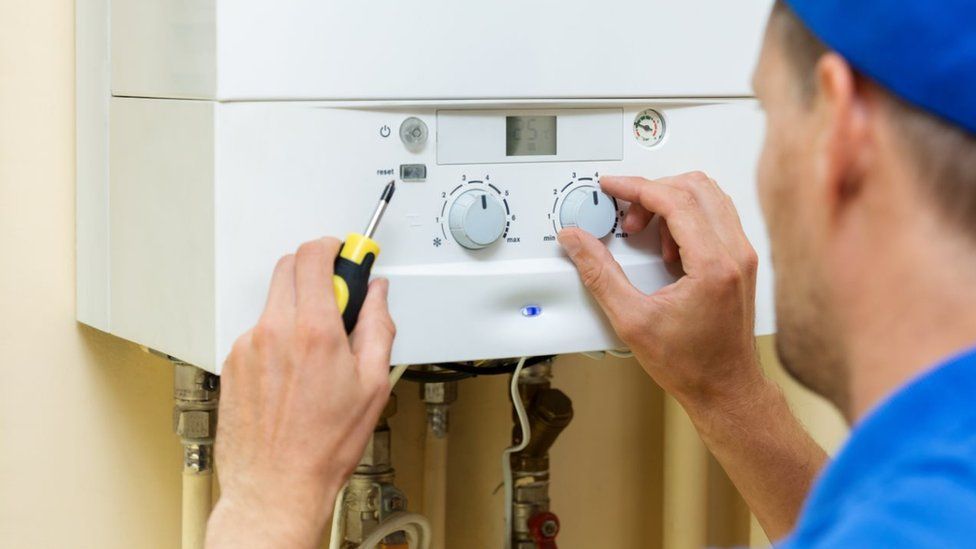 The grants are part of the government's strategy to reduce carbon emissions from heating homes and other buildings.

No new gas boilers will be sold after 2035, and there is £3.9bn of new funding to decarbonise heating, including in social housing.

But experts say the funding is too low and the plan not ambitious enough.

Heating buildings is a large contributor to the UK's overall greenhouse gas emissions, representing 21% of overall emissions, so there is pressure on the government's Heat and Buildings Strategy to deliver effective reductions.

It comes as the government prepares to outline its overarching strategy for how the UK will reduce its dependency on fossil fuels and achieve sharp reductions in emissions over the next couple of decades.

Business and Energy Secretary Kwasi Kwarteng said the grants to support the adoption of heat pumps, available from next April, would play a role in that, by helping to bring down the cost of the relatively new technology by 2030.

Currently an air source heat pump costs between £6,000 and £18,000, depending on the sort you install and the size of your home.

"As the technology improves and costs plummet over the next decade, we expect low-carbon heating systems will become the obvious, affordable choice for consumers," Mr Kwarteng said.

"Through our new grant scheme, we will ensure people are able to choose a more efficient alternative in the meantime."

While homeowners will be encouraged to switch to a heat pump or other low-carbon technology when their current boiler needs replacing, there is no requirement to remove boilers that are still working, the government emphasised.

What is a heat pump and how much will one cost me?

Heat pumps extract warmth from the air, the ground, or water - a bit like a fridge operating in reverse.

They are powered by electricity, so if you have a low-carbon source of electricity they provide greener heating.

One energy firm, Octopus Energy, said initially it expected homeowners would contribute around £2,500 to the cost of installing a heat pump, roughly equivalent to the cost of a new gas boiler. The government subsidy would cover the rest of the cost.

But many houses will require an upgrade to their energy efficiency, including insulation, before installing one.

The bulk of the £3.9bn funding will be invested in decarbonising public buildings, insulating and installing new heating systems in social housing and for those on low incomes, and helping to provide clean heating networks for homes that aren't suitable for heat pumps.

Funding spread over the next three years includes:

*  £450m for the scheme to subsidise heat pumps and other low-carbon systems in place of gas boilers,enough to subsidise a maximum of 90,000 boilers
*  £3.45bn to decarbonise buildings in England and Wales including social housing and district heating schemes
*  £60m to drive technological innovation to develop clean heating systems that are smaller, easier to install and cheaper to run. This money will come from a previously announced innovation fund.

"Sadly the government has stopped short of what's required to transform our housing into the clean, affordable, energy efficient homes that we all want and need to be living in," Greenpeace UK's climate campaigner, Caroline Jones, said.

Mike Childs, head of science at Friends of the Earth, said the scheme would only incentivise better off households.

"This is a start, it's just not a very good one when the many benefits of a really generous scheme are abundantly clear: from warm, healthy homes to slashed emissions, with jobs to boot," he said.

"The 90,000 heat pumps that this new scheme is expected to fund still falls well short of the 450,000 heat pumps the Climate Change Committee says need to be installed by 2025 in order to keep the UK on track to cut emissions from our homes in half by 2035," he said.

Independent climate think tank E3G said that setting the phase-out date for new fossil fuel boilers was "a world-leading achievement" and the pledge to reduce heat pump costs by 2030 was to be welcomed.

However, the funding was insufficient to achieve the government's goals on reducing emissions, programme leader Pedro Guertler said.

"On energy efficiency alone, public investment announced today falls £2bn short of what was pledged in the Conservative manifesto to 2025," he said.

In all there would need to be a further £9.75bn invested over the next three years, he said, to meet ambitious commitments on reducing emissions.

"It's challenging, but necessary, achievable and a great investment for people, jobs, skills and manufacturing," he added.

The Liberal Democrats described the heating plan as "a kick in the teeth for families across the country facing soaring energy bills this winter."

It's another piece in the Boris Johnson climate-calming jigsaw.

First, he slots in a world-leading policy halting the sale of petrol cars by 2030.

Now he lays down another piece - a ban on gas boilers by 2035. It's another trend-setting initiative that other nations will surely follow.

There's a problem, though. Because by that date in the middle of the next decade the PM has already pledged to cut emissions overall by 78% over 1990 levels.

Energy experts say that simply won't happen unless he provides much wider incentives for people to insulate their homes and to buy heat pumps to replace their gas boilers.

One group of researchers estimates that to meet his net zero targets he needs to invest nearly another £10bn over three years.

They hope the Chancellor will fill that piece of the jigsaw in his spending review next week.

The Confederation of British Industry, representing larger UK businesses said the strategy would help members prepare for the changes ahead.

Matthew Fell, CBI chief policy director, said it provided "a golden opportunity for both the public and private sector to pick up the pace of progress to net zero".

But he called for "a clear delivery plan for consumers, businesses and local authorities".

Chief Executive of ScottishPower Keith Anderson said it would kick-start demand for electric heating, "allowing the industry to accelerate the delivery of electrification and quickly bring down upfront costs."

And Phil Hurley, Chair of the Heat Pump Association, said it would give the industry a confidence boost - allowing it to scale up and retrain in preparation for the "mass rollout of heat pumps".

However, Joanne Wade, from the Association for Decentralised Energy, said she was disappointed that there was "nothing about further supply chain support to build skills and de-risk market entry for smaller firms".