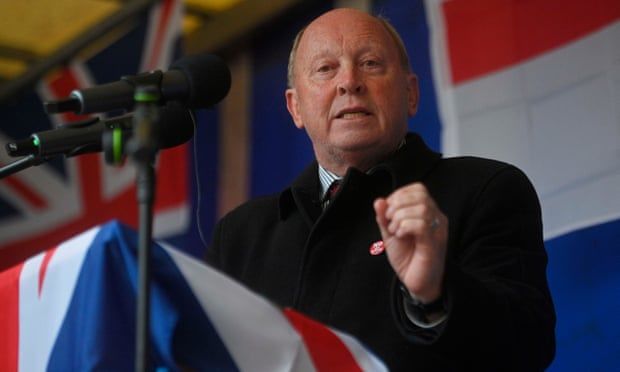 Traditional Unionist Voice leader’s pressuring of DUP emulates Ukip strategy of pushing militant agenda
He is an outspoken political maverick who has upended British politics by yanking a mainstream party towards a radical position that has reverberated across Europe. But his name is not Nigel Farage.

Jim Allister is leader of the Traditional Unionist Voice, a one-man band with a simple message that has ensnared Northern Ireland’s Democratic Unionist party (DUP) and by extension the UK government and European Commission.

Few outside Northern Ireland have heard of him but Allister has emulated the Ukip strategy of harnessing elements of a dominant party to push a militant agenda. The results were on display on Monday when Boris Johnson flew into Belfast to try to defuse a crisis that has collapsed the devolved government and escalated the row between Downing Street and Brussels over the Northern Ireland protocol.

The spectacle of the prime minister trying to revive the Stormont assembly and renegotiate a Brexit deal he had once declared “oven-ready” was, depending on perspective, a tribute to or an indictment of Allister.

The 69-year-old barrister and North Antrim legislative assembly member has forcefully denounced the protocol from its inception in 2019 and tugged the DUP in his wake, culminating in its decision last week to block the formation of an assembly and executive at Stormont.

“His implacable opposition to the protocol has been important in moving the DUP’s position from moderate opposition to the current position where they refuse to go into the assembly,” said Duncan Morrow, an Ulster University politics professor. “Jim is very unique. He reaches certain elements of the DUP’s own coalition so they’re always very nervous about him.”

To critics Allister is a dinosaur who whips up Protestant anxieties and undermines reconciliation with claims that Northern Ireland risks sliding out of the UK into a united Ireland beholden to the IRA.

To supporters he is a leader of vision and integrity who sounded the alarm on genuine constitutional peril. “We’re under control by Europe. We feel we’re no longer part of the UK,” said Sam Little, a dairy farmer who attended a recent anti-protocol rally.

Even detractors concede Allister’s gravel-voiced eloquence tilted a debate about trade rules into an existential challenge for unionism. On rally platforms and on radio shows he rammed home the message that post-Brexit checks on goods entering Northern Ireland from Great Britain were a “dagger” into the heart of the union.

“He drilled into the constitutional question about Brussels setting regulations in the future,” said Peter Shirlow, director at the University of Liverpool’s Institute of Irish Studies. “He’s the man who finds the raw nerve and when he finds it he pokes it.”

Allister joined the DUP in 1971 but broke with Ian Paisley over an electoral pact with other unionists in 1987. He rejoined the DUP and was elected an MEP but quit the party again when Paisley entered government with Sinn Féin in 2007. With all the main parties co-opted into power sharing Allister has often been a lone opposition voice at Stormont. He did not respond to an interview request for this article.

The DUP leader, Sir Jeffrey Donaldson, might have sold a concession on the protocol last year to his party were it not for Allister shouting from the sidelines, said Shirlow. “He’s like Farage in that sense, very good at that simple messaging.”

When the TUV soared in opinion polls, siphoning support from the DUP, the Democratic Unionists took fright and hardened their position, at the cost of alienating moderates. The party collapsed the power-sharing executive in January and said it would not form another one without major changes to the protocol.

Despite this attempt to steal TUV thunder, Allister’s party still won 7.6% of the first preference vote in the assembly election. A quirk of the voting system meant Allister was the only member of the TUV to win a seat – in contrast to the Alliance party, which won 17 seats with 13.5% of first preferences. The DUP remained focused on its rightwing rival, said one party insider. “That’s where the energy in unionism is.”
#Boris Johnson  #Nigel Farage  #Johnson
Add Comment