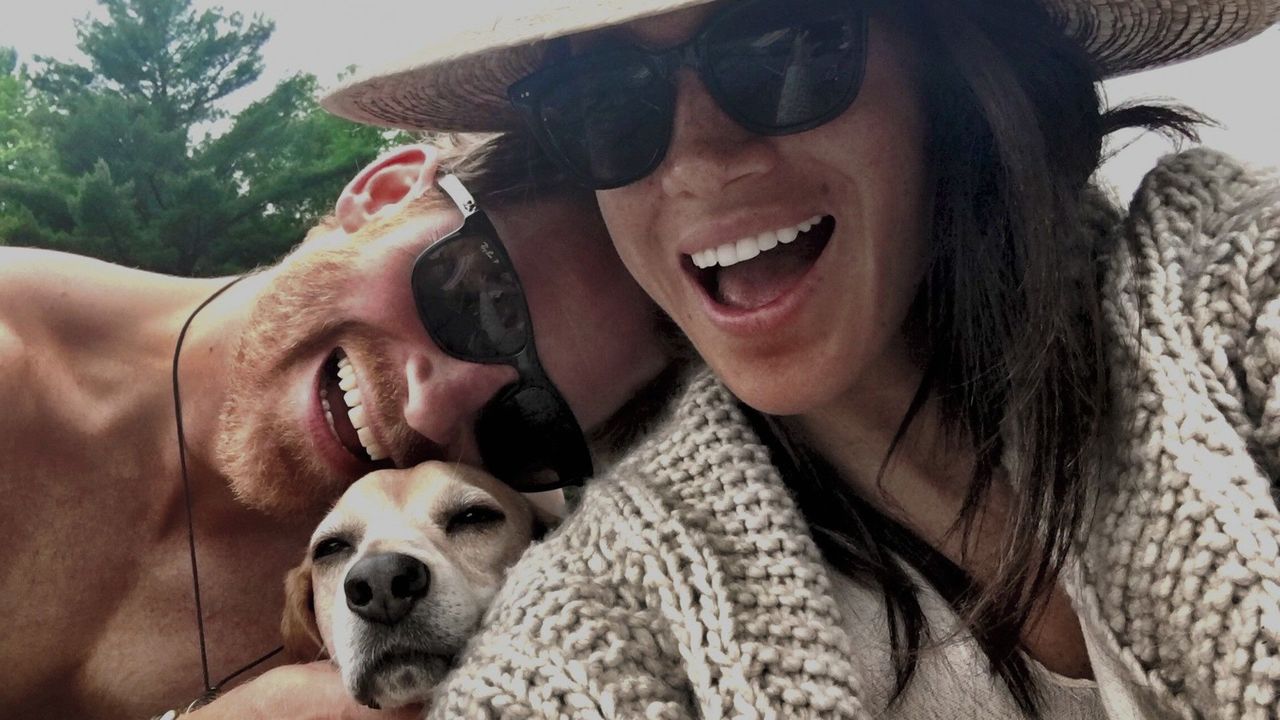 Harry said some members of the family felt negative treatment in the media was "a rite of passage" - but he added: "The difference is the race element."

The first three episodes of the six-part bombshell series, titled Harry & Meghan, were released on Thursday.

The couple talk about life in the Royal Family, press intrusion and racism.

Buckingham Palace has not yet responded to the claims.

At the start of episode one, a message says members of the Royal Family declined to comment on "the content within this series".

Both Kensington Palace and Buckingham Palace confirmed they received an email purporting to be from a production company from an unknown organisation's address and attempted to verify its authenticity with Archewell Productions and Netflix, but did not receive a response, PA reported.

A source told PA the substance of the email did not address the entire series.

The episodes released on Thursday - which include sit-down interviews with the couple and their friends, as well as a video diary - cover a range of topics, including the couple's difficult relationship with the tabloid press, and the Royal Family's response to racist news articles written about Meghan.

"The direction from the Palace was don't say anything," says Harry. "But what people need to understand is, as far as a lot of the family were concerned, everything that she was being put through, they had been put through as well.

"So it was almost like a rite of passage, and some of the members of the family were like 'my wife had to go through that, so why should your girlfriend be treated any differently? Why should you get special treatment? Why should she be protected?"'

"I said 'the difference here is the race element'."

He says there is a "huge level of unconscious bias" in the Royal Family, adding: "It is actually no one's fault. But once it has been pointed out, or identified within yourself you then need to make it right."

The Duke of Sussex - who is fifth in line to the throne - says he is really proud that his children are mixed race, and it makes him want to "make the world a better place for them".

"But, equally, what's most important for the two of us is to make sure that we don't repeat the same mistakes that perhaps our parents made."

The couple also spoke about meeting other royals, with Meghan saying she found it surprising that the formality "carries over" even when not in public.

She says: "When Will and Kate came over, and I met her for the first time, they came over for dinner, I remember I was in ripped jeans and I was barefoot. I was a hugger. I've always been a hugger, I didn't realise that that is really jarring for a lot of Brits.

"I guess I started to understand very quickly that the formality on the outside carried through on the inside."

In much of episode one, the duke and duchess spoke about their relationship - including how they met via a friend on Instagram and met for drinks in London's Soho for their first date.

Harry describes it as a "great love story", adding: "I think for so many people in the family, especially obviously the men, there can be a temptation or an urge to marry someone who would fit in the mould, as opposed to somebody who you are perhaps destined to be with.

"The difference between making decisions with your head, or your heart. And my mum certainly made most of her decisions - if not all of them - from her heart. And I am my mother's son."

He adds: "She (Meghan) sacrificed everything she ever knew, the freedom that she had, to join me in my world. And then pretty soon after that I ended up sacrificing everything that I know to join her in her world."

Prince Harry tells the docuseries: "My job is to keep my family safe. But the nature of being born into this position... and the level of hate that is being stirred up in the last three years especially against my wife and my son, I'm generally concerned for the safety of my family."

The duke adds that, as a royal, it is his "duty to uncover this exploitation and bribery that happens within our media".

Meghan, meanwhile, says she felt that "no matter how hard I tried, no matter how good I was, no matter what I did, they [the media] were still going to find a way to destroy me".

In other moments from the series:

*  Harry calls the press pack of royal correspondents "essentially an extended PR arm of the Royal Family. An agreement that has been there for over 30 years". He says he believes the media see his trauma as its "narrative to control"


*  In episode three, Meghan calls the time around their engagement an "orchestrated reality show"


*  Harry says his family were "incredibly impressed" with Meghan when they first met her. "But the fact that I was dating an American actress was probably what clouded their judgment more than anything else at the beginning"


*  And although Princess Diana's Panorama interview was secured under deceit, Harry says his mother "spoke the truth of her experience"


*  The duchess's mother, oria Ragland, says she warned Meghan that the harassment was "about race". "I said, you may not want to hear it but this is what's coming down the pike," says Ms Ragland. "As a parent, in hindsight absolutely I would like to go back and have that kind of real conversation about how the world sees you"

Meghan describes a BBC interview that took place as part the announcement of her and Prince Harry's engagement as an "orchestrated reality show", adding: "We weren't allowed to tell our story... it was, you know, rehearsed."

The interview was conducted by news presenter Mishal Husain, who said on Thursday she remembers the "discreet" and "very small scale" interview for its atmosphere of infectious joy.

"I don't know what kinds of conversations went on between them and their team ahead of the day," she says. "I can speak to my recollection of that day and that was two people who were happy to be talking about each other."

The couple were "happy to be sharing their love" and "full of plans for the future and what they could do as a team", she says, adding that their sense of excitement about what the future held "was very infectious".

The eagerly-anticipated docuseries - which will culminate in its final three episodes at 08:00 GMT on 15 December - faced controversy earlier this week when two trailers allegedly appeared to use footage and photos in misleading ways.

The trailers showed archive clips and pictures as Prince Harry and Meghan spoke about being sidelined by the Royal Family and hounded by the media - but it is thought at least three such images were taken from events that had nothing to do with the couple. Netflix and the Sussexes' production company Archewell have not commented.

On Tuesday, Prince Harry and Meghan faced awkward questions from reporters including "are you putting money before family?" and "are you harming your family, Harry?" as they attended a New York event to receive a human rights award. 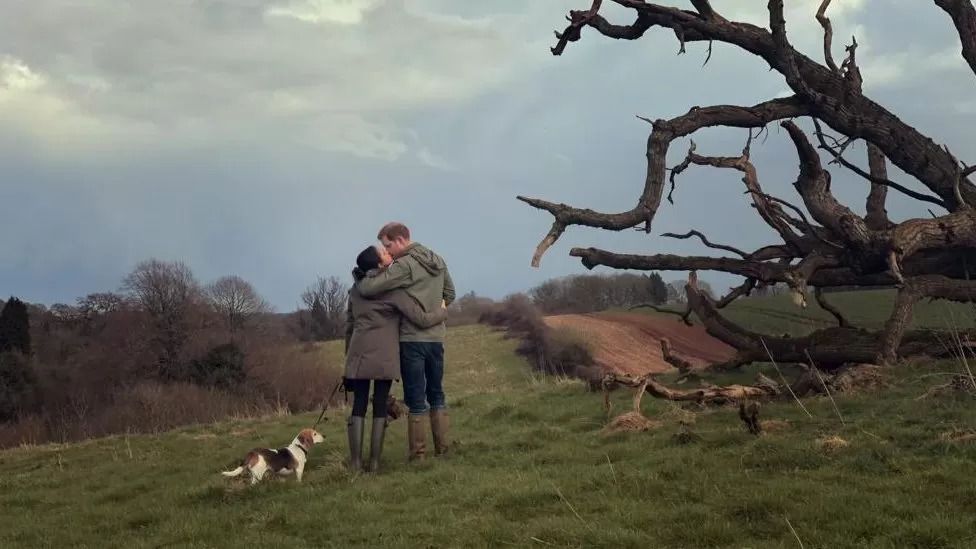 The royal couple stepped back as senior royals in March 2020 and now live in California with their two young children, Archie and Lilibet.

Since their exit, they have given several interviews about life in the Royal Family - including their famous Oprah interview last year when they accused an unnamed member of the family of racism, and Meghan said she had had suicidal thoughts.

The couple have also spoken about their relationship with the media - blaming racist coverage in the tabloid press as a reason why they decided to step back as senior royals.

They have gone on to secure interviews, produce podcasts and carry out campaigning work. In January, Prince Harry's memoir - called Spare - will be published.

WATCH: A clip from the first episode of the Harry and Meghan Netflix series

Home video of Archie features in Harry and Meghan documentary