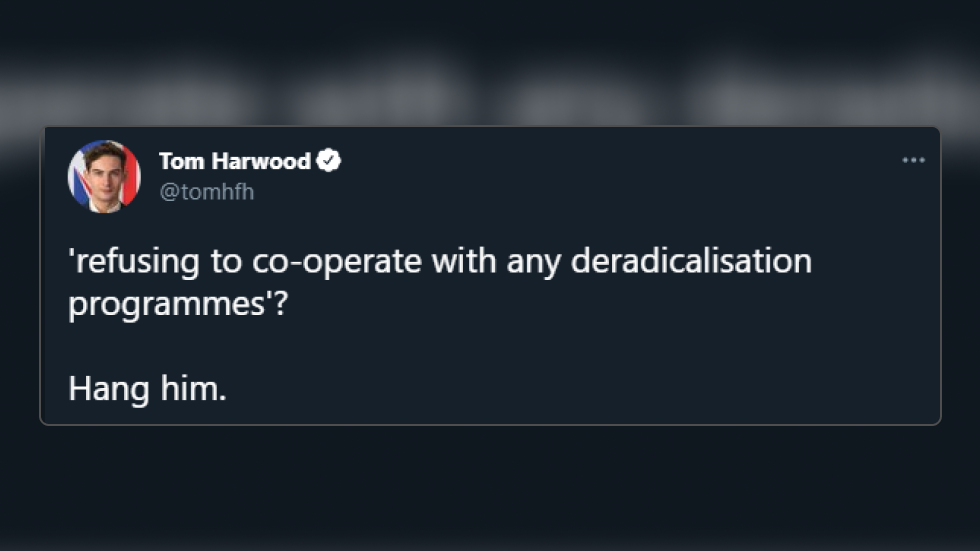 A GB News presenter’s controversial call to hang the imprisoned Manchester Arena bomb plotter has sparked debate on social media, with many telling the TV host to reconsider his “medieval opinion.”

On Wednesday, ITV News reported that Manchester Arena bomb plotter Hashem Abedi was refusing to cooperate with deradicalisation programmes at HMP Frankland, where he has been imprisoned for his part in the atrocity which killed 23 and injured over a thousand at an Ariana Grande concert.

The news about Abedi clearly touched a nerve with some, including GB News political correspondent and presenter Tom Hardwood, who was hammering away at his keyboard just moments after the story hit Twitter.

Citing part of the report which stated the bomb plotter was not cooperating with deradicalisation programmes, the GB News presenter wrote “hang him,” in a tweet which has garnered much attention.

Many people were quick to condemn the young presenter for his “bizarre and medieval opinion” with others claiming that “we’re better than that” in the UK.

“I think we've moved on from the death penalty,” another person wrote while writer and journalist Benjamin Cook asked Harwood, “Is that your answer to everything?”

Cook’s question prompted a response from Harwood, who said he was normally against the death penalty but noted: “In the case of people who we *know* committed mass murder - & are unrepentant about it - it's hard to argue against.”

The debate between Cook and Harwood continued, with the latter noting that British security forces regularly shoot terrorists when they’re posing a threat in the real world and suggesting such a fate for Abedi wouldn’t be morally different.

Others backed up the GB News anchor completely, suggesting that they would not normally support capital punishment, but in this case, it was okay.

Even Tory peer Baroness Jacqueline Foster shared her two cents; stopping short of condoning Harwood’s call for hanging, Foster said “He should never be released!” adding that “We have become far too soft on ‘terrorism’ threats / actions in this country .. time to wake up !!”

In August 2020, Abedi was given 24 life sentences with a minimum of 55 years before he can be considered for parole. His brother Salman died committing the terrorist attack on May 22, 2017. Hashem was arrested in Libya the day after the bombing that devastated Manchester.