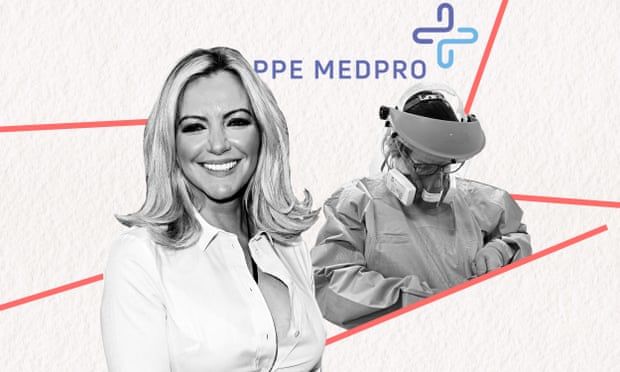 PPE Medpro, which is linked to Michelle Mone, appears to have made huge profit on 25m gowns that were never used by NHS

PPE the government bought for £122m from a company linked to the Tory peer Michelle Mone was purchased from the Chinese manufacturer for just £46m.

The extraordinary profits apparently made by PPE Medpro and its partners in the supply chain are revealed in documents leaked to the Guardian, including contracts and an inspection report for sterile surgical gowns supplied by the firm.

Despite being bought at the start of the pandemic and delivered in 2020, the 25m gowns were never used by the NHS after government officials rejected them following an inspection.

The Department of Health and Social Care (DHSC) has for months been seeking to recover money from PPE Medpro through a mediation process. The firm claims it is entitled to keep the money, arguing that DHSC “agents” approved the gowns after inspection.

PPE Medpro’s contract to supply 25m sterile surgical gowns was one of two awarded to the company after it was processed through a government “VIP lane” for politically connected companies.

The company was first entered into the government’s high-priority lane after Mone contacted two cabinet ministers – Michael Gove and Theodore Agnew – in May 2020 to say that PPE could be sourced from “my team in Hong Kong”.

Documents leaked to the Guardian shed light on the production of the gowns by a company in China, Wujiang Tutaike Textile and Finishing Co Ltd, as well as the apparent cost price paid.

Two contracts entered into by PPE Medpro’s supply chain intermediaries with the Wujiang company suggest it supplied all 25m gowns. The total price paid was $60.35m, which at the time equated to approximately £46m.

That suggests that PPE Medpro and three intermediary companies shared as much as £76m in profits – perhaps less shipping and other logistics costs.

A spokesperson for PPE Medpro argued the company saved the government money, given the prices it was paying for PPE at the time.

“The supply chain was significant, involving the sourcing team, manufacturers, sterilisation plants, packaging, quality assurance teams, logistics, finance and much more,” they said. “This global team of people and companies worked around the clock 24/7 to deliver PPE to the frontline to save lives.”

In January, the Guardian revealed that a tranche of leaked files appear to show both Mone and her husband, the Isle of Man financier Douglas Barrowman, were secretly involved in PPE Medpro’s business. The leak included WhatsApp messages from June 2020 in which Mone, texting from a private jet, appears to be discussing the required sizes of the gowns, and details regarding the DHSC’s purchase order or “PO” process.

Lawyers representing Mone said the Guardian’s reporting was “grounded entirely on supposition and speculation and not based on accuracy”. They have repeatedly said she “was not connected to PPE Medpro in any capacity”, had no “association” with the company and “never had any role or function” in the process by which contracts were awarded to the firm.

Lawyers for Barrowman have also distanced him from PPE Medpro, but they have not denied that he benefited financially from the company’s business.

The House of Lords commissioner for standards, Martin Jelley, is investigating whether Mone should have registered an interest in the company or whether she broke lobbying rules. Mone denies any rule-breaking and said: “I was asked to help at a time of national emergency.” Her lawyer said Mone would not answer questions about the gowns because “she has no involvement in the business”.

A lawyer for PPE Medpro indicated that the company believes it is entitled to keep the money paid for the unused gowns, on the basis that it did fulfil the contract. They said: “The gowns were fully inspected by DHSC agents and only when they were satisfied that the contractual requirements had been met was payment sent to PPE Medpro. Payment was sent in full, clearly signifying complete satisfaction with the inspection process.”

That inspection appears to have taken place in China, before the gowns were then transported to the UK. The Guardian has seen a leaked 20-page report of an internal supply chain inspection apparently carried out before that, in late August, at a factory in China’s Jiangsu province.

It contains photos from inside the factory showing workers in casual clothes at sewing machines beside large piles of blue gowns, some trailing on the floor. The packing area is cramped and dimly lit.

Photographs show that PPE Medpro’s gowns were packed into boxes at the factory with “sterile surgical gown” printed on the side in capital letters. Each gown was also wrapped in a clear plastic bag, with labels inserted inside.

The labels in the inspection report bear PPE Medpro’s name and logo, technical specifications and instructions for use for the “sterile surgical gowns”. However, they do not display a certification number from a “notified body” such as the British Standards Institute (BSI) that would usually be expected to confirm surgical gowns were sterile in accordance with regulations.

A lawyer for PPE Medpro did not dispute that no notified body had certified the gowns as sterile, but suggested that was not required because the gowns had been approved under “an equivalent technical solution” that meant that “the normal rules do not apply”. 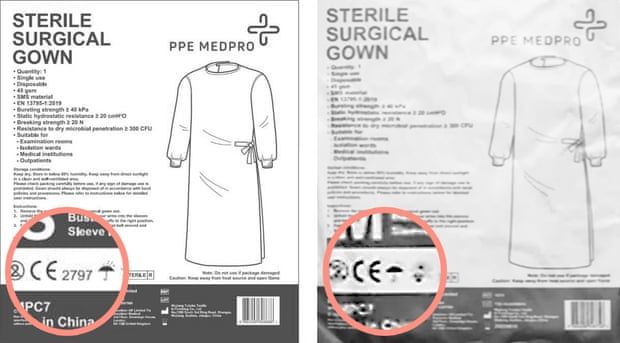 They suggested PPE Medpro was exempted from standard rules because its products were supplied under “very specifically and precisely agreed processes” and “in accordance with the annexures to the contract”.

The Guardian has also been leaked what appears to be a draft label for PPE Medpro’s gowns that did include a BSI number. It is not known when the label was designed or by whom, and it does not appear to have been used as the final label.

It looks largely identical to the final label seen in the leaked inspection report, except for the display of the number – 2797 – which is the official identification mark for BSI’s Netherlands office.

A spokesperson for BSI said that it had never authorised PPE Medpro to use that certification number and had now reported the incident to the Netherlands regulator, the Health and Youth Care Inspectorate (IGJ): “We can confirm that PPE Medpro is not a client of BSI. We have reported the misuse of our notified body number to IGJ.”

PPE Medpro did not respond directly to questions from the Guardian about when the label was designed, what its purpose was, whether it was ever shown to the DHSC, and why it apparently displayed an unauthorised BSI number. The firm’s lawyer said it denied any wrongdoing.

The lawyer added that the DHSC had required all sterilisation documents prior to shipping, and the gowns were collected from a sterilisation plant it had approved.

When the gowns were finally delivered to a PPE depot in Daventry, they were inspected by officials from both the DHSC and the Medicines and Healthcare products Regulatory Agency (MHRA).

The DHSC declined to explain why the gowns were rejected, while the mediation over its dispute with PPE Medpro is continuing. An MHRA spokesperson said: “They did not enter the supply chain after a range of checks by the MHRA and DHSC, which also showed that they were not double-wrapped.”