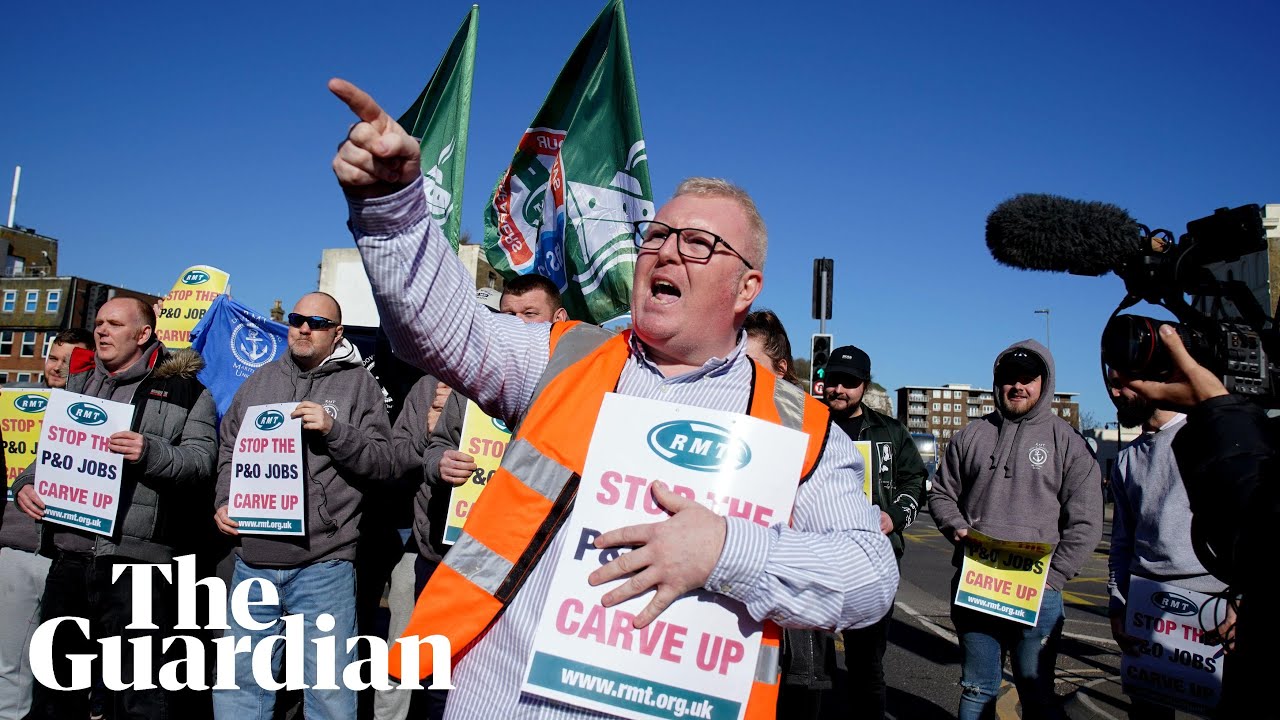 Government knew of P&O Ferries sackings the day before, No 10 admits

Labour and unions demand immediate action including suspending licences of parent company DP World
Unions and the Labour party have demanded immediate action over the sacking of 800 British crew by P&O Ferries, including suspending the licences of its parent company, DP World, as it emerged the government was made aware of the move the previous night.

Amid public calls for a boycott of P&O and protests at ports, unions demanded the government urge the firm to reverse its decision, and curb DP World’s involvement in planned freeports.

The shadow transport secretary, Louise Haigh, said: “This was a despicable assault on workers’ rights. But British seafarers do not need meaningless platitudes – they need action.”

She has written to the prime minister proposing the government should claw back taxpayers’ money claimed by DP World, including £10m in furlough payments; suspend its licences to operate until the situation is resolved; and remove it from the government’s transport advisory group.

“The government must now stand up for loyal workers in Britain being undermined by overseas billionaires,” she said. Labour would also like the government to legislate to outlaw “fire and rehire”.

The defence minister, James Heappey, said on Friday morning that it would be “the right thing to do” for P&O to hand back £10m in furlough money, calling the company’s behaviour “disgraceful”.

He told Sky News: “It certainly feels to me that it would be the right thing to do for P&O to hand that money back, and I am sure that colleagues at the Treasury and Department for Transport will be looking into it. It’s absolutely disgraceful behaviour by P&O.”

Sources at the DfT said it was made aware of the impending mass sackings and suspension of ferry services on Wednesday night.

Boris Johnson’s official spokesperson had said on Thursday: “We weren’t given any notice to this.”

He confirmed on Friday that senior officials at the DfT had first been informed about the firm’s plan on Wednesday evening but had kept the information within a small group, because of concerns about commercial sensitivity.

The spokesperson said ministers were investigating whether P&O Ferries broke the law, describing the firm’s behaviour as “extreme”.

“We expect companies to treat their employees fairly. It is only in extreme circumstances that employers need to make extreme decisions to secure the future of their businesses if all other avenues have failed, including negotiations between employer and employees.

“We don’t believe this was the case for P&O staff,” he said, adding: “We are looking into this very carefully.”

He also said he did not think P&O was discussed when Johnson visited the United Arab Emirates on Wednesday. DP World is owned by the government of the UAE.

The RMT union’s general secretary, Mick Lynch, said: “The fact that the government knew the day before that a foreign owned company planned to cause major disruption to UK ports but did nothing to prevent it is shocking.”

He said the union had “been overwhelmed by the widespread public and political support”, adding: “But there is still time to reverse this shameful decision and today we are presenting a plan of action which needs to be acted upon immediately and if necessary, the government should introduce enabling legislation to make it happen.”

The RMT has called for a suspension of contracts with P&O and for DP World’s freeport interests in the UK.

The boss of the maritime union Nautilus called the mass sacking “a new low”, as he prepared to join protesters at Dover.

Mark Dickinson, the general secretary of Nautilus International, said demonstrations were also planned in Hull and Liverpool on Friday.

“It is a dark day for the shipping industry. I have been in this industry for over 40 years and I’ve seen some curve balls and shocking developments, but this is a new low for a shipping company – to treat due legal process in such an underhand and callous way has shocked me, it has taken my breath away,” he told BBC Radio 4’s Today programme.

Beth Hale, an employment lawyer at CM Murray, said P&O’s actions were “almost certainly” not within the rules and could potentially mean directors are criminally liable.

“What they ought to have been doing is consulting with staff, consulting with the unions about potential dismissals, considering whether there were any suitable alternative roles, going through the processes,” she told Today.

“They also ought to have made a formal notification to the government, about the proposed dismissals – when there are dismissals in these numbers that’s a legal obligation and so there is potential criminal liability for directors as well, so it’s potentially an enormous breach.”

Dickinson said Nautilus and RMT were “actively progressing” legal action over the move on Thursday by loss-making P&O Ferries to sack staff, halt services and look to bring in cheaper agency crew to run its vessels.

“It is clearly illegal,” he said. “The company is duty-bound to consult with trade unions. We have have collective bargaining agreements for all the affected seafarers, for all the vessels on all the routes. We are actively progressing that.”

Dickinson said the UK’s Maritime and Coastguard Agency would have to be “absolutely clear and confident” that the cheaper agency could do the job safely.

“They are unfamiliar with the vessels, the routes, the berths. Crossing the English channel – the busiest shipping lane in the world – is like walking across a six-lane motorway at rush-hour,” he said. “This is an intensely worrying situation.”
#Boris Johnson  #Johnson
Add Comment