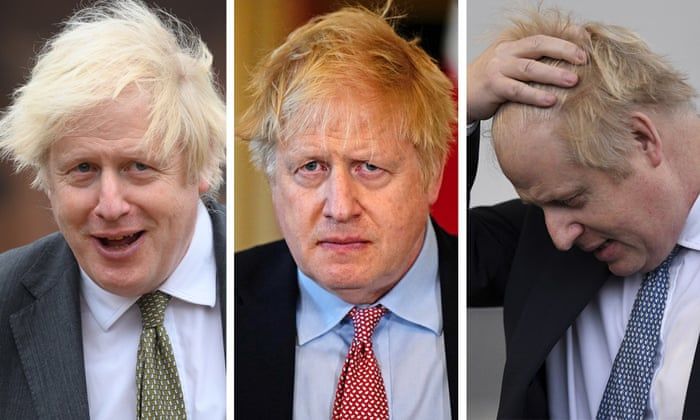 Good, bad and the ugly: how Boris Johnson’s future may play out

Boris Johnson is reputedly a politician with a Lazarus-like ability to overcome perpetual scandal, charm his critics and survive bruising stories that would sink his rivals. But how may this most serious misdeed of his political career ultimately play out?

The most perfect scenario for Johnson is that the only fixed-penalty notice he receives for Partygate is the one for a short birthday gathering – one that Tory whips and spinners have tried to portray as an overly punitive approach by the Met police.

Even for a politician with as much luck as Johnson, that would seem far-fetched, given at least three of the most overt apparent breaches are yet to be investigated. But once MPs have accepted a law-breaking PM once, it is easier to do it again, a fact the Welsh secretary, Simon Hart, made explicit on Thursday morning.

If Johnson can get through a week of parliamentary outrage and convince MPs he was unclear about the nature of the gatherings because they took place in the workplace that is also his home, he may wriggle out of claims he misled parliament. He could also dodge damage from Sue Gray’s final report if it does not reveal substantially more than the media coverage – MPs will see it as old news.

Tory MPs are already uneasy about deposing a prime minister in the midst of the barbaric scenes in Ukraine and a further escalatory attack by Russia would also make them more nervous about moving against Johnson.

“If Russia uses chemical weapons when we are in the midst of a contest, who will provide the leadership to make some incredibly important choices?” one MP said. “That’s what keeps me awake at night over this.”

The Conservatives may also do better in the local elections than expected because the bar is low. Labour already holds a great deal of the seats up for grabs this time and may not be able to hail masses of gains. There are some councils too where the Tories say they are optimistic they can make gains – notably Sunderland, which would have symbolic “red wall” significance. A huge boost would be a win for the Tories in the Wakefield byelection, which Labour are widely expected to win.

Should Johnson survive beyond those polls, it is easy to see him cruising to Tory conference and on to the next election.

It is widely expected in Downing Street that the prime minister will receive at least three more fines – perhaps as many as six in total. With each disclosure, increasing numbers of Conservative MPs could reach their limit and call for the prime minister to go.

But even the most hardened rebel MPs admit there is some way to go before 54 letters are reached – the threshold for Sir Graham Brady to call a vote of no confidence in the PM in his capacity as chair of the backbench 1922 Committee.

With a slow pace of disclosures from the Met police, those letters could remain a trickle rather than a flood. Just two MPs – Nigel Mills and Craig Whittaker – added their names to those calling for Johnson’s resignation after he was fined and only Mills said he would submit a letter. And at least two have been withdrawn, from Andrew Bridgen and Douglas Ross.

At the local elections, with still no sign of the Gray report, the Tories may still suffer losses but do just enough to be able to spin the story of the night as Labour’s failure to make enough gains. Equally, Labour could win Wakefield but only with a small swing on a low turnout.

Though that might be frustrating for Labour in the short term, this kind of scenario – described by one Tory official as a “long slow death march” – may arguably most benefit Labour in the longer term – a prime minister dogged by scandal but with internal opponents too weak to replace him.

One of the people who held Johnson’s fate in his hands this week was Rishi Sunak – who could have resigned after receiving his own fixed-penalty notice and denounced the chaos of Johnson’s administration.

After his own month of difficult headlines, the chancellor opted to stay put. But any further pressure on Sunak could push him to his limit – especially amid rumours Johnson intends to demote him on the advice of the strategist Lynton Crosby. His departure could trigger further resignations from other uneasy junior ministers.

No 10 sources believe Johnson could be hit with fines for six separate events, with an embarrassing racking up of costs.

The final release of the Gray report may also mean egregious personal lockdown breaches by the PM come to light for the first time – or evidence that he agreed to events being held in advance, which would suggest he lied about perceiving them as work events. It could also potentially force the resignation of senior officials – perhaps his cabinet secretary, Simon Case.

Johnson may also face a bruising time in parliament in the coming weeks. The Speaker, Sir Lindsay Hoyle, is expected to allow a vote of MPs on an investigation into whether Johnson misled the House of Commons – and they could vote to hand an investigation to the privileges committee. Any significant rebellion by Tories could be hugely damaging – and prompt more letters of no confidence.

The Conservatives could then suffer a set of shock local election results, perhaps losing totemic London councils such as Wandsworth or Westminster. Coupled with a sharp drop in the national polls, that could be enough to force a larger contingent of MPs from the party’s One Nation group to move against Johnson, enough to trigger a vote of no confidence. Labour could win Wakefield with a big swing, enough to unnerve “red wall” backbenchers to help depose him.

Ultimately the decider in a vote will be how safe Tories believe their seats will be under Johnson. If they conclude a successor would have a better chance of retaining them, some MPs have suggested more than half of backbenchers and even a third of the ministerial payroll could vote against Johnson.