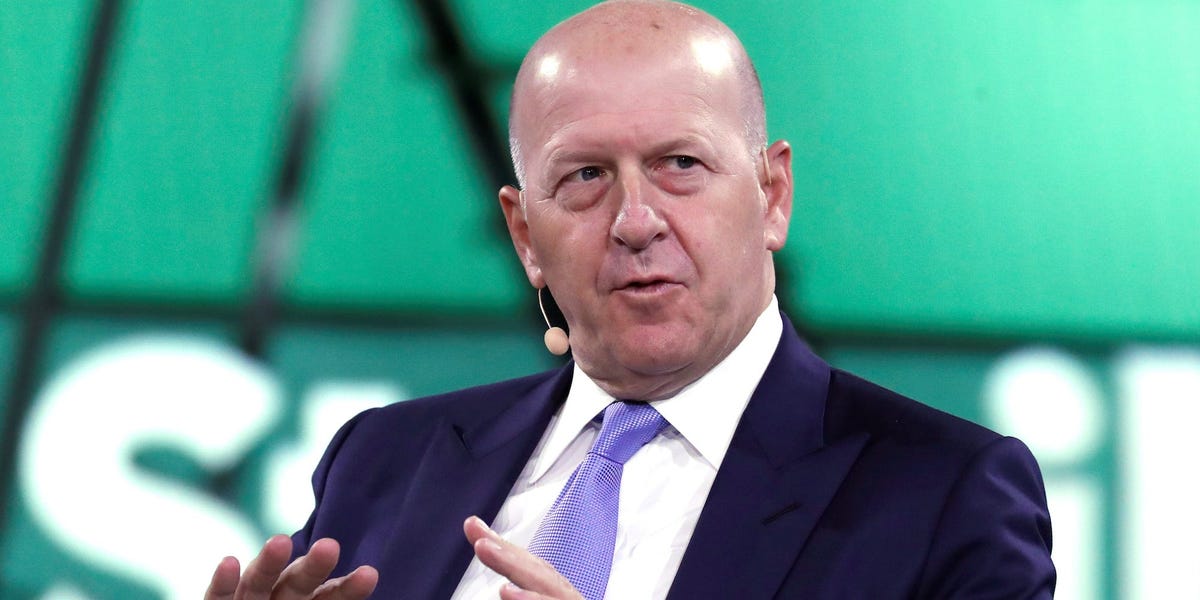 Goldman Sachs analysts broke down their budgets to pitch their bosses on tech and meal reimbursements while WFH. It didn't work.

Insider reviewed a presentation by Goldman analysts from April 2020 in which junior bankers pleaded with execs for help with WFH expenses.

Goldman Sachs analysts expressed concerns over the bank's lack of reimbursement for tech equipment and meal expenses, which they began racking up in the spring of 2020 as a result of the shift to remote work, according to a new leaked presentation viewed by Insider.

The presentation illustrates the strains that those analysts were feeling as a result of working from home, including a line-by-line budget that depicted the heightened out-of-pocket expenses that they had incurred in paying for meals and new work laptops.

Those costs, analysts argued, might have otherwise been covered by Goldman Sachs had they been in the office. For instance, the firm has a policy of issuing junior talent $25 stipends for meals they order if they are working at the office past 8 P.M. That policy did not carry over following the shift to remote work.

The seven-page document is a mixture of analysis, survey responses, and anonymous first-person perspective that was created in late March 2020 and circulated extensively throughout the bank the following month. Multiple sources, including current and former employees of the investment bank, told Insider that a group of 15 first- and second-year analysts within the investment bank's industrials coverage unit were behind the slide deck.

The presentation was eventually viewed by senior investment bank executives, among whom it sparked a dialogue about how to respond, several sources said. However, no concrete steps were taken at the time to implement measures to accommodate the analysts' requests, nor have such measures been taken since, sources said.

Sources spoke to Insider under the condition of anonymity in order to speak freely. Insider verified the sources' identities.

Both presentations highlight the growing discontent among junior bankers across Wall Street. While long hours for young bankers have long been seen as a rite of passage, working from home has presented new challenges.

Goldman's lack of WFH reimbursement was compared to competitors' plans

In the April 2020 presentation, the junior bankers, all of whom are based in the US, noted that they had spent hundreds of dollars buying equipment and paying for food to accommodate the switch to working from home.

The analysts said that they had spent a median of $300 on out-of-pocket equipment costs, such as monitors, mice, and laptops, with the initial shift to WFH.

As many as a third of analysts surveyed said that they did not own a laptop for the purpose of doing remote work before the pandemic. And some 90% indicated that such a device would be essential for their ability to get work done from home.

The median amount of money spent by those analysts who had bought a personal laptop specifically to do company-related work was $1,000, the presentation indicated.

One former analyst interviewed by Insider recalled that when a colleague at Goldman had asked an investment-banking vice president for help with shouldering the technology costs, that VP questioned the analyst and told them that, making their salary, they shouldn't need help from the firm to pay for the equipment.

The analysts also constructed a detailed table that contrasted Goldman's COVID-19 policies — namely, the lack of reimbursements for meals and tech equipment like laptops — with the policies of other banks as of March 25, 2020.

A mixture of both bulge-bracket and boutique firms had implemented equipment and meal reimbursements for employees at the time, according to the analysts' research, with some firms offering to hundreds of dollars in reimbursements.

One source specifically characterized the industrials coverage group as having a reputation within the bank for being "extremely grindy" and work-intensive.

The presentation quickly began to swirl inside the bank, with employees sending it to one another via email as a PDF attachment. But then, at some point in early to mid-April, the survey was found to be blocked on Goldman Sachs' servers, two sources said.

One source said that when they attempted to forward the file onto a colleague in the form of a PDF attachment, they were met with an error message indicating the message was prevented from going through. 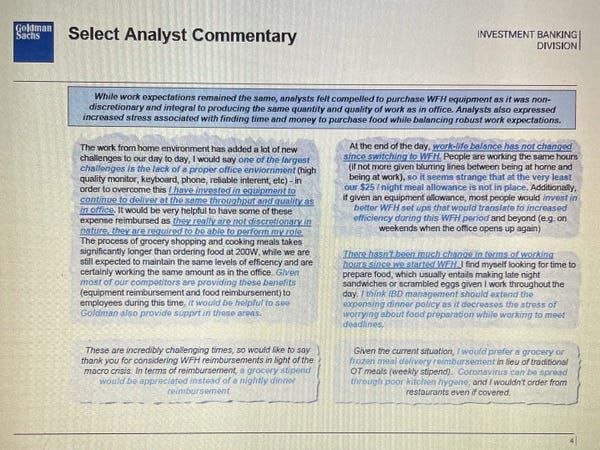 In the newly-unearthed survey, Goldman analysts expressed concerns over mounting costs and workload-related pressures as early as last year.

Included in the presentation was also a line-by-line budgetary breakdown outlining the analysts' living expenses.

They indicated that their monthly income before taxes was $7,083, which would be in line with nearly $85,000 per year. After taxes, plus an average monthly rental fee of $1,927 and other costs, the analysts said that they were left with $873 by the conclusion of a typical month.

With their median work-from-home costs reaching $300, that left them with about $573 in monthly discretionary cash, before student loans and credit-card bills.

Goldman's first-year analysts have a base salary of around $85,000, but including performance-based bonus the total comp can reach closer to $140,000 per year. 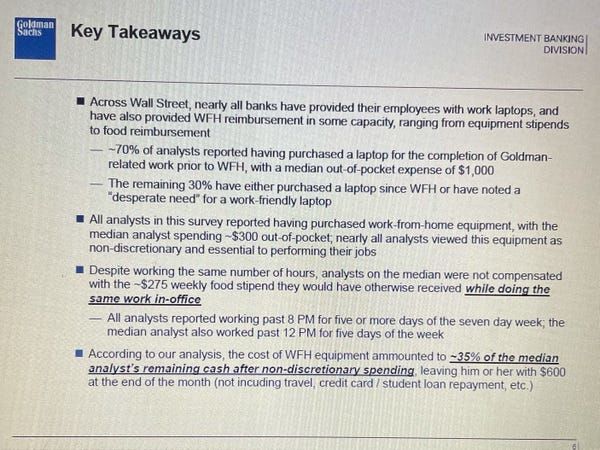 One slide of a leaked Goldman Sachs presentation from April 2020 recapped analysts' mounting expenses paying for the costs of equipment and food to support WFH.

The presentation did reach higher ups at Goldman Sachs.

Bousquette is said to be among executives who discussed its contents with junior bankers directly, several sources said.

As of February 2021, Bousquette took on a new role as the chief operating officer of Goldman's global markets division.

At first, sources told Insider, bank executives deliberated what to do about the presentation. Bousquette is said to have intimated that he was receptive to offering a possible tech reimbursement.

Nearly a year later, no such financial assistance has come, sources told Insider.

On Monday, a representative for Goldman Sachs confirmed the authenticity of the presentation, and said in an emailed statement to Insider: "We are pleased to have built a culture where employees regularly go to management and share their ideas and concerns. We had in-depth discussions with teams across the firm on this, and other measures, as we moved to working from home last year."

"We continue to have an active dialogue with employees on what steps we can take to address specific concerns and requests during this complicated and unusual time," the spokesperson added.

Some analysts' mental and physical health has entered a downward spiral

The February 2021 survey painted a melancholic picture of sleepless junior bankers, many of whom said they felt that they had experienced workplace abuse and were routinely marginalized by bank managers in meetings.

Analysts called the working conditions they faced "inhumane," according to the document. One analyst wrote in the February 2021 presentation: "I've been through foster care and this is arguably worse."

In the meantime, Goldman Sachs CEO David Solomon said he hears the plight of junior bankers.

On Sunday, March 21, he addressed the news about the leaked document from February in a voice memo to staff.

"I can imagine that many of you saw the presentation that a group of analysts shared with their management recently about their lack of work-life balance. This is something that our leadership team and I take very seriously," he said, according to a transcript of his remarks viewed by Insider.

Solomon added that, when he was formerly co-head of the investment-banking division from 2006 to 2016, he helped to implement a rule that would block out Saturdays as a protected day when junior bankers would not have to come into the office.

He added that the bank was now taking "further action" to reinforce that protected Saturday rule, recruit additional junior talent, and transfer reinforcements to "business lines where activity levels are highest."

But he also recognized that employees will continue to be stretched in the demanding days that lie ahead.

"In the months ahead, there are times when we're going to feel more stretched than others," he said. "But just remember: If we all go an extra mile for our client, even when we feel that we're reaching our limit, it can really make a difference in our performance."